In the early 1970s, Ethel Grady Lane returns to her hometown of Sweetheart, Arizona with one thing on her mind: killing the man who murdered her family. But first, she'll have to find him. As Ethel navigates the eccentric town and its inhabitants, she learns that the quaint veneer hides a brewing darkness. She has no choice but to descend into a ring of depravity and violence, with her only ally an Old West novel that follows famed gunslinger Solomon Eaton. 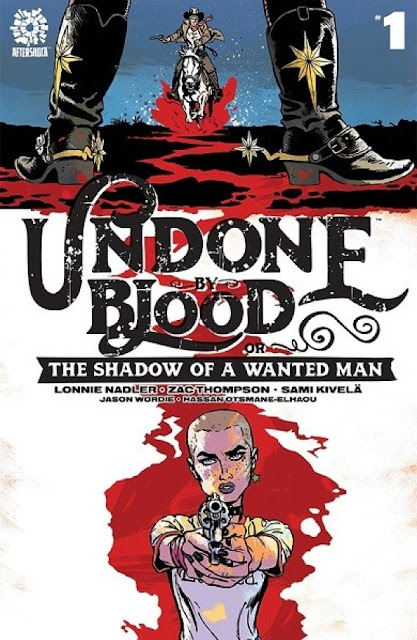 As both stories unfold simultaneously, a love of fiction informs choices in reality, for better or worse. From the minds of Lonnie Nadler and Zac Thompson (The Dregs, X-Men, HER INFERNAL DESCENT) and artist Sami Kivela (Abbot, Tommy Gun Wizards) comes a neo-western that depicts the hard truth of seeking vengeance in the real world.

Western comics are hard to come by. Really good Western comics even more so. However, nowadays stories transcend genres mixing Westerns, with dystopian thrillers, and sci-fi adventures. Gunslingers out for revenge has been a classic plotline for as long as anyone can remember. But 'Undone by Blood or The Shadow of a Wanted Man' is not your typical revenge story. At least not the way Lonnie Nadler and Zac Thompson tell it.

If you can imagine Louis L'Amour and Elmore Leonard collaborating on two stories then having them bound together in one volume then this comes close to what Nadler and Thompson have conjured up here. The story within a story, The Shadow of a Wanted Man, is literally the book that the protagonist of Undone by Blood, Ethel, is reading as she returns to the rural town of Sweetwater, Arizona to find the killer of her family. The issue alternates between the quintessential Western story of Sol Eaton searching for his kidnapped son and Ethel's search for information that could lead to identifying the killer. His is a journey across the Arizona plains encountering threats along the way while Ethel's journey takes place in 1971 in a small town that's well aware of the massacre that took place years before. She uses the book for inspiration and the juxtaposition of both characters looking for justice is perfectly balanced. This type of dual stories that inform each other reminds me of one of the best writers to ever do it in Alan Moore's 'Watchmen.' And by this I mean both stories stand on their own, both are equally compelling.

It's not the first time, Nadler and Thompson have used a piece of fiction to influence one of their comic book characters. In their brilliant Black Mask Studios comic 'The Dregs' (with artists Eric Zawadzki and Dee Cunniffe),  a homeless man scours the city looking for a missing friend using his wits and inspired by his love of detective fiction. It was described as "Equal parts Raymond Chandler and Don Quixote," and it did not disappoint. It was one of the best comics to come out in 2017. 'Undone by Blood' is even more ambitious than that by providing readers with two fully fleshed-out parallel stories that illustrate the beauty of classic Western storytelling and the more modern neo-Western style I like to call "rural noir."

Nowhere is the contrast between old and new school Western displayed than in the beautiful artwork and lettering from Sami Kivela, Jason Wordie, and Hassan Otsmane-Elhaou. The talented and versatile team construct two distinct worlds that look so strikingly different that you won't believe it's the same artists. The scenes portrayed from the novel are softer with cooler pastels that depict a more sparse landscape in more antiquated times. It pays homage to the Western comics of  the fifties like 'All-Star Western.' Coupled with Otsmane-Elhaou's lettering that mimics the text from the novel and you have another entire comic within a comic.

When the story pivots to 1971, the colors are warmer, bolder, sun-drenched in the Arizona heat. Kivela's designs are more realistic, modern, yet grittier and shadowy. The art somehow captures the seedy and grimy feel of cinema from that same era in the places and people Ethel interacts with and visits. The artists transport the reader to the Old West and smack dab in the 1971 Arizona desert. Time and place feel authentic to their respective stories.

'Undone by Blood' #1 is a revelation. It's such a welcomed entry in the pantheon of Western comics that not only pays homage to traditional stories from writers like Louis L'Amour and the art of vintage comics like 'All-Star Western' but transcends the genre to the level of Elmore Leonard's more modern sensibilities. It's engrossing from start to finish with top-notch artwork. This has the potential of being one of the year's best comics.