A savage satire reuniting the critically acclaimed team behind DC's The Flintstones, Mark Russell (Second Coming) and Steve Pugh (Harley Quinn: Breaking Glass), in an all-new creator-owned series! Welcome to Billionaire Island, where anything goes...if you can afford it. But the island's ultra-rich inhabitants are about to learn that their ill-gotten gains come at a very high price. Every AHOY comic also features extra prose stories and illustrations. 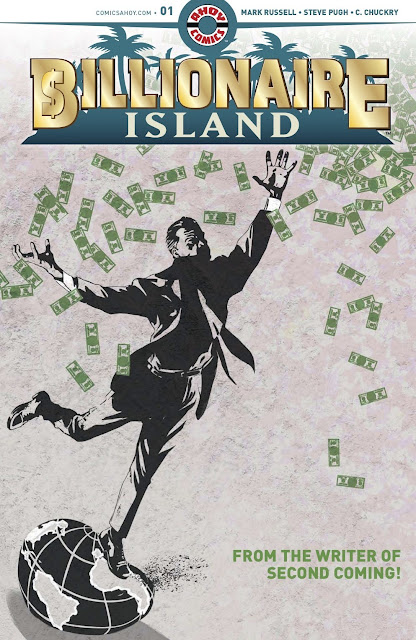 Mark Russell is one of the best writers in comics and also its best satirist. He's done it again with a razor-sharp tale of billionaires run amok on a private island away from tax collectors, immigrants, and refugees. 'Billionaire Island' is as timely as ever and while this story of the 1% sheltering themselves in luxury while society suffers the effects of climate change and food scarcity may have seemed outlandish and over-the-top just a few years ago it's frighteningly plausible in 2020. Russell cuts through the satire by grounding it in some sobering twists. It's the kind of storytelling that Russell is known for. A high concept balanced with heart and soul. Steve Pugh's art captures the gaudy 'Lifestyles of the Rich and Famous' aesthetic perfectly with some darker turns. There is nary a misstep in this outstanding debut issue. 'Billionaire Island' is cutting and funny as only Mark Russell can do it and it's one of the best debuts in comics this year.