Oni Press is pleased to announce the upcoming original graphic novel Dead Dudes from Christopher Sebela and Ben Sears, featuring a trio of ghost hunters who piss off the wrong bunch of ghosts, coming September 2020. 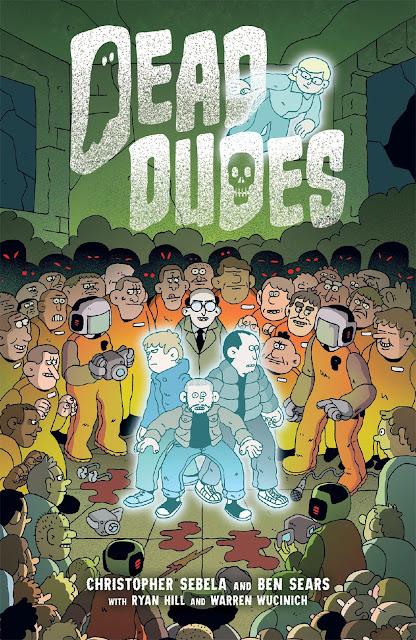 Riffing on the ever-popular supernatural hunter tv shows, Dead Dudes follows Trev, Kent, and Brian — three guys who are allegedly friends, but are best known as the backbiting hosts of the popular ghost hunting show, Ghost Bros. With ratings falling and competition rising, they gamble it all on the Chernobyl of haunted locations: Edgeway Penitentiary, where the Ghost Bros find conclusive proof of the afterlife... After they die and come back as ghosts themselves, trapped there with the angry ghosts who killed them!
Now that they’re deceased, the Ghost Bros have to be the best dead dudes they can be, prove to the world that ghosts exist, and save the lives of their most hated rivals (Oh yeah—and to save the living from a ghostly armageddon. Or whatever).
Featuring art, color, and lettering from the talents of Warren Wucinich and Ryan Hill, Dead Dudes will be available online and in stores on September 16, 2020.
Email Post
Labels: Christopher Sebela