Featuring interviews with some of the comic industries’ best artists, Drawn & Cornered goes beyond the typical interview show. 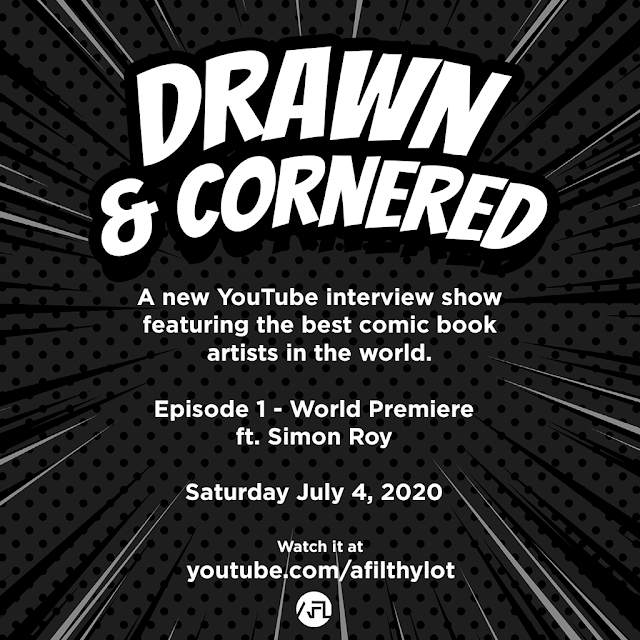 You can watch the first two episodes below!

Drawn & Cornered is a new web-series from Vancouver based content studio “A Filthy Lot entertainment” where host N.A. Razzak will be interviewing both established and up and coming comics artists, while they draw a piece suggested by a viewer. The drawings will then be auctioned off, with proceeds going to a charity of the artist’s choosing. The first episode will air on A Filthy Lot’s YouTube channel on July 4, 2020, featuring guest Simon Roy (Prophet, Protector).
Drawn & Cornered is a partnership between Razzak and Co-Creator Lonnie Nadler, a veteran comic book writer whose works have included independent books such as The Dregs and Come Into Me, and Marvel Comics’ Cable, and The Marvellous X-Men. The two met while working on set in the local film industry and bonded over their shared love of comic books. Razzak says of his co-creator, “Over the years I’ve come to really admire him for chasing his dream of writing and creating comics.”
Born out of show creator N.A. Razzak’s deep and lifelong love for comics, Drawn & Cornered is his homage to the medium that has meant so much to him. Razzak says of his inspiration to create the show; “By the time I was fifteen I had lived in four cities across three countries and two continents, so I was used to change; be it location, school, friends, etc. One of the only constants in my life, aside from my immediate family, was comic books. I could always find a comic shop and my dad was always accommodating of my addiction to art and storytelling, so wherever we were in the world, he always took me to the shops and would buy me comics.”
Email Post