Catrin Vander, a lonely video producer, buys an Artificial Intelligence partner that's meant to bond for life. After ten years together, her holographic wife suddenly discon-nects without a warning. The breakup drives Catrin to the point of near insanity. She's alone for the first time in years and reeling from a loss she can't comprehend. 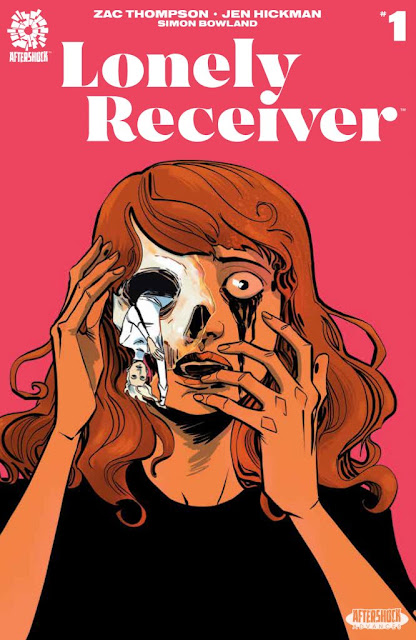 Set in the new future, drenched in pastels and sunshine, LONELY RECEIVER is a horror/breakup story in five parts. Written by Zac Thompson (UNDONE BY BLOOD, THE REPLACER, HER INFERNAL DESCENT, No One's Rose, X-Men) and illustrated in color by Jen Hickman (MOTH & WHISPER, Test).

Relationships can be difficult. Just finding the "right one" can be an arduous journey full of bad dates and dating app anxiety. What if you were able to choose your partner and create them from scratch? Just download a fully functioning soulmate made-to-order to share your life, adapt, and grow. Well, in 'Lonely Receiver' that is a reality, and despite some warm loving companionship, the hard truth is even an artificially intelligent being will eventually get tired of your shit.

Catrin learns first hand that technology can't wipe out the pitfalls that come with relationships. Her spiffy new smartphone comes with the latest dating application - one that manifests your partner like an organic 3D printer. A partner that is customized to your personality and made to be devoted for life. What happens when this sentient being finds itself and outgrows the confines of this coupling? Like any long term love affair, it's devastating when the break-up comes.

Writer Zac Thompson takes our love of devices quite literally and reveals that despite our best efforts and the best algorhythms our phones, like our significant others, won't always love us back forever. It's a cruel concept that hits hard because of how much Catrin echoes the wants and needs of real people trapped in a crumbling relationship. We ache for her in the face of cold resignation from her partner, Rhion. Some horror stories rip out your heart without shedding an ounce of blood.

Jen Hickman's art gives 'Lonely Receiver' its neon-colored futuristic glow while grounding the story with some phenomenal character work steeped in a bevy of emotions. The scene where Rhion is formed from flesh and bone out of thin air will get the most regonition and rightly so. It's straight out of a Cronenberg movie. However, it's Hickman's details in conveying the emotional weight of Catrin's hope, joy and despair through out the first issue that gives the story resonance. Simon Bowland's lettering is consistently rock solid with some creative hurdles he navigates with ease.

'Lonely Receiver' #1 shows us a future that is supposed to make love more convenient and infallible. But like the early days of Apple Maps, the Life-Partner-Operating-System can also lead you to end up in a ditch. If break-ups with real people can be traumatic imagine being ghosted by your A.I. partner after 10 years? Thompson and company have invented a new genre, the modern romantic horror story, and it's frighteningly relatable.