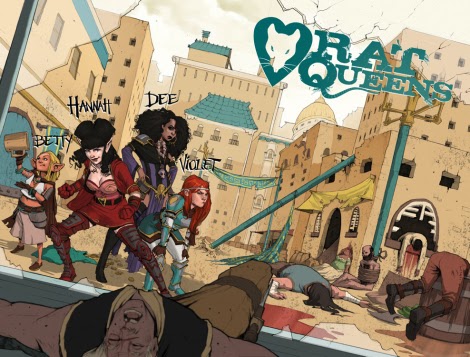 It's no secret that we at Spartantown absolutely love Image Comics' Rat Queens by Kurtis J. Wiebe and Roc Upchurch. We've mentioned how great the sassy shield maidens are here, here and here among other times. Now comes the great news that Pukeko Pictures and Heavy Metal will be adapting the comic book into an animated TV series.

Pukeko has worked on some medieval fantasy themes before, probably the most popular properties ever, on The Lord of the Rings and The Hobbit trilogies. They're also rebooting the kids series Thunderbirds so they have a good eye for popular entertainment.

Rat Queens is described as "a pack of booze-guzzling, death-dealing battle maidens-for-hire, and they’re in the business of killing all gods’ creatures for profit," by the creators and it's darkly funny and action packed. Just the type of property ripe to be animated and shopped to networks like Cartoon Network, FX and Comedy Central.

At least that's what they're hoping. Executive producer Jeff Krelitz from Heavy Metal recognizes the value of having this comic on television.

“‘Rat Queens’ is a standout in the marketplace as a diving rod for fangirls, a market as yet untouched by most comics publishers,” Krelitz said. “It is not only perfect for the TV space, but much needed.”

We couldn't agree more but it's for fangirls and fanboys alike.  Great material shouldn't be exclusive to one gender and Queens is just a great adventure book with wit and charm ready for its animated close-up.