PREVIEW: The Field #1 by Ed Brisson and Simon Roy 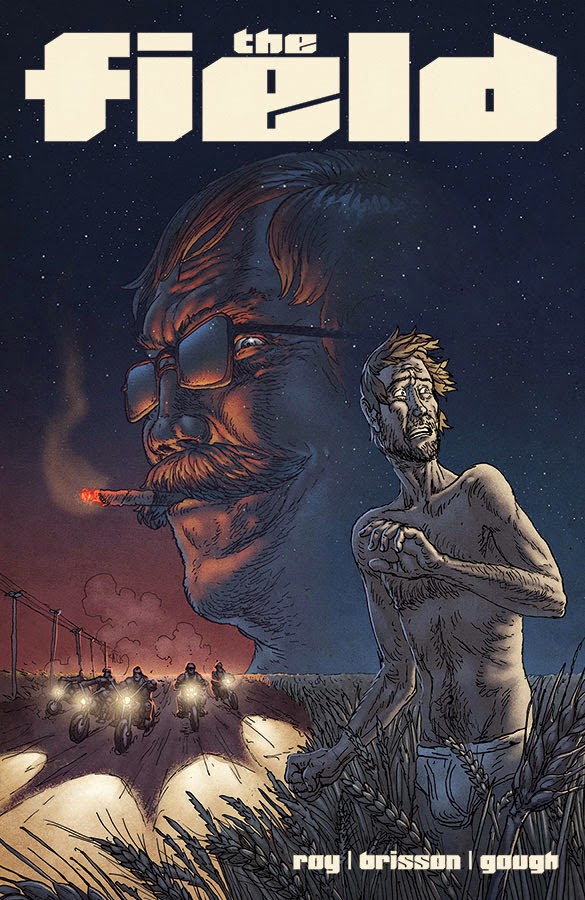 A man wakes up in a field, wearing only his underwear, with no memory, no identity, and no idea what to do. A cell phone beside him buzzes with a message. A single word: “Run.” A deadly cat-and-mouse story ensues in THE FIELD, a graphic novel by Ed Brisson (SHELTERED, COMEBACK) and Simon Roy (PROPHET), out from Image Comics this October.


The man falls into the grips of a Bible salesman on a meth-fueled murder spree in a small town where the rules of civilization seem not to apply. Pursued by a biker gang bent on revenge and a group of cosplayers out to save the world, the man begins to wonder — Is Christian the Bible salesman really his only hope for survival?
Writer Brisson has cited 1980s B-movies like Repo Man as an inspiration for THE FIELD, but the germ of a story came to him as a Twitter prank in after a friend jokingly declared Brisson missing after a night at a bar.
“I just started tweeting about how I’d woken up in a wheat field naked and in the middle of Saskatchewan,” Brisson said in an interview with Multiversity Comics. “And I just tweeted about all this crazy sh*t that was happening to me, how I had this cellphone and people kept calling me on the cellphone and threatening me and sending me text messages that my life was in danger. Then I got picked up by this guy who brought me on a crime spree.”
After reassuring his friends and family that he was not really in danger, Brisson realized he had a story and that Simon Roy would be the perfect artist for it. Roy is the lead artist and co-writer on the surreal re-imagining of Rob Liefeld’s PROPHET with Brandon Graham. Besides a keen eye for the bizarre, Roy brings a loose style that captures the Lynchian atmosphere of the world of THE FIELD.
THE FIELD will be in comic book stores on October 15 and bookstores on October 28 and is available for pre-order now. It has been optioned by Canadian company LaRue Entertainment for production as a feature film. 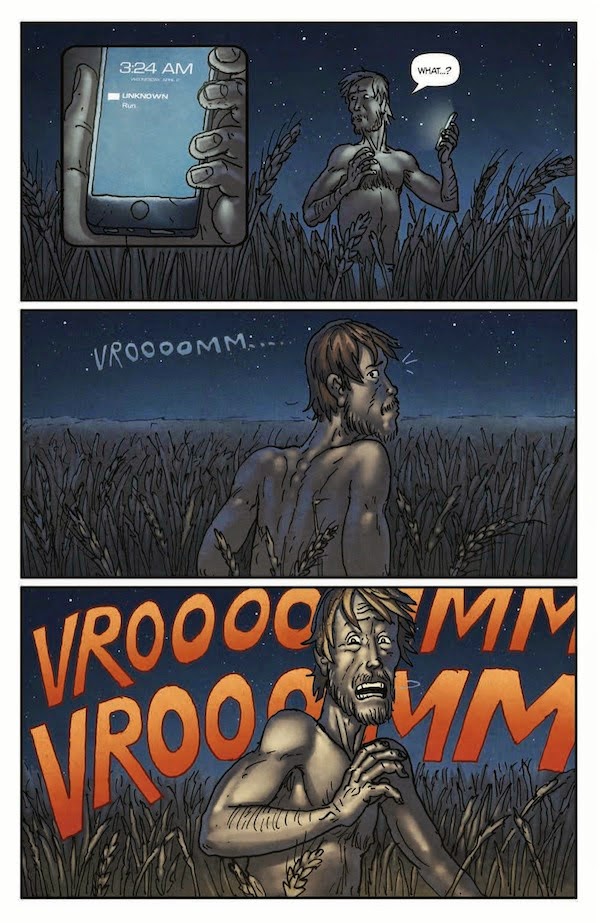 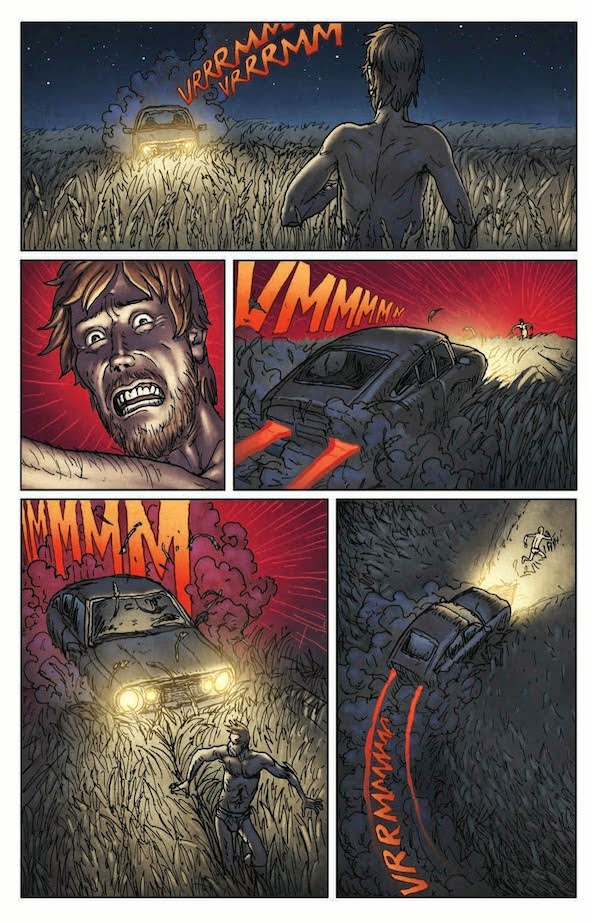 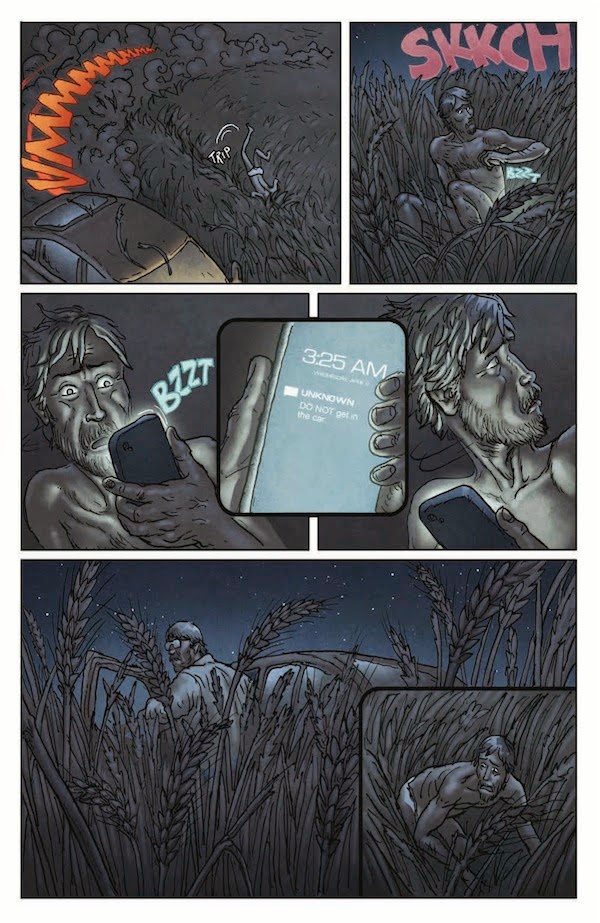 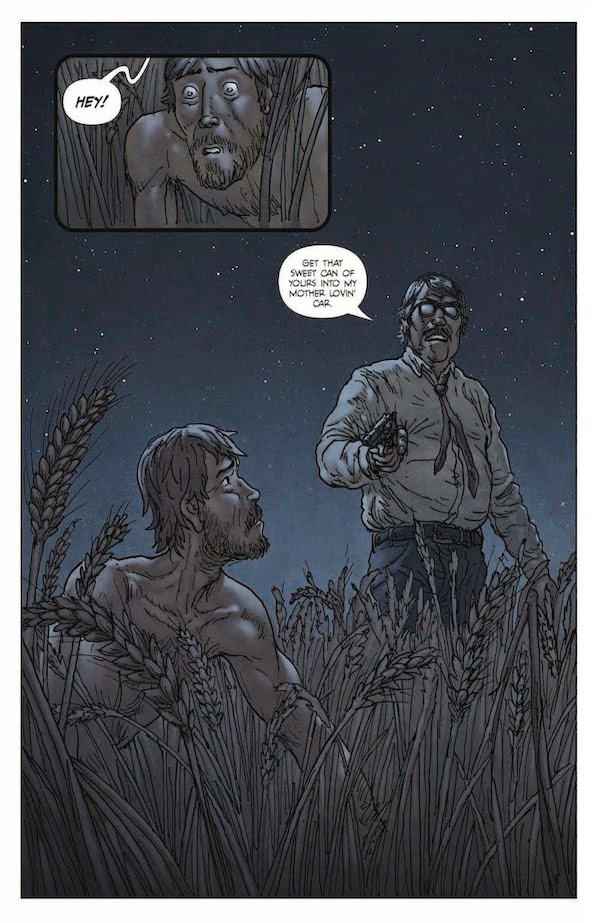