This week is a buffet line of awesomeness. Literally too many great titles out today to mention. Every publisher is putting out their best stuff this week. Do yourself a favor and pick up an indie while you buy the latest Convergence title or Secret War tie-in. Check out this week's notable new releases. 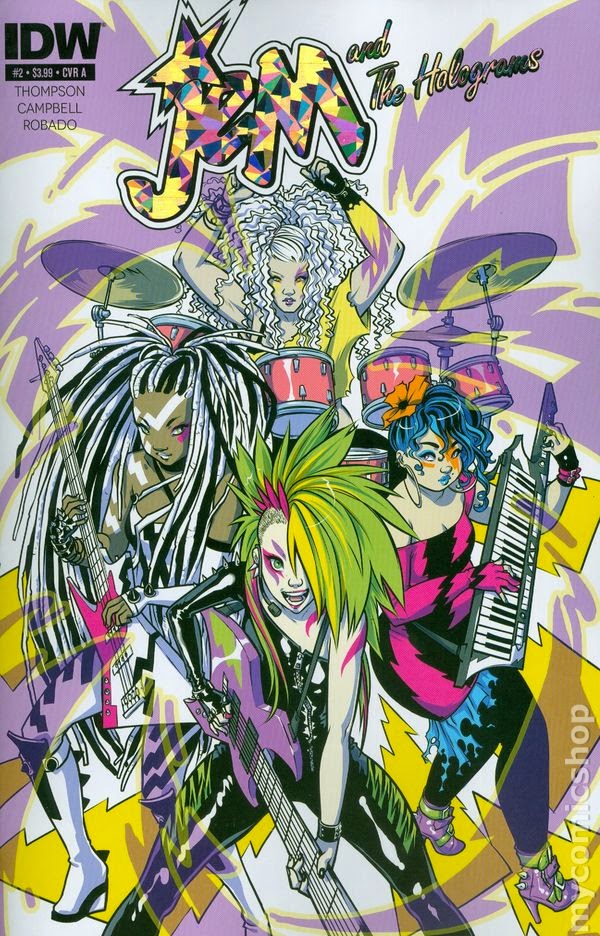 Written by Kelly Thompson. Art and Cover by Sophie Campbell. Truly outrageous! JERRICA BENTON is JEM-but does she have what it takes to lead her underdog band against the mega-popular MISFITS? Cover price $3.99. 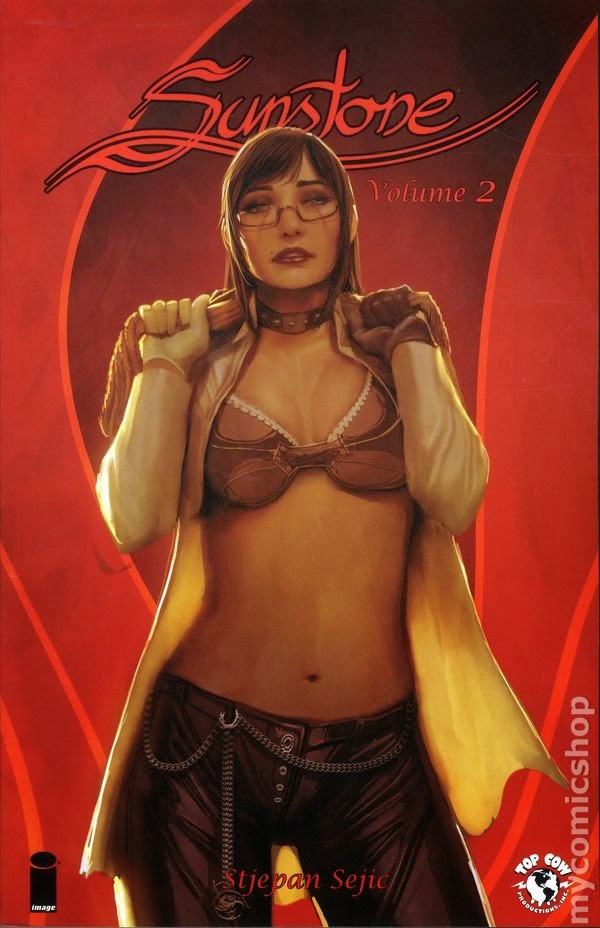 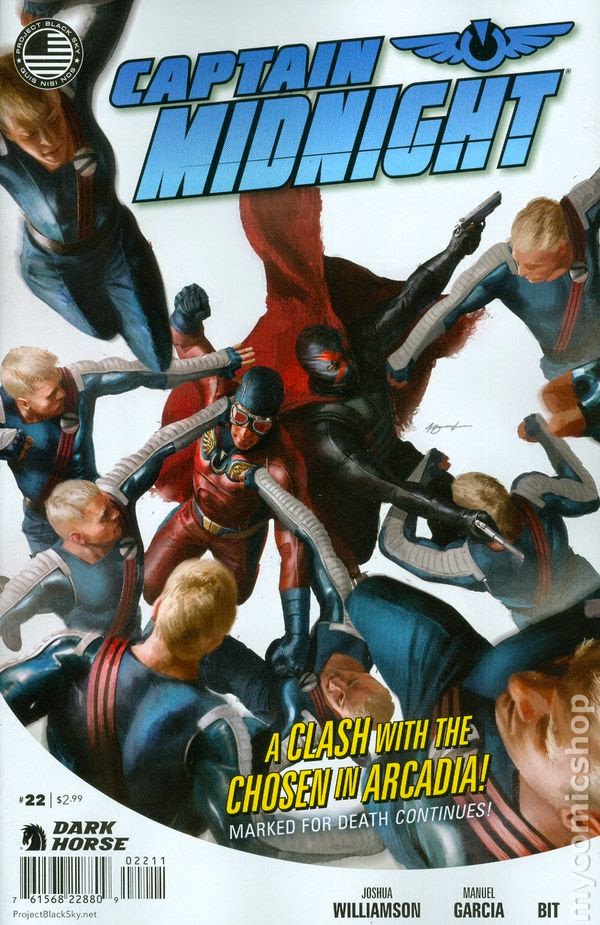 Written by Joshua Williamson. Art and Cover by Michael Broussard. Confronted by a mysterious masked man from the past, Captain Midnight and X have no time to delve into this mystery as übervillain the Archon's powerful warriors, the Chosen, attack! Meanwhile, the Archon's setting other plans in motion that will strengthen his chokehold on our country, our world . . . and our dimension? Cover price $2.99. 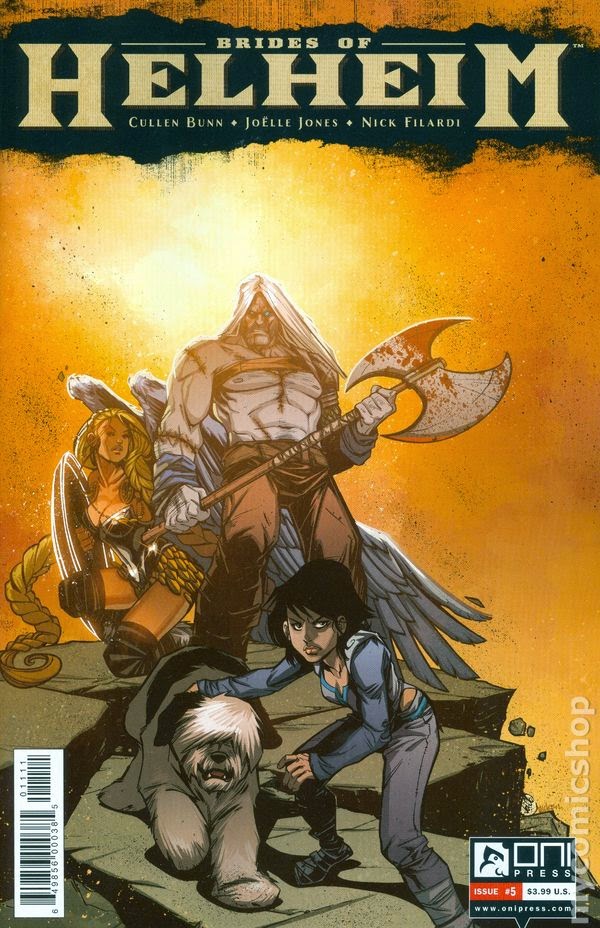 Written by Cullen Bunn. Art and Cover by Joëlle Jones. The battle between Sigrid and Rikard has ended in the most unexpected of ways. Now, the hunt for Raevil must begin, before the warlock unleashes a wave of terror that will make the Witch War look like a pleasant day in Valhalla! Cover price $3.99. 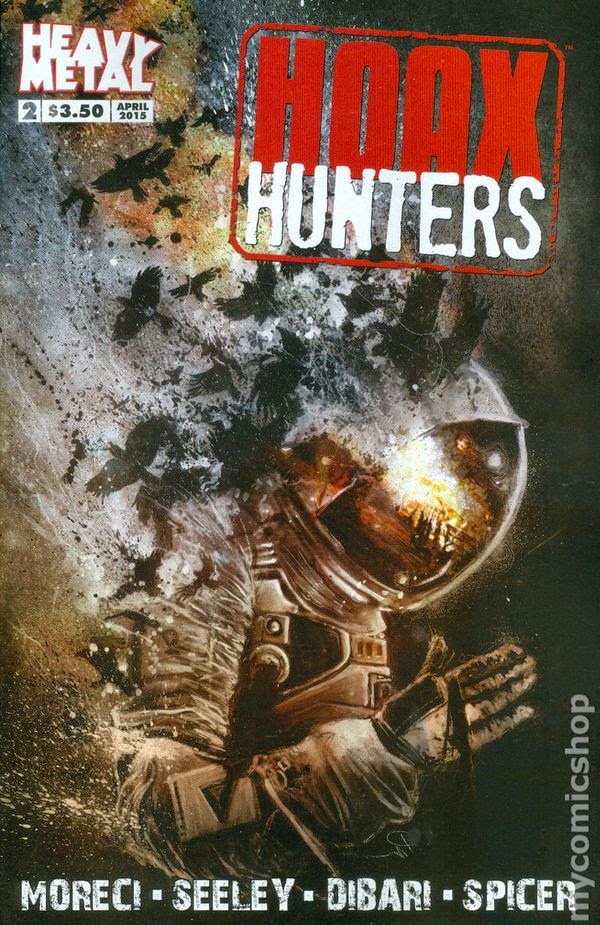 Written by Steve Seeley and Michael Moreci. Art by Chris Dibari. Cover by Rob Prior. Jack and his newfound group of 'investigators' look into a series of grisly murders in their prison dimension home. Meanwhile, the Hoax Hunters team in Paris tries to keep their act together as a powerful French mystic proves to be more formidable an adversary than expected. The acclaimed series continues with Heavy Metal! Cover price $3.50. 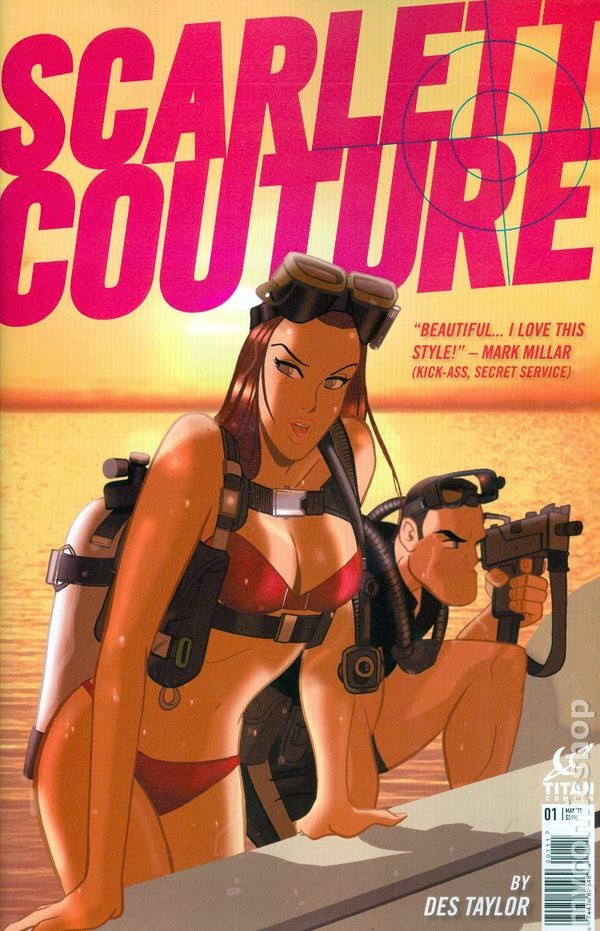 Story, Art and Cover by Des Taylor. Beautiful. Intelligent. Deadly. Scarlett Couture is all of these things, and more. She's a spy. Using her cover as Head of Security for her mother's internationally renowned fashion house, she gathers intelligence for the CIA. In this explosive first issue, Scarlett follows her instincts right into the middle of the action and finds she needs to use all her wits to get herself out of hot water! Cover price $3.99. 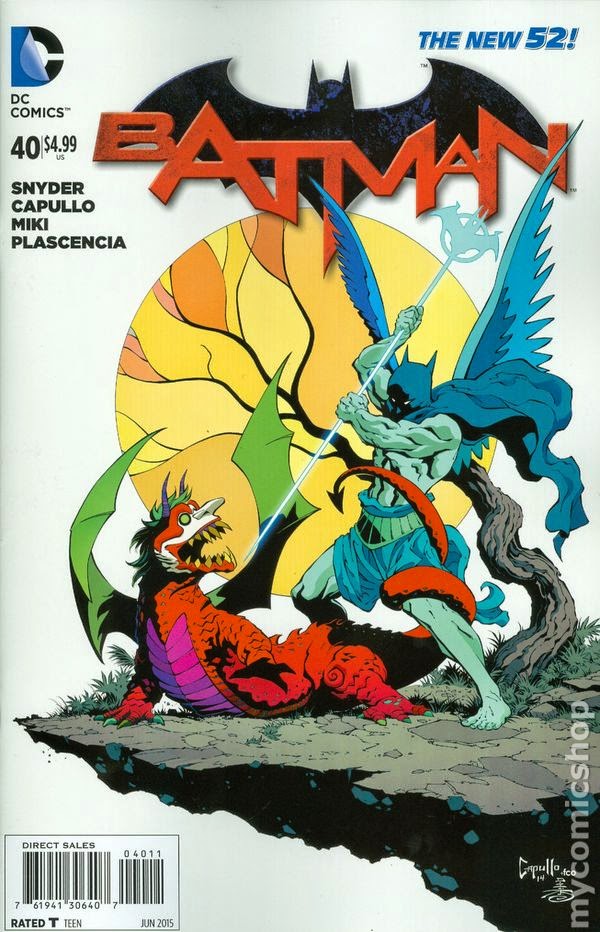 Endgame: The Conclusion - Written by Scott Snyder. Art by Greg Capullo and Danny Miki. Cover by Greg Capullo. The finale of 'Endgame' is here! Batman risks everything against The Joker! Who will laugh last? Cover price $4.99. 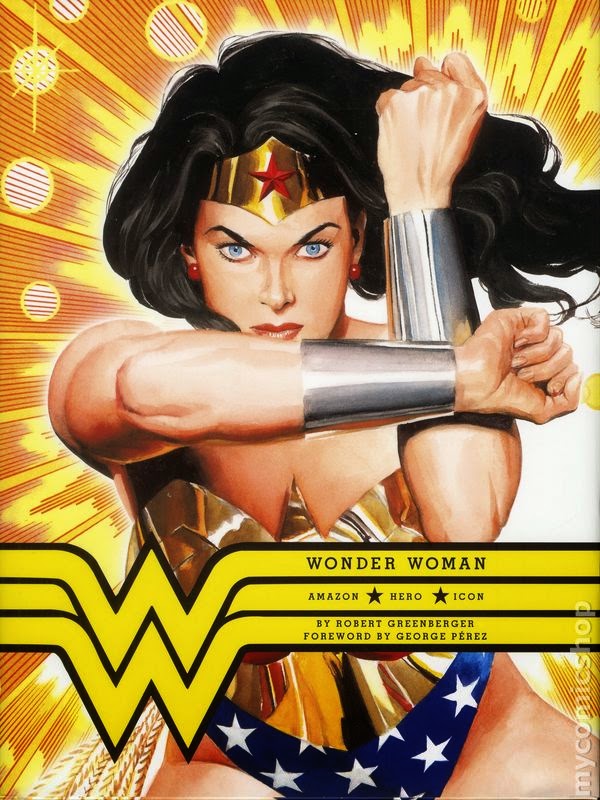 2nd Edition - 1st printing. By Robert Greenberger. Foreword by George Perez. Cover by Alex Ross. Wonder Woman explores idiosyncratic creator William Moulton Marston's interest in ideas of a "new woman" for the twentieth century; costume and character story changes over the decades; the influence on all other female comic book characters since her inception; and how Wonder Woman is still powerful and relevant in today's comic book renaissance. The book contains more than 250 Wonder Woman illustrations, including covers, interior comic art, and sketch treatments, beginning with her inception in the early 1940s to present-day treatments of the character. Hardcover, 9-in. x 12-in., 208 pages, full color. 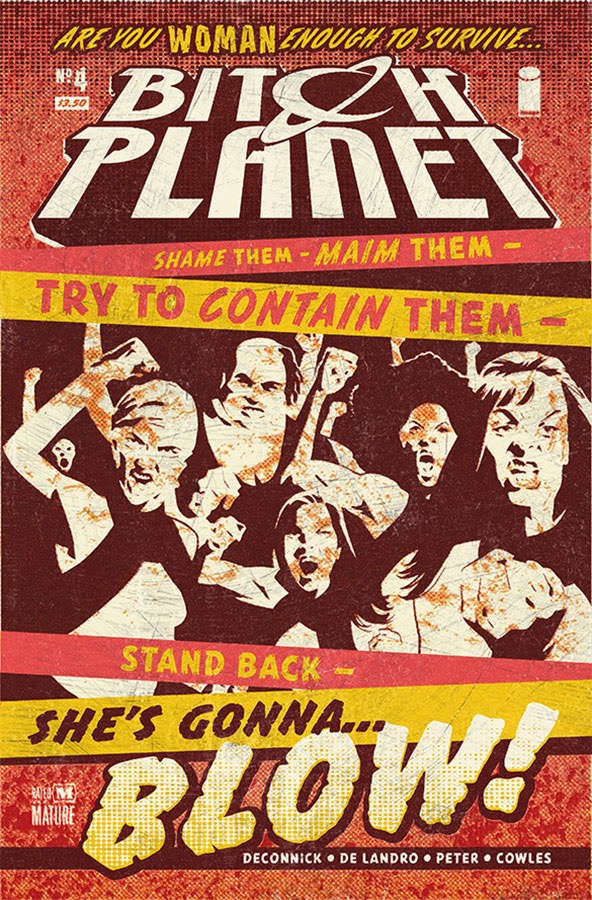 Written by Kelly Sue DeConnick. Art by Robert Wilson IV. Cover by Valentine De Landro. A secret prisoner may be the ringer Kam's girls need if they hope to survive the coming deathmatch. Cover price $3.50. 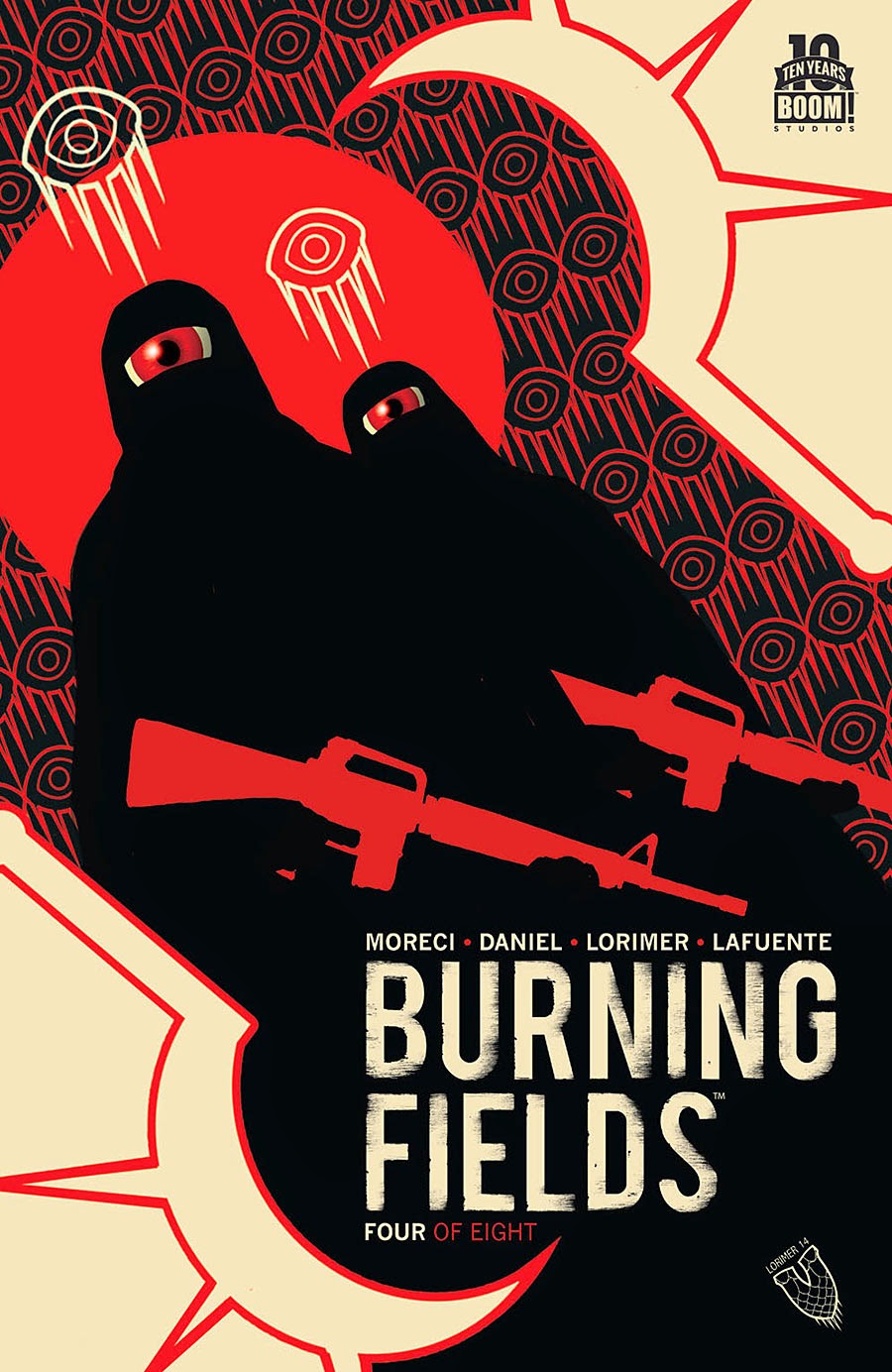 Written by Michael Moreci and Tim Daniel. Art and Cover by Colin Lorimer. Dana and Aban chase down leads through a series of tunnels far from any military base, unaware that Decker and the PMCs are headed the same way, ready for a showdown. But the real threat is something far more sinister than any of them could have imagined. Cover price $3.99. 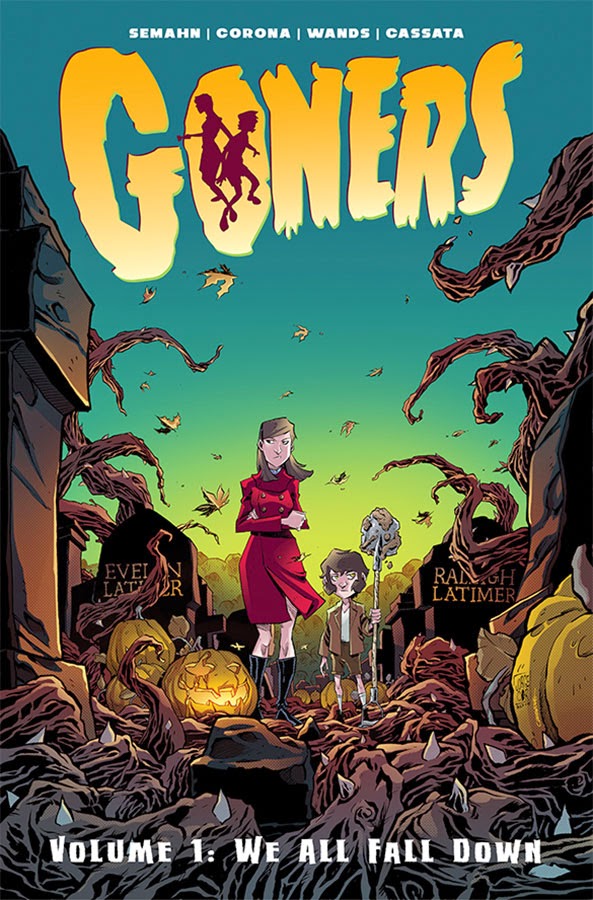 Volume 1 - 1st printing. "We All Fall Down!" Collects Goners (2014 Image) #1-6. Written by Jacob Semahn. Art and cover by Jorge Corona. In a world where the mortal co-exists with the mythic, a single family through the ages stands as the first line of defense against all that go bump in the night. They are the Family Latimer...and this is the end of their story. Softcover, 176 pages, full color. Cover price $9.99. 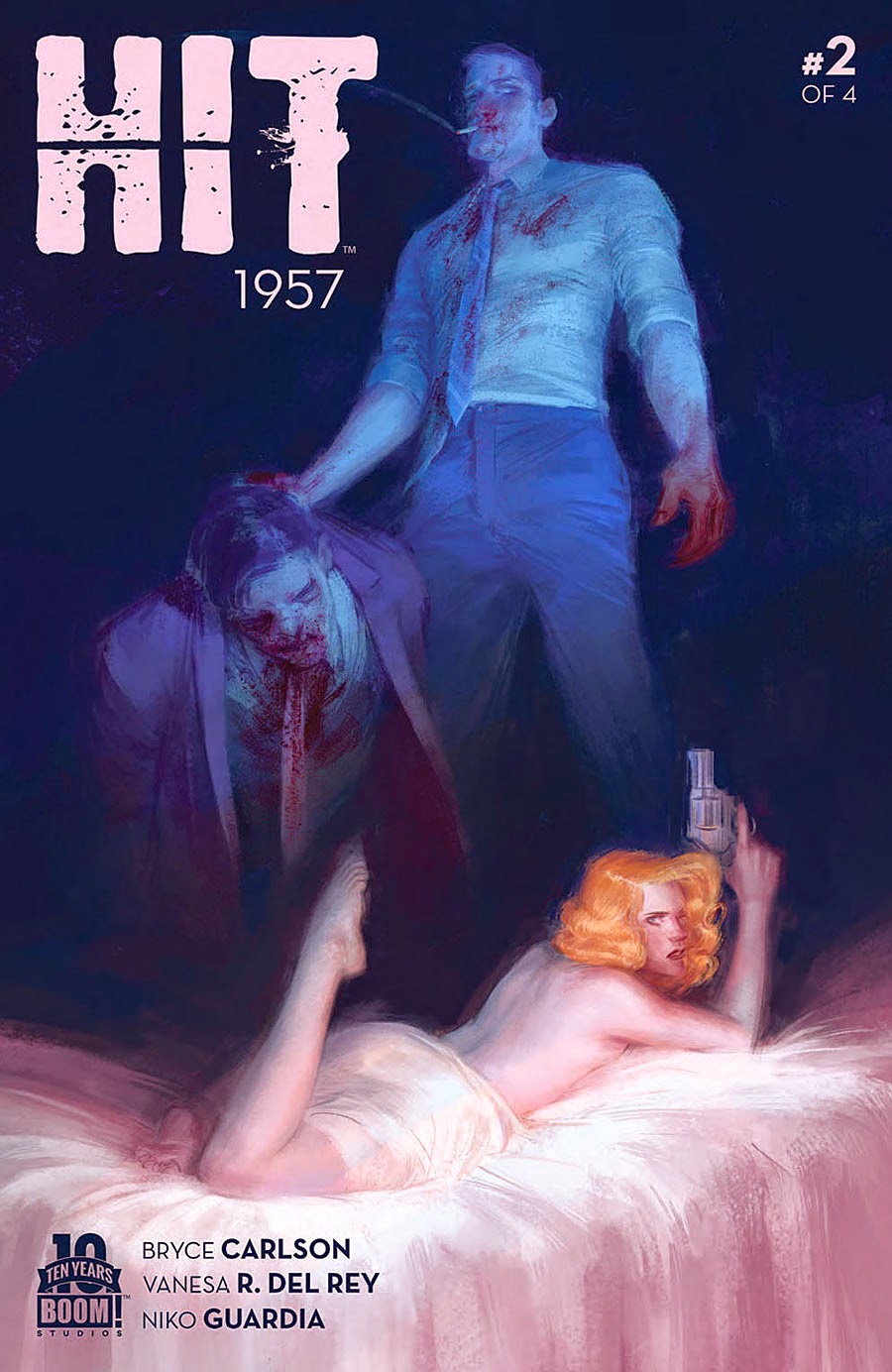 Written by Bryce Carlson. Art and Cover by Vanesa Del Rey. Tensions are building in the new Hit Squad as Sticky deals with the consequences of his actions and his relationship with Slater continues to fray. Meanwhile, Bonnie finds herself falling for the same old trap as she begins to enjoy her time in Las Vegas with her captor, Vincent. Cover price $3.99. 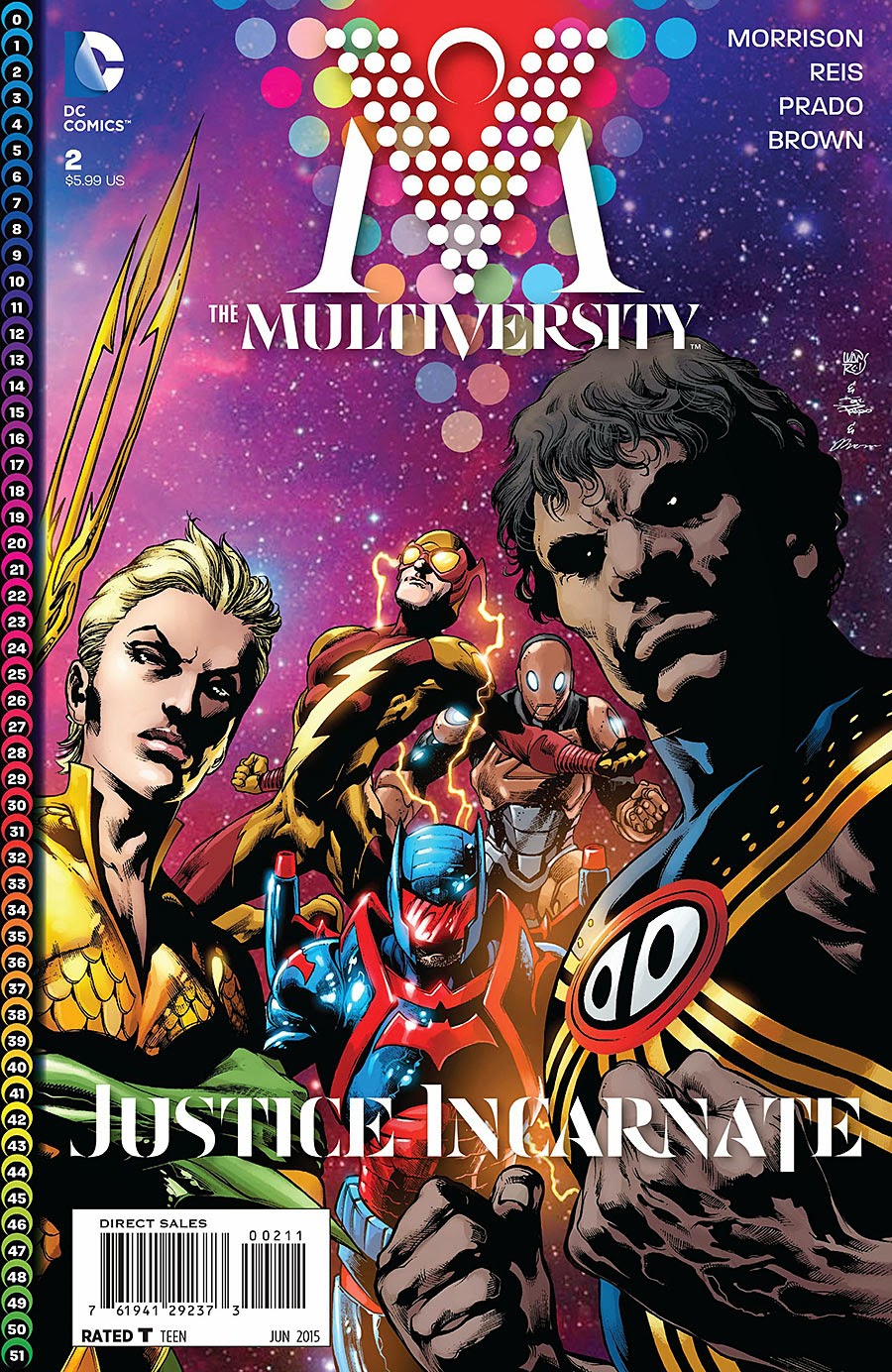 Written by Grant Morrison. Art and Cover by Ivan Reis and Joe Prado. Every event in the history of the DC Universe has been leading to this! The final chapter of the greatest adventure of all time is here! Issue #1 artist Ivan Reis reteams with mastermind Grant Morrison to end THE MULTIVERSITY and bring together the greatest and bravest heroes of the DC Multiverse to fight one last battle. But more than just some cabal of super-villains, they face the greatest evil that ever existed. An evil so massive, they actually may not stand a chance! Who are the mystic Justice League of Earth-13 and what role does their leader Super Demon play in the crisis rising all around them? What shocking secret motivates the dark, nightmare henchmen known as The Gentry? And what is the final fate of Nix Uotan - the Super-God?! You cannot miss this final, stunning chapter of Grant Morrison's ultimate super hero epic! Cover price $5.99. 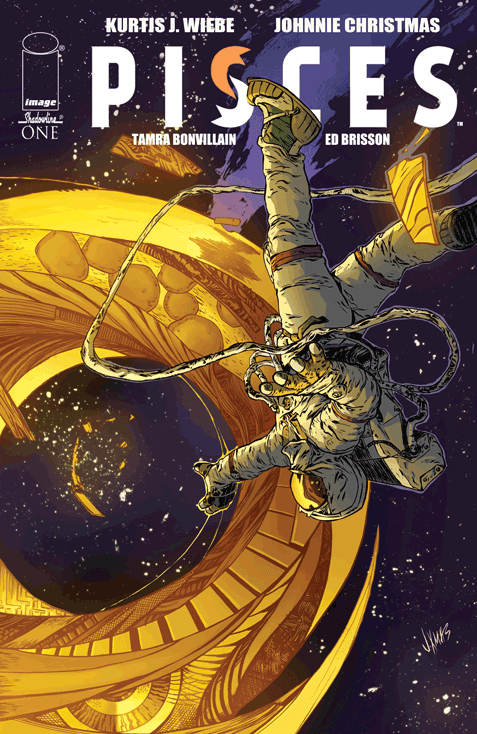 Written by Kurtis J. Wiebe. Art and Cover by Johnnie Christmas. Former fighter pilot Dillon Carpenter found everything he wanted when he returned from the Vietnam War. A loving partner; a dream career training with NASA to travel through space; and soon, he will learn, a prime candidacy for a secret mission, one that will forever change the world: First Contact. But as Dillon prepares, his war trauma returns and he's haunted by dark visions of his future. There is but one constant; the voice whispering from the stars. A sci-fi psychological body horror series from the writer of RAT QUEENS and the artist of SHELTERED. Cover price $3.50. 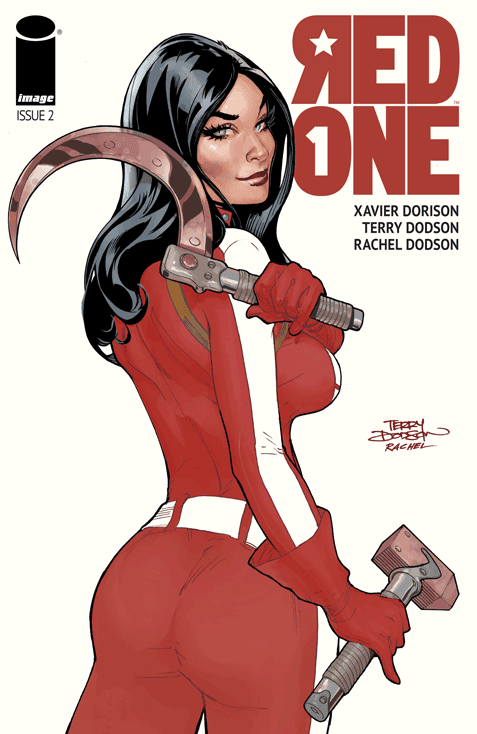 Written by Xavier Dorison. Art and Cover by Terry Dodson and Rachel Dodson. The U.S.S.R.'s top agent, Vera Yelnikov, is working undercover in 1977 Los Angeles as Alabama Jones, a.k.a. RED ONE, America's greatest hero! Red One takes on her fiercest foe yet, the fascist serial killer - THE CARPENTER, in a funky superhero romp. Cover price $2.99. 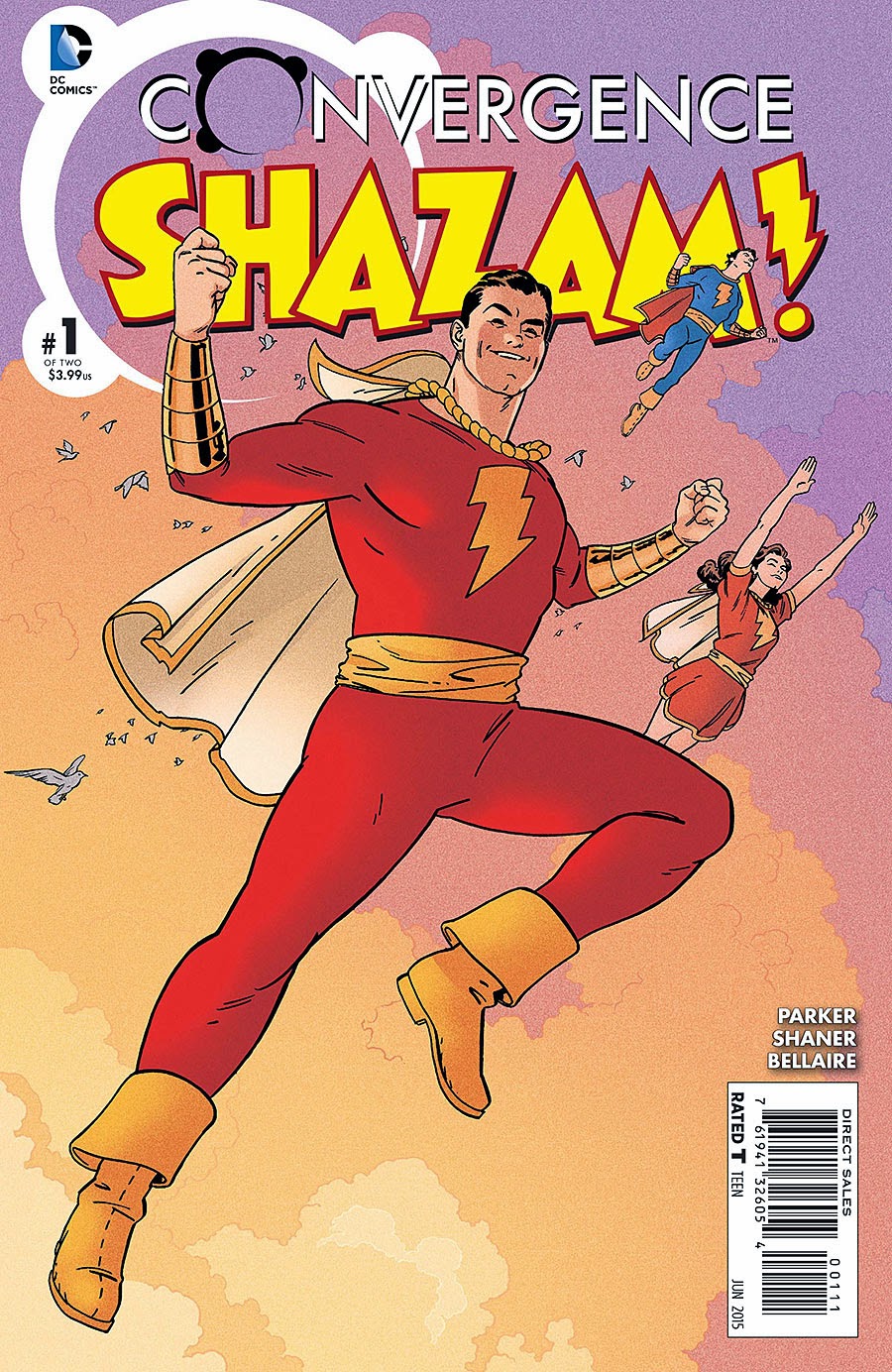 Written by Jeff Parker. Art and Cover by Doc Shaner. STARRING HEROES FROM CRISIS ON INFINITE EARTHS! It's Shazam versus Steampunk, as the world of Gotham by Gaslight takes on the Captain Marvel family and friends! Cover price $3.99. 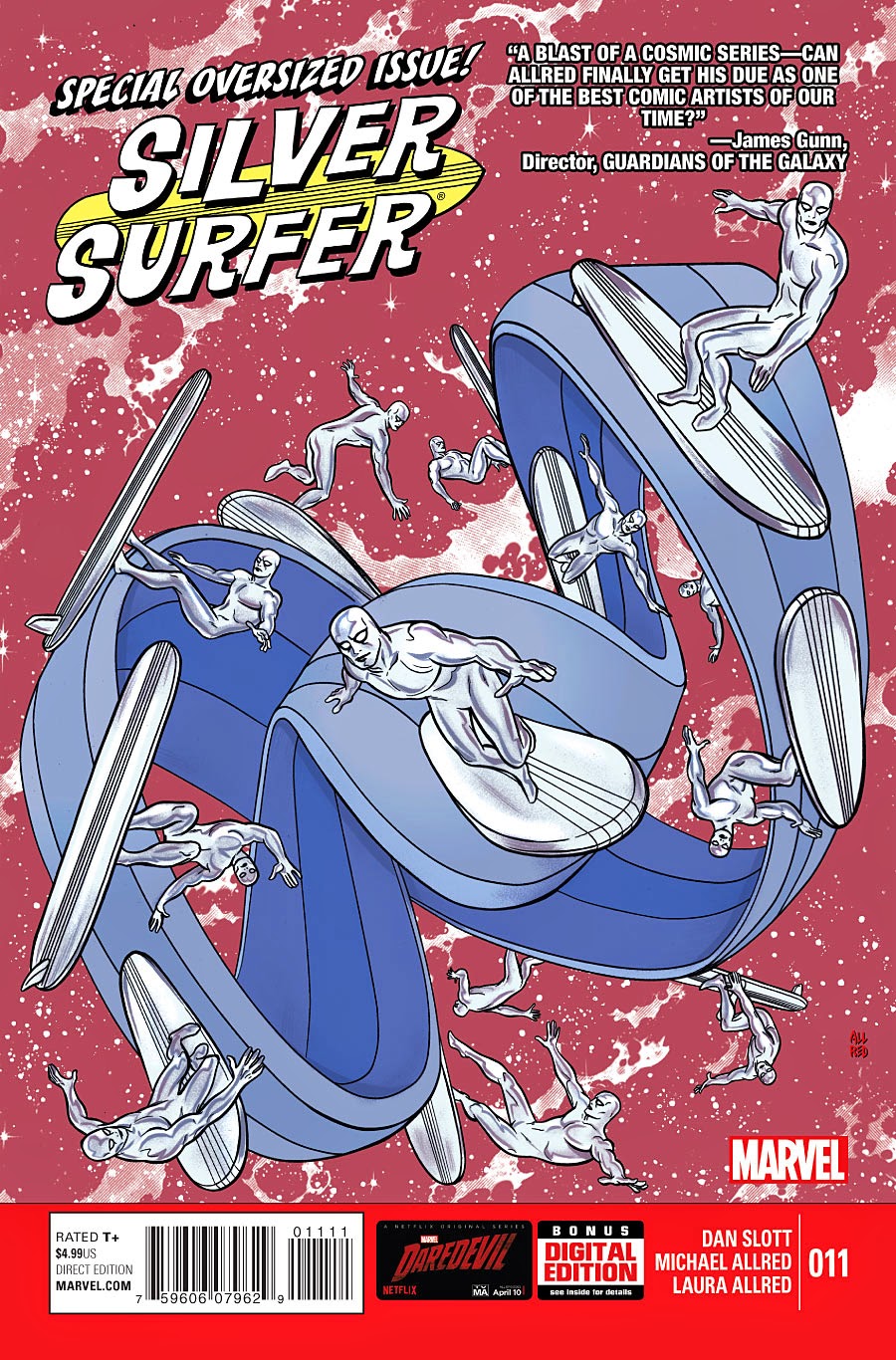 Written by Dan Slott. Art and Cover by Michael Allred. 'Never After' - SPECIAL OVERSIZED ISSUE! Trapped in time, lost in space, with alien threats forever on the attack, and Paradise just outside his reach... ...what terrible price will the Surfer pay to fulfill his most selfless promise? A twist on a Sci-Fi classic that could only be told through sequential art. Forget 'sideways issues' and 'silent issues', Slott & Allred are bringing you a modern-day Marvel comic you'll be talking about for years to come. Rated T+ Cover price $4.99. 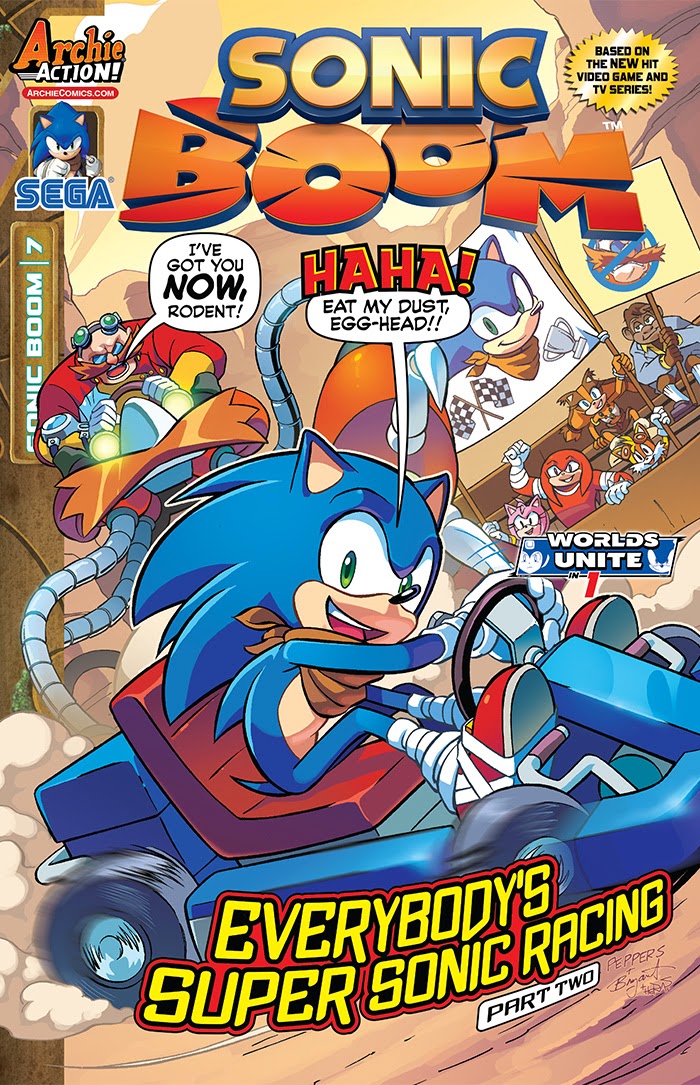 Written by Ian Flynn. Art and Cover by Matt Herms & Various. It's wacky-racin' adventure in 'Everybody's Super Sonic Racing' Part Two: Dr. Eggman's fun and 'friendly' go-kart challenge has turned deadly! But, really, who didn't see that 'twist' coming? Can Sonic salvage the race and prove to the bad doctor he can win fair and square? More importantly, can Sonic survive long enough to return to the race course?! Discover the fate of life, limb and ego in this super-fast story! Cover price $3.99. 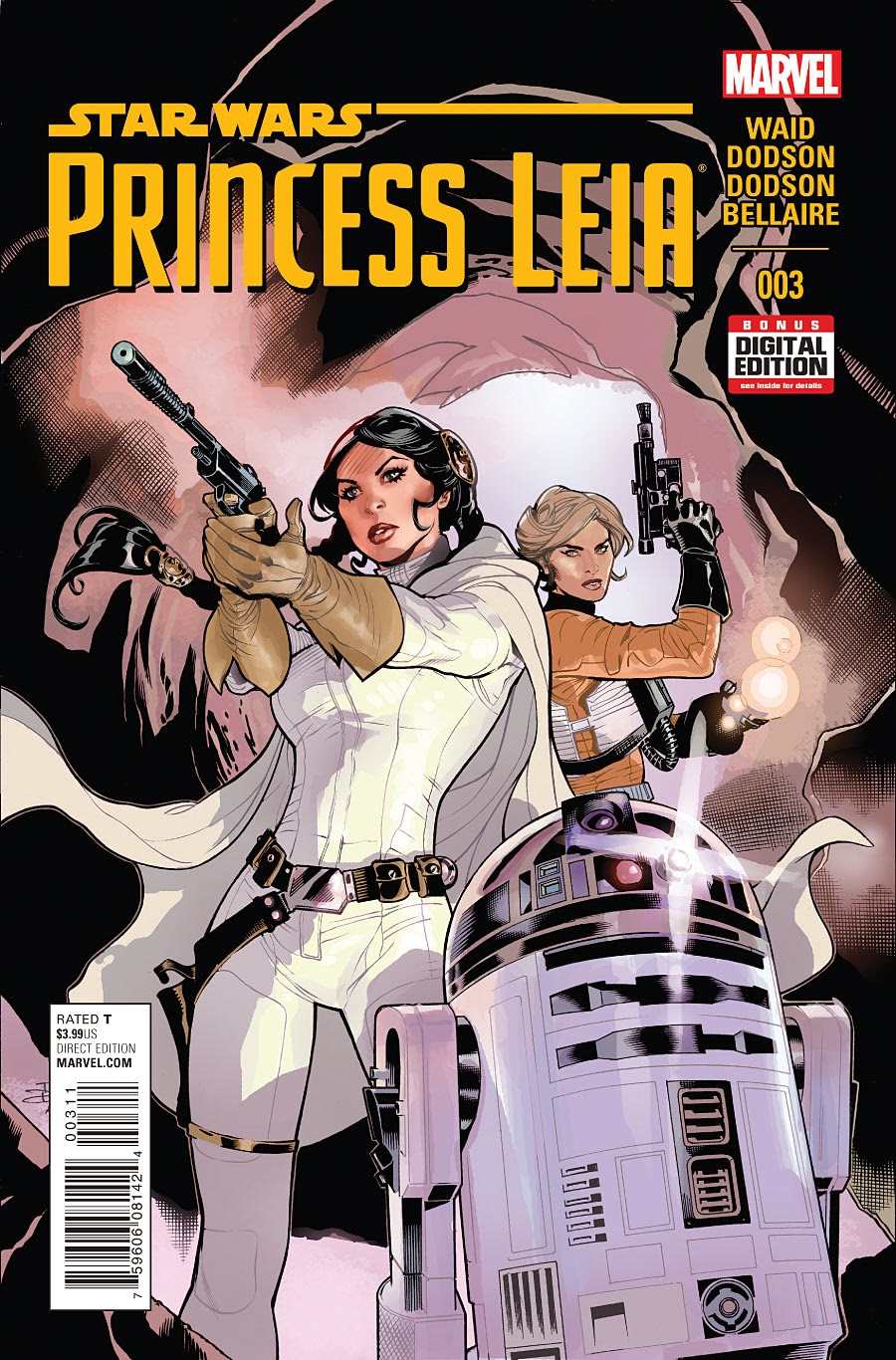 Written by Mark Waid. Art and Cover by Terry Dodson. Leia's mission leads to the underground world of Sullust! The Empire's forces are on her trail and gaining! Join the galaxy's toughest Princess on a quest to save her people! Rated T Star Wars Lucasfilm Ltd. & TM. All rights reserved. Used under authorization. Text and illustrations for Star Wars are 2015 Lucasfilm Ltd. Cover price $3.99. 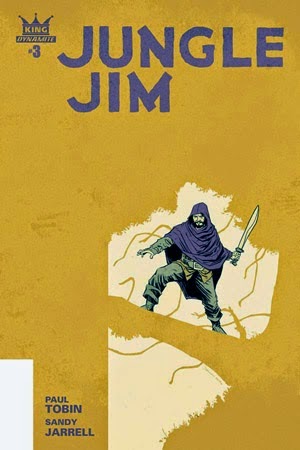 Written by Paul Tobin. Art by Sandy Jarrell. Cover by Declan Shalvey . Bounding gadabouts! Hawk-Men and Rhino-Men and Lion-Men and Snoring-Men and Tragic Reveals and Huge Jungle Fights and most important of all…our main character's biggest worry is that he's run out of whiskey. (Jim's got problems with prioritizing) Cover price $3.99. 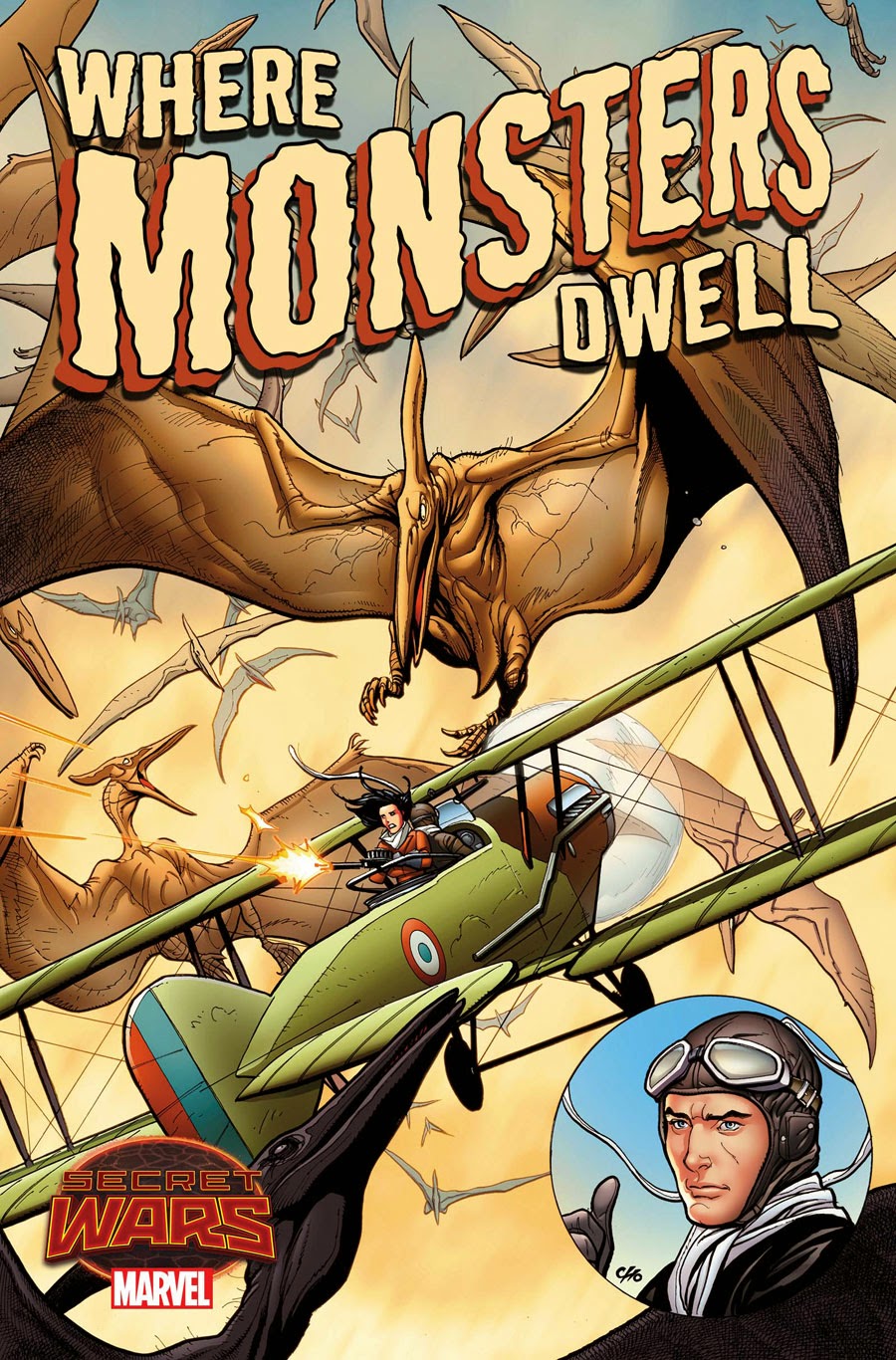 Written by Garth Ennis. Art by Russell Braun. Cover by Frank Cho. Fighter planes and dinosaurs collide in this raucous tale that starts with the classic Marvel character Phantom Eagle and digs much deeper! Cover price $3.99. 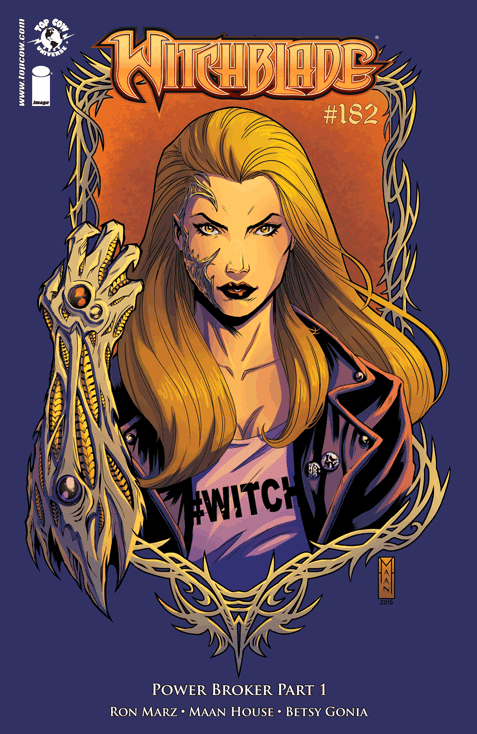 Written by Ron Marz. Art and Cover by Maan House. Mysterious agents have appeared in the small town Sara Pezzini calls home. Their agenda, and the secret power behind them, will change Sara's life forever. The next evolution of the WITCHBLADE saga begins here! Cover price $3.99.