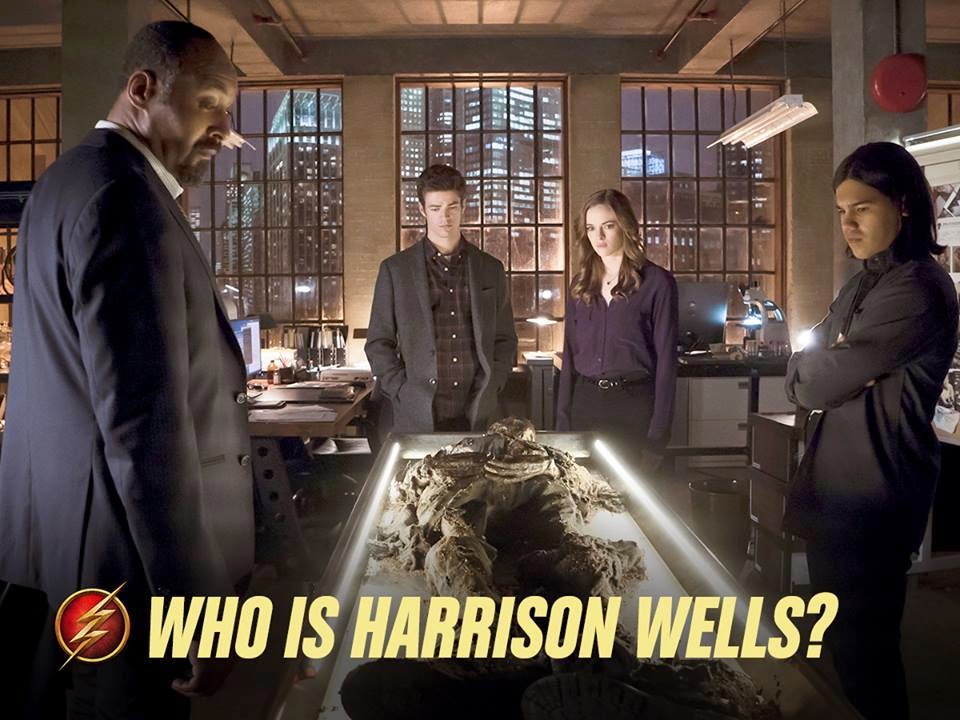 'Who is Harrison Wells?' is the title of episode nineteen and for viewers that question is easy to answer. Not so much for our beloved characters of The Flash. Joe and Cisco continue their investigation and it leads to another crossover in Starling City with Captain Lance. Caitlin isn't so convinced of her mentor's guilt, but Barry is determined to prove it. Meanwhile, there's a shape-shifter  running around Central City. It's a great set-up episode with a killer cliffhanger.


Joe asks Captain Lance for help locating the site of the car crash Harrison Wells was involved in that cost Tess her life. It also gave the two parents of daughters a chance to trade advice. The usually bitter grump on Arrow, Lance seemed more open to a different perspective on parenting considering his icy relationship with Laurel because she kept Sara's death a secret.

Laurel enlists the help of a star-struck Cisco to help the Black Canary with Sara's sonic device. He gladly helps her and somehow created a slimmer more effective "Canary Cry." I've stopped questioning where and how he makes the time and materials to do what Cisco does especially during this road trip. Just go with it.

At the crash site, Cisco is able to track down the buried body of the real Harrison Wells. Joe convinces Lance to keep this revelation under wraps for now. I haven't seen Lance this reasonable in a long time. The speed at which this investigation is moving is leading up to a major showdown. You can just tell as the things we know about "Harrison Wells" dawns on Team Flash.

Well, everyone except Caitlin who still believes the Wells she's always known to be a supportive and conscientious mentor. She makes a strong case considering all the time and care he took when Barry was in a coma after the particle accelerator blew. She's going to need some hard evidence.

It's kind of funny that they're trying to convince Caitlin of the truth while hiding it from Iris. By the end, Caitlin learns that Wells died in that car accident through DNA tests and whoever is Wells now is up to no good. Hopefully, Iris will learn the truth soon so we could stop playing her for a fool in the show's weakest storyline.

For a bright guy, Barry pulls a major boner when a shape-shifting metahuman frames Eddie for shooting two cops. Eddie is arrested yet Barry doesn't question him showing up at his doorstep. The Everyman, as he's sort of called, knocks Barry out. This leads to him impersonating Barry and having a very awkward make-out session with an uncomfortable Caitlin.

While shape-shifters might be an easy comic book trope, when done right, like in 'Who is Harrison Wells?' it can be a fun, trippy experience, and the excellent special effects on the show make the transitions seamless. However, this week's villain didn't have much of a grand plan. He started with a robbery and spent the rest of the episode on the run and playing Team Flash members. Although, the fight scene with Barry as the Everyman started to change into different people and as Iris for an extended time throwing kicks and punches was pretty cool.

It was all meant to get everyone prepared for the next episode. Barry, Cisco, and Caitlin find the secret room, the Reverse Flash suit, and the future headline. Everyone's on board that this Wells is bad news and now they're up to speed with the audience as there's a showdown looming against the Reverse Flash. The Flash knows how to get the pulse racing and cliffs hanging, or something like that. Needless to say, the next episode will be epic!

See scenes from next week, 'The Trap.'


Is Team Flash ready to face Eobard Thawne? Don't miss a new episode of The Flash Tuesday at 8/7c!