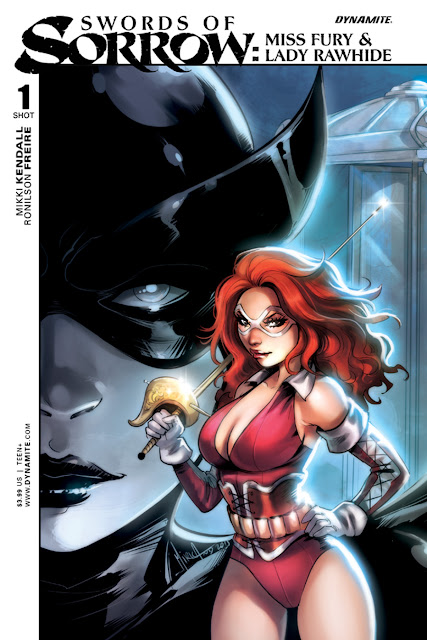 Dynamite Entertainment, in response to the public's overly positive reaction to Gail Simone's Swords of Sorrow crossover event, is proud to build upon the enthusiasm with an all-new one-shot special entitled Swords of Sorrow: Miss Fury / Lady Rawhide, bringing together two iconic comic book heroines. Dynamite is also announcing that a special cover variant of Swords of Sorrow #3 has been created to celebrate the cosplay phenomenon, featuring four cosplayers in a reenactment of J. Scott Campbell's cover from issue #1. 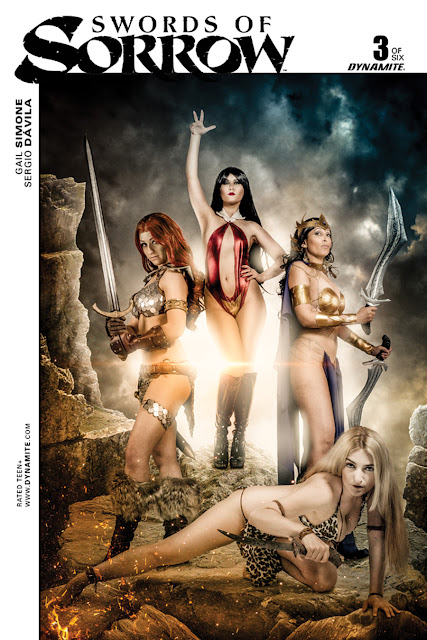 The photograph featured as the Cosplay Edition of Swords of Sorrow #3 was the brainchild of cosplayer Tabitha Lyons, who approached photographer Andrew Dobell of Creative Edge Studios with the idea to reenact the cover to Swords of Sorrow #1, as illustrated by industry superstar J. Scott Campbell. The original cover depicts four stars of the series: Red Sonja and Vampirella (two characters with long traditions of comic book adventuring), as well as literary heroine Dejah Thoris (from the Warlord of Mars novels and comics) and Jana from Frank Cho's Jungle Girl. The photo reenactment features four lovely cosplayers: Tabitha Lyons as Red Sonja, Tasha Mackenzie as Dejah Thoris, Chiquitita Cosplay as Jungle Girl, and Mojo Jones as Vampirella. Fans and cosplay enthusiasts everywhere can look for this cover edition to hit stores on July 8th. 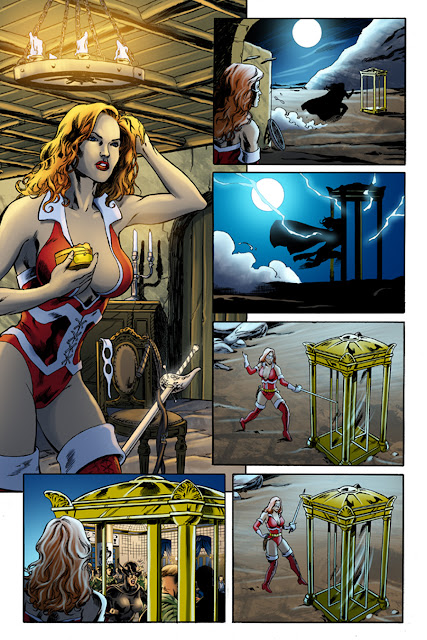 Gail Simone was especially excited by the creation of this photo edition, and the dedication of Creative Edge and the cosplayers themselves. "This is kind of a dream come true for me," says Simone. "So many times, at conventions, I've seen magnificent cosplayers beautifully photographed in these incredible poses, and I've often thought, 'Wow, that should be a cover.' But it never seems to happen! Then I saw this shot, just as a thumbnail, on social media, and it was so perfectly realized, with cosplayers so spot-on and just so all-around gorgeous, at first I was convinced it was a painting of the cover of our first issue. It took a moment to realize the depth of their remarkable re-creation. I love it, and I'm thrilled to have this be our first cosplay cover. I hope it's the first of many. Incredible work to everyone involved, the cosplayers, photographer and costume maker all are astounding!"

Slated for release in September, the Swords of Sorrow: Miss Fury / Lady Rawhide special unites the rebellious Western heroine of yesteryear with the unpredictable -- perhaps dangerously so -- costumed crime-fighter, whether they like it or not. Written by Mikki Kendall and illustrated by Ronilson Freire, the one-shot comes with a cover by artist Mirka Andolfo. 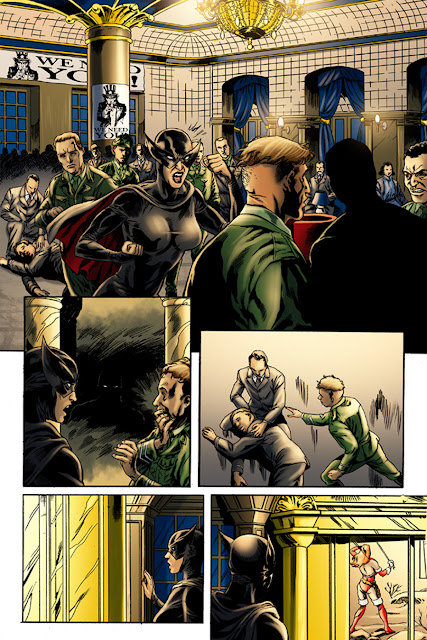 Regarding Swords of Sorrow and her contribution to the event, Kendall says, "Any time you get a chance to fulfill a childhood dream of writing comic books, it is of course very exciting. To be able to do it as part of the Swords of Sorrow event with such an amazing group of women writers is unreal. When this project first came up, I was afraid to get my hopes up, and I have been pinching myself throughout this process because I get to work with such fabulous writers. Between Gail Simone, Nancy Marguerite Bennett, Leah Moore, Mairghread Scott, Emma Beeby, Mikki Kendall, Nancy A. Collins, and G. Willow Wilson, it's like a master class in being a woman in comics. I love being able to take a cheesecake character like Lady Rawhide and show her really getting her hands dirty, and taking Miss Fury on a wild ride right alongside her. Getting to play in a shared world and really let my imagination run wild for the story was so much fun. And the villains...you have to really love being able to set up such wonderful conflicts for characters that don't get as much love as they deserve." 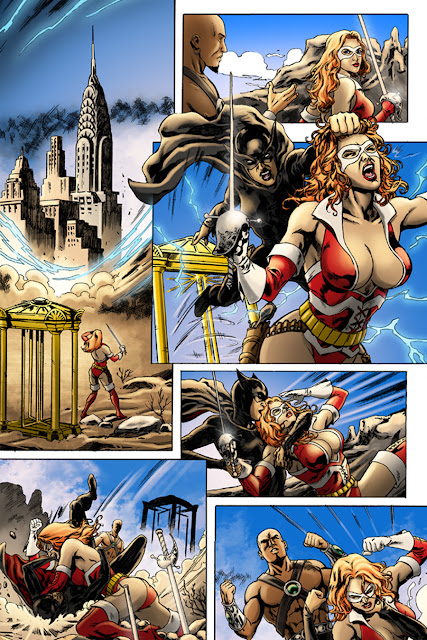 Swords of Sorrow and related titles are solicited in Diamond Comic Distributors' Previews catalog, the premiere source of merchandise for the comic book specialty market. Comic book fans are encouraged to reserve Swords of Sorrow with their local comic book retailers. All Swords of Sorrow titles are also available for individual customer purchase through digital platforms courtesy of Comixology, Dynamite Digital, iVerse, and Dark Horse Digital. 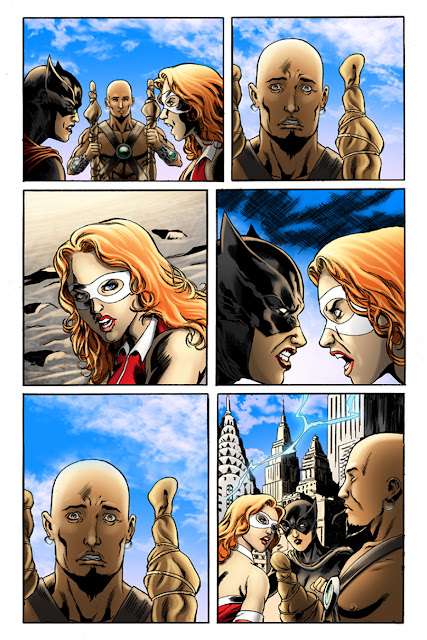 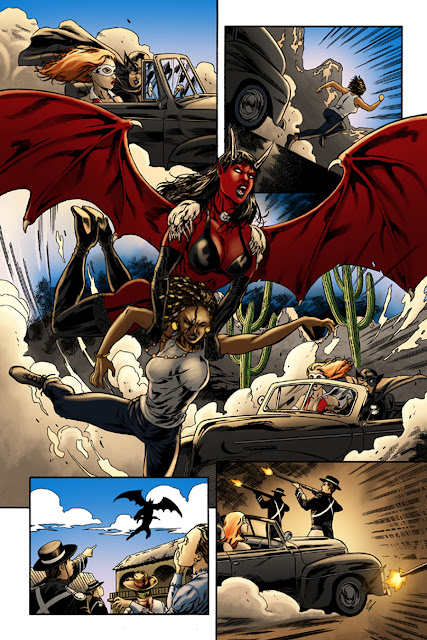