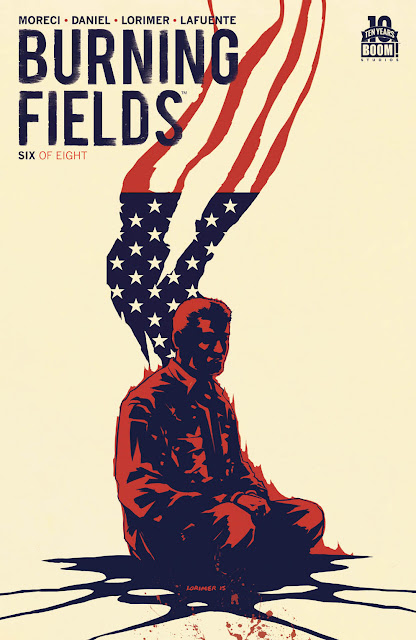 All hell breaks loose this month in Burning Fields #6. If you've been waiting for the supernatural subtext to come bursting to the surface this is the issue for you. The thrilling political/military crime procedural has been one of the most compelling comics of the year and now it shifts gears into all-out horror. It not only ramps things up as it heads to the conclusion of its eight-issue run, issue six helps solidify Colin Lorimer as one of the best artists working today.


Decker is back and more dangerous than ever. The Verge and Decker are on a rampage with Dana and Aban caught in the middle as the military contractors take on Carapace. It's a game-changing event that takes this already excellent title to new heights of terror and suspense.

Michael Moreci and Tim Daniel have developed the characters so well to this point, the art team can fly unbound in this mostly action-packed issue. Lorimer, Joana Lafuente and Jim Campbell go to town illustrating a dark, dreadful, onslaught of evil through a balance of design, color and letters. Lafuente masterfully manipulates light and shadow with great contrasts in some scenes and then a monochromatic spectrum in others. She adds amazing depth and texture with seemingly simple tweaks in hues. Campbell uses distinct and creative word balloons to chilling effect when the horde goes on the warpath.

I know comics are a collaborative affair, but I'm going to assume Lorimer designed the layouts. As the "cinematographer" of the issue, Lorimer provides not only great art but even greater art direction resulting in a powerful visual style. The type of cinematic angles and perspectives that draw you in, bringing you deeper into the action, leading to a terrifying claustrophobic chill that runs deep into your bones. Lorimer has found a way to suck the reader in with dynamic panels and intricate lines that mesmerize and shock.

There aren't enough superlatives to describe Burning Fields #6. It has become a must-buy since its debut. It has evolved from dramatic political thriller to a supernatural horror story. And it's been a seamless transition because the creative team work in unison. With tense tight plotting and atmospheric visuals, Burning Fields is grade A storytelling.