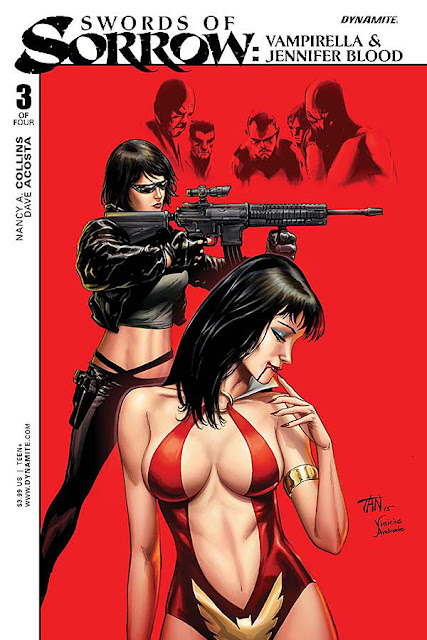 Jennifer Blood is hot on the trail of the person she thinks is trying to frame her for murder. She thinks it's Vampirella but before she can determine that she has her hands full of the narco gang "Los Muertos" and suddenly Swords of Sorrow: Vampirella & Jennifer Blood #3 becomes the bloodiest, action-packed issue in the series so far.


This issue really focuses more on Blood than Vampirella but she makes her mark as well. Blood's relentless and aggressive thirst for justice by any means necessary along with her cockiness reveals a vigilante like few others. Writer Nancy A. Collins seems to relish the constant exposition of her kick-ass heroine as she tries to figure out what's going on.

Blood enjoys taking down the bad guys enjoying he reputation for it almost as much. She loves to put the scare into her prey. What is refreshing to see also is her character design by artist Dave Acosta. She's ready for warfare in her tactical gear, boots, and flak jacket. You don't really need or should want to sexualize her in any way when you have a half-naked Vampirella as your backup. She's also tastefully designed as the action and Blood's bravado carries the story.

It's a bloody and violent confrontation against the gang's leader, Calavera, and the action is swift and deadly. Acosta lays out the shootout with smooth transitions from panel to panel, developing a rhythm of beats set to the gunfire. It's a gripping and heart-pounding sequence of chaos and bloodshed.

It's not all shooting and stabbing. Blood and Vampirella have a nice rapport despite the suspicious circumstances they've been brought together. It may be Blood's show in issue three, but Vampirella provides a nice balance with her matter-of-fact tone and level-headed warrior mentality.

Swords of Sorrow: Vampirella & Jennifer Blood #3 succeeds as the best in the series because both characters are at their best. Blood and Vampirella make a great team who aren't afraid of anyone or anything. It makes for an exciting, white-knuckle read that punches you in the gut and keeps you asking for more.