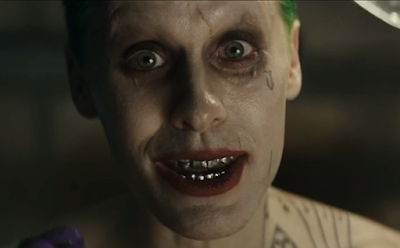 No need to seek out a blurry, shaky, bootleg version of the Suicide Squad trailer shown at this past weekend's Comic-Con because Warner Bros has relented and released an HD version for your viewing pleasure. Embarrassed by the amount of piss-poor quality videos leaked online, the studio gave in and released an official trailer on Monday.

Today we will release the same footage that has been illegally circulating on the web, in the form it was created and high quality with which it was intended to be enjoyed. We regret this decision as it was our intention to keep the footage as a unique experience for the Comic Con crowd, but we cannot continue to allow the film to be represented by the poor quality of the pirated footage stolen from our presentation.

The statement came from Warner Bros' marketing chief Sue Kroll whose exasperation over the leaked footage was palatable. The trailer begins with Amanda Waller (Viola Davis) explaining the need for Task Force X and then a montage of scenes includes a caged Harley Quinn (Margot Robbie), a shirtless Deadshot (Will Smith), and the others in a moody, dark, seemingly miserable landscape.

The video lightens up with Harley in the Joker's sports car with Batman on the roof and at the very end we get our first glimpse of Jared Leto as the Joker himself. "I'm not going to kill you. I'm just going to hurt you really really bad."

All in all, it's everyting we expected from a DC Comics-based story about imprisoned supervillains enlisted by a government agency to go on a deadly covert mission in exchange for their freedom. It's grimy, dirty, explosive and action-packed. It has director David Ayer's name all over it.

And yes, Robbie and Leto as Harley and Joker look amazing and ready to steal the movie.