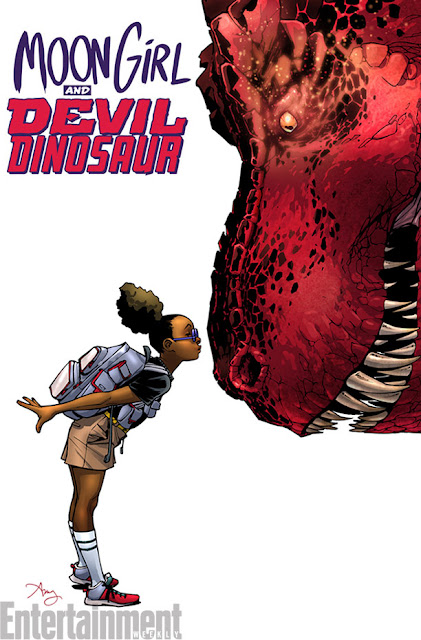 Jack Kirby's red T-Rex is returning to comic book stores featuring this time an awkward and brilliant prodigy in Lunella Lafayette for Marvel's Moon Girl and Devil Dinosaur. Moon Boy from the original series will return for a spell mostly in flashback but the creative team of writers Amy Reeder, Brandon Montclare and artist Natacha Bustos is hoping to fill a void for young readers while still appealing to readers of all ages according to editors Mark Pannicia and Emily Shaw.

“Mark and I were talking about how whenever people come in with young kids, or even just for Mark’s own kids, we don’t have that many publications that we can give to people that have that broad reach,” Shaw explained to Entertainment Weekly. “Generally, we’re skewing a little bit older with a lot of our titles and we wanted to create something that adults and kids could really love, like a Pixar feel. That’s where the tone jumped off for us.” 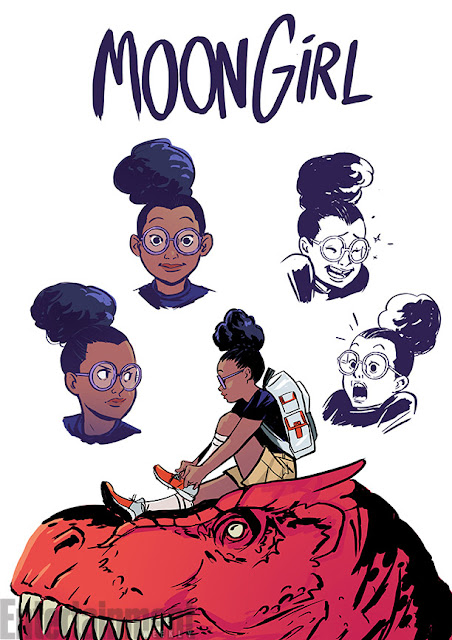 This post-'Secret Wars' title also presents an opportunity for creative freedom with an older and obscure property while at the same time broadening the appeal of the book with a girl of color as its lead. The diversity also carries over to the talent behind it.

“There’s definitely a cool factor with some of the obscure characters, just because it’s so fun to work on,” Montclare said. “It’s great to work on Wolverine or Spider-Man or stuff like that. But like Amy said, when someone’s not watching too closely what you do, it’s also just creative freedom for cool stuff. You can do stuff that really motivates you, rather than giving another great Spider-Man story that feels like all the other Spider-Man stories.”

Despite Marvel's efforts to diversify their comics both on the page and behind the scenes, they've stumbled expressing exactly how they'll do that. It's lead to some awkward and condescending discussions from Marvel but they have made strides with characters like Kamala Khan as Ms. Marvel and Miles Morales as Spider-Man. Unfortunately, it hasn't always carried over to the creative teams. The team behind 'Moon Girl' is an exception and representation is something that isn't lost on Bustos.

“I also feel a great responsibility, as I’m sure Amy and Brandon do…it’s great to be a part of the creation of something which can mean something special to so many people,” she said. “I myself have come up against this dilemma (I’m half Afro-Brazilian and half Chilean besides being Spanish) of finding few or no cultural references, especially in Spain, a country where there is isn’t any community comparable to the African American community in the states. You end up ironing out your differences and you need to work hard on this aspect to be able to continue maturing as a person.”
“For decades now, we have seen more independent publishers taking a gamble on diversification, but always within the underground scene,” she explained. “It’s really important that the mainstream throws up new references like these and it’s an honor to be a part of that change that Marvel is bringing to the comic book creative landscape. A greater number of readers are looking for characters they can identify with, and above all, with the aim that any reader, whatever their background or lifestyle, is capable of transcending their own identities to see themselves in a mirror of entertainment for 20 or 30 minutes without any difference.”

Reeder described Lunella’s character as a “female Inspector Gadget — only this time, she also knows what she’s doing. Moon Girl is definitely a type of personality that I had in my mind for a long time, that hopefully people can identify with in different aspects,” she revealed. “We all feel isolated or left out at times. So it’s been a joy to try to create something like this.”

Montclare and Reeder are updating the story of a planet full of dinosaurs and cave dwellers living together in an alternate universe and putting Lunella and her Devil Dino in the center of New York City.“What’s really cool is to be able to put a Tyrannosaurus Rex in modern day New York City and also juxtapose with a little girl,” Montclare said. “You’re going to have a 30-foot dinosaur interacting with a three-and-a-half tall girl…I can’t think of any other book that’s kind of like that, where you have these kind of crazy things that are going to be very different to work on. But if everyone can pull it off, it’s going to be a unique type of storytelling.”
Email Post
Labels: Amy Reeder Brandon Montclare comic books Marvel Moon Girl and Devil Dinosaur Natacha Bustos