Another new comic book day is upon us and there's plenty to choose from in all genres. Batman Annual #4, Wonder Woman 77 Special #2, Grayson Annual #2, and Ghost Racers #4 got you covered from the Big Two on the superhero side. Zodiac Starforce #2, The Adventures of Aero Girl TP and Archie #3 offers some fantastic all-ages stories. Indies get edgy with Postal #7, Southern Bastards Vol. 1, Stringers #2, and so much more. Check out our notable books for this week and our slideshow set to music! 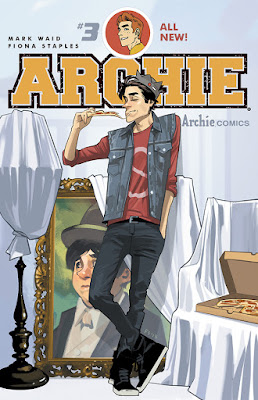 Written by Mark Waid. Art and Cover by Fiona Staples. Something strange is looming over Riverdale - and it's taking the shape of a giant mega-mansion owned by an elusive mogul. Why has he chosen the quaint town of Riverdale, USA as his base of operations? And how is he going to use the teens of Riverdale High to further his political aspirations? Big questions and challenges await the teens and townsfolk. Meanwhile, a new student has graced the halls of Riverdale High and she's turning heads in a big way! Find out all the answers to these important questions in the third issue of the biggest comics sensation of the season! Cover price $3.99. 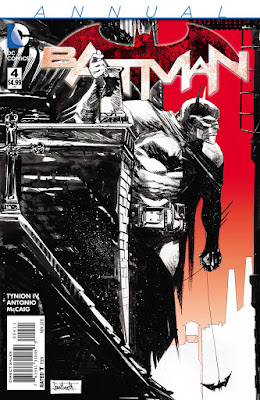 Written by James Tynion IV. Batman is gone… but Bruce Wayne is alive? What does that mean for Gotham City? And who is Bruce Wayne without Batman? This special annual delves deeper into the mystery building, and whether or not Bruce can ever really escape from the shadow of the Dark Knight. Cover price $4.99. 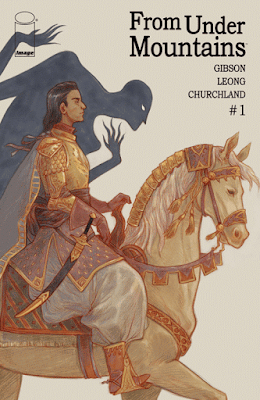 Written by Claire Gibson and Marian Churchland. Art by Sloane Leong. Cover by Marian Churchland. In the first issue of this new fantasy series, old feuds and new monsters rise up to haunt the isolated northern fortress of Karsgate. Cover price $3.99. 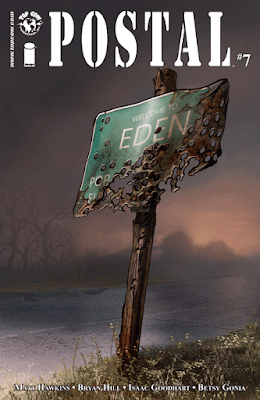 Written by Bryan Edward Hill and Matt Hawkins. Art by Isaac Goodhart. Cover by Linda Sejic. Mark communicates with his father, exploring the darkest parts of his own nature as the Mayor brings a new threat into Eden, a newcomer that has the power to turn the town against itself. Cover price $3.99. 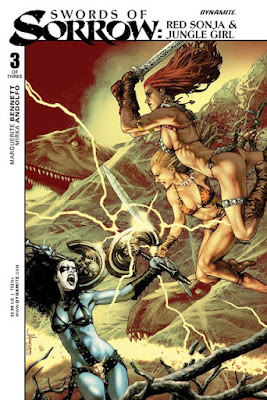 Written by Marguerite Bennett. Art by Mirka Andolfo. Cover by Jay Anacleto. As the ice storm howls and unleashes a crescendo of destruction, Sonja and Jana howl right back. They have better lung stamina. Just you watch. Mistress Hel plays her final endgame, unleashing powers beyond all control for the fate of the island and all its people! Sonja and Jana aren't going to take that lying down, are they? Cover price $3.99. 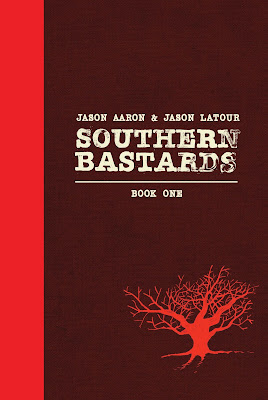 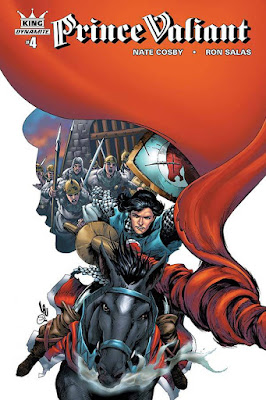 Written by Nathan Cosby. Art by Ron Salas. Cover by Jonathan Lau. The entire universe is in peril. Trillions of lives at stake. There's an omniscient and omnipotent darkness coming. It has never lost a battle. But don't worry…Prince Valiant has a sword… Cover price $3.99. 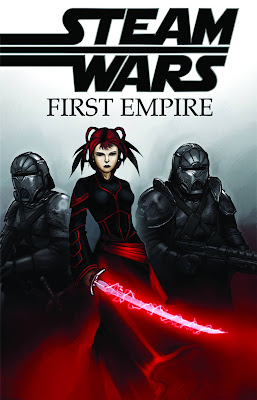 Story and Art by Fred Perry and Brian Denham. Cover by Joe Wright. Not so long ago, in a city not so far away...Fred Perry created an amazing new, steampunked take on a space opera classic with Steam Wars. Now, the ace art pilots of Antarctic Press set out to tell their own tales within this universe. Enjoy a whole new round of Steam Wars stories, and you don't have to win a pod race or employ mind tricks to get it! 32 pages, full color. Cover price $3.99. 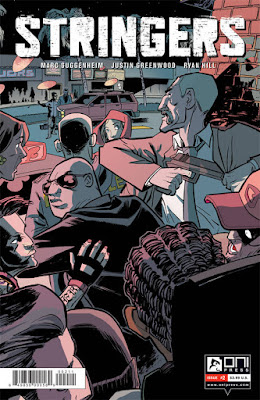 Written by Marc Guggenheim. Art and Cover by Justin Greenwood. Nick and Paul hastily flee a shootout, leaving with their footage and a mysterious USB drive taken off a gang member. They quickly get pulled over by the cops, and Nick suspects something wrong is happening… why are the cops interested in them now, when they've been at countless shootouts before? Paul disagrees, but Nick is the one behind the wheel, which means that a high-speed chase through LAX is going to happen whether Paul likes it or not. Cover price $3.99. 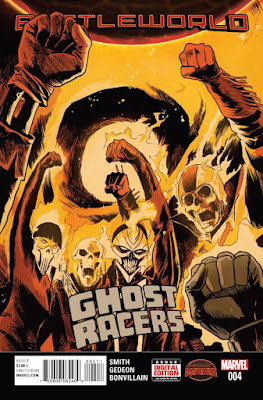 Written by Felipe Smith. Art by Juan Gedeon. Cover by Francesco Francavilla. THE CURSE OF VICTORY! ROBBIE REYES may have broken free of the KILLISEUM races but what at what terrifying cost? What is the fate of the other racers JOHNNY BLAZE, DANNY KETCH, ALEJANDRA BLAZE, SLADE and ZERO COCHRANE after their betrayal to ARCADE? Can anyone truly win on the TRACK OF TREACHERY? Rated T Cover price $3.99. 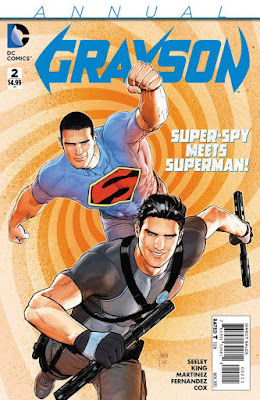 "Just a Guy!" Written by Tom King and Tim Seeley, Cover by Mikel Janin. When Dick comes home to find that the Batman he knew is gone, he seeks out his mentor, Superman. But both friends have changed since they last met. Can they find common ground and team up to stop Blockbuster's plans for Spyral? Cover price $4.99. 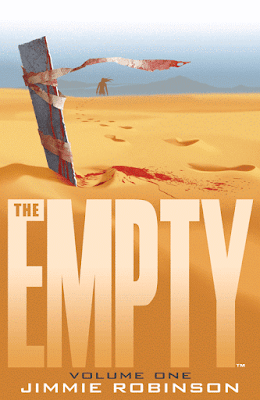 Volume 1 - 1st printing. Collects Empty (2015 Image) #1-6. Story and art by Jimmie Robinson. Tanoor is a hunter struggling to feed her village in an apocalyptic world of poison and decay, but Tanoor finds hope when she discovers a stranger named Lila who has the ability to grow life from death - a power that could change the world of The Empty. Softcover, 152 pages, full color. Cover price $9.99. 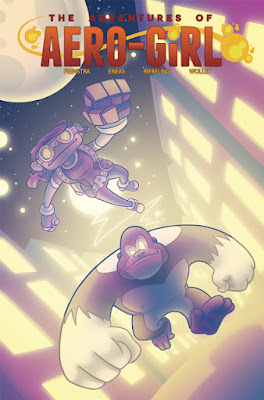 Volume 1 - 1st printing. "First Flight!" Collects Adventures of Aero Girl (2015) #1-4. Written by DeWayne Feenstra. Art and cover by Axur Eneas. As the daughter and the sidekick to Battle Jack, Jacqueline Mackenzie's life couldn't be any better, but tragedy is just around the corner... Will she be ready to protect Foxbay from the likes of Dr. Chimera and his army of AniMen or the Recycler and the junkbots? Will her new super gorilla sidekick be more than she can handle? Will Aero-Girl still be the hero she (and her family) always dreamed she would be? Softcover, 128 pages, full color. All Ages Cover price $14.99. 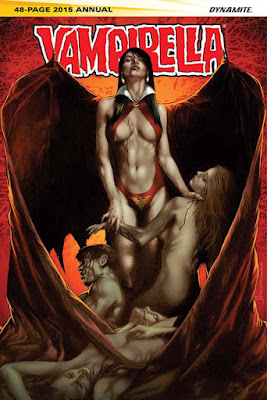 Written by Nancy A. Collins. Art by Aneke. Cover by Jay Anacleto. No longer the Queen of the Nosferatu, Vampirella is free to begin a new chapter in her life-as a field agent for The Kabal, a covert supernatural organization comprised of monsters that polices their own kind in order to maintain balance between humanity and the world of the occult. Her first mission is to rescue a fellow Kabal agent kidnapped by a group of mad scientists calling themselves the Prometheus Society, who demand the release of their fellow member, Dr. Faustus. But first she must coerce a former field agent, Lazarus the Walking Dead Man, into returning to the Kabal before going toe-to-toe with the likes of Dr. Moreau, Dr. Caligari, Dr. John Dee, and a certain Dr. Frankenstein. Let the Monster Rally begin! Cover price $5.99. 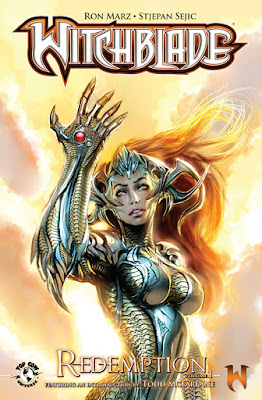 Story By: Ron Marz Art By: Stjepan Sejic Cover By: Stjepan Sejic Published: September 30, 2015 Diamond ID: JUN150561 The seminal run by RON MARZ and STJEPAN SEJIC is available in this value-priced set edition! 640 pages for under $20! 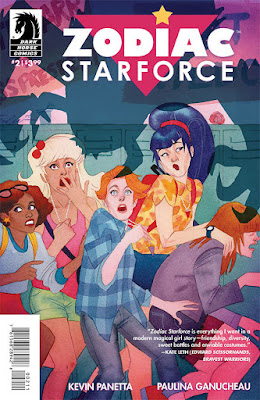 Written by Kevin Panetta. Art by Paulina Ganucheau. Cover by Kevin Wada. They saved the world two years ago, but when a new, monstrous threat arises, can they put aside their differences and become a team again? Hopefully they can; otherwise team leader Emma, who's been infected by an evil magical force, is a goner! Will the Zodiac Starforce reunite and enter the dark realm of Nephos to save their captain, or will a fierce rivalry on the volleyball court tear them apart? Cover price $3.99. 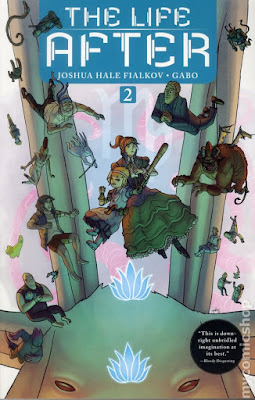 Volume 2 - 1st printing. Collects Life After (2014 Oni) #6-10. Written by Joshua Hale Fialkov. Art and cover by Gabo. No man can conquer Hell and Heaven alone. With the help of his friends Ernest Hemingway, Nettie, and Essie--plus a whole army of kids and an ancient Aztec god--Jude might just stand a chance to change the system of the afterlife. But will the toppling of the current regime simply be replaced by one just as bureaucratic and unfeeling? And what happens when betrayal comes not from above or below, but from one of their own? Softcover, 144 pages, full color. Cover price $19.99. 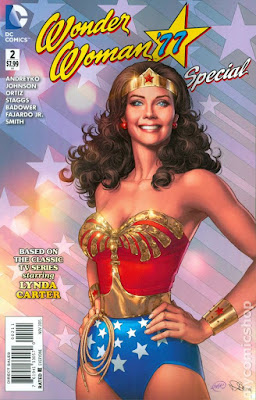 Written by Marc Andreyko. Art by Cat Staggs & Various. Cover by Nicola Scott. Get ready for three new stories based on the classic television series starring Lynda Carter! A scientist who is intensely jealous of Wonder Woman becomes empowered by an ancient artifact and Cheetah is born! A woman with the powers of both fire and ice seeks revenge against a corrupt politician. And, Halloween finds the princess up against an undead adversary. Cover price $7.99.