Sure, there's plenty of great comic books out today. Secret Six #7, Tokyo Ghost #2, Ghost Days #7, Princeless: Raven the Pirate Princess #4, and intriguing debuts, The Shield #1, Cognetic #1. Clean Room #1, Trancers #1 and of course Back to the Future #1 on Back to the Future Day. However, there's a stunning line-up of trade paperbacks and collections. Memetic, Alias, Brides of Helheim, and Hawkeye are incredible reads and would make nice gifts. Just saying. Enjoy this week's notable new releases and rocking slideshow. 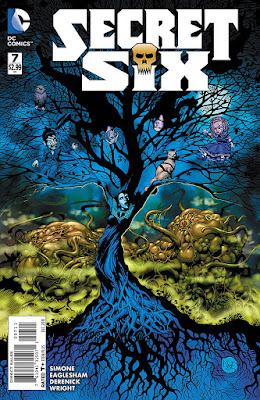 Written by Gail Simone. Art and Cover by Dale Eaglesham. A new epic begins, and a major turning point in the life of Black Alice gets underway! With the world drained of all its arcane energies, the great mages of the DC Universe gather to learn who-or what-is responsible. The answer points to the Secret Six's most powerful member, and it's going to drag the team into unfamiliar territory: the realm of magic. Cover price $2.99. 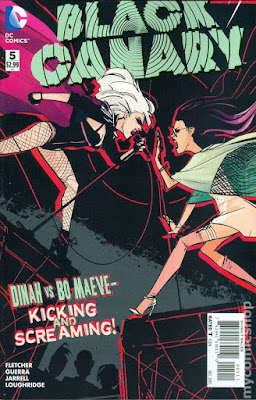 Written by Brendan Fletcher. Art by Pia Guerra. Cover by Annie Wu. The secrets of Ditto's bizarre abilities come to light - and Dinah and her newfound nemesis Bo Maeve come face to face! It's not gonna be pretty… Cover price $2.99. 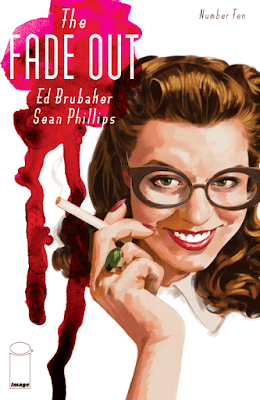 Written by Ed Brubaker. Art and Cover by Sean Phillips and Elizabeth Breitweiser. Another secret about the murder comes to light! Cover price $3.50. 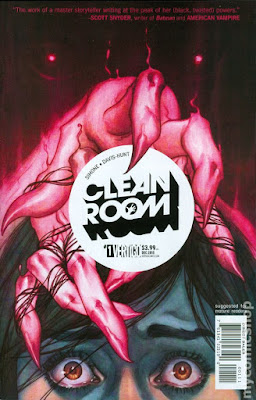 Written by Gail Simone. Art by Jon Davis-Hunt. Cover by Jenny Frison. Astrid Mueller is the enigmatic and compelling guru of a giant self-help organization-a devastatingly powerful figure in the industry between psychology and religion. Journalist Chloe Pierce's fiancé decided to pick up Astrid's book, and within three months he was dead. Something in Astrid Mueller's book made Philip blow his brains out all over Chloe's new kitchen. Now Chloe is on a mission to find out who Astrid Mueller really is. What is this Clean Room she's been hearing about where your deepest fear and worst moments are revealed? Chloe intends to immerse herself in the Clean Room and wreak havoc on Astrid's empire. Cover price $3.99. 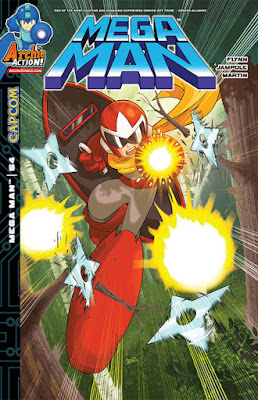 Written by Ian Flynn. Art by Ryan Jampole & Various. Cover by Patrick Spaz Spaziante. Mega Man's long lost brother returns in 'Red Shift': Break Man answers the call of a ghost! How is it possible that Dr. Wily is still alive? And what haunting secret will he use to keep Break Man under his control? It's up to Blues to do some soul-searching! Will he remain broken, or will he finally become a hero like his brother? Cover price $3.99. 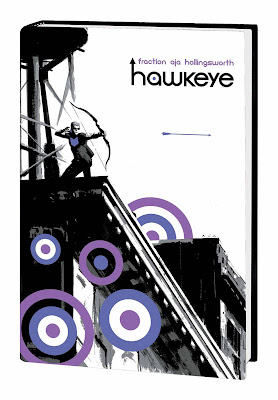 1st printing. Collects Hawkeye (2012 4th Series) #1-22 and ANNUAL #1, and Young Avengers Presents (2008) #6. Written by Matt Fraction. Art and cover by David Aja. Marvel's most critically acclaimed comic in recent memory! Clint Barton, breakout star of a little Marvel movie you might have seen a while back, continues his fight for justice - and good rooftop BBQs! With Young Avenger Kate Bishop by his side, he's out to get some downtime from being one of Earth's Mightiest Heroes - but when the apartment building he's moved into, and the neighbors he's befriended, are threatened by a tracksuit-wearing, dog-abusing gang of Eastern European mobsters who say "bro" an awful lot, Clint must stand up and defend his new adopted family...any way he can. It's Hawkguy, Kate, Pizza Dog et al. against the Clown, Madame Masque, the tracksuits and more in a fantastic, Eisner Award-nominated reinvention of the arrowed Avenger! Bro, you read this book. Okay, bro? Hardcover, 8 1/2-in. x 11-in., 552 pages, full color. Cover price $99.99. 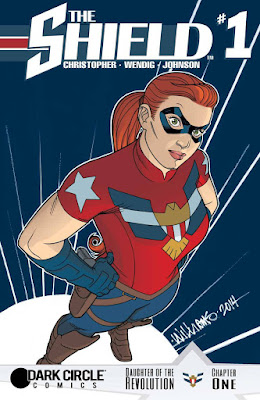 Written by Adam Christopher and Chuck Wendig. Art and Cover by David Williams and Gary Martin. 'Daughter of the Revolution,' Part 1. Since the dawn of the republic, whenever her country faces its blackest days, she returns: a spirit of the revolution sent to fight for what is right. But when she reappears for the first time in a generation with no memories - not even of her own identity - and encounters an evil force expecting her arrival, all the Shield can do is run! Cover price $3.99. 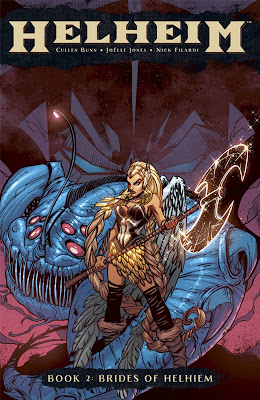 Volume 2 - 1st printing. "Brides of Helheim!" Written by Cullen Bunn. Art and cover by Joëlle Jones. Years have passed since Rikar's victory over Bera and Groa. In defeating the witches, Rikard saved his people. And yet he cannot resist - he is still denied the promise of Valhalla. The warrior is condemned to wander the living world as an undead draugr. Now, new challenges lie before Rikard, as the draugr is sent to claim a Blood Debt from the mad warlock who taught the witches their dark arts. Softcover, 152 pages, full color. Cover price $19.99. 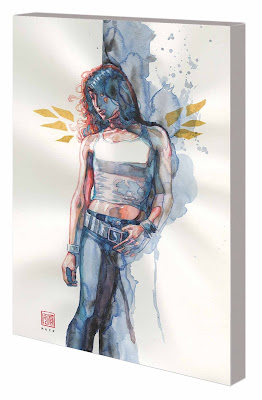 Volume 2 - 1st printing. "Alias!" Collects Alias (2001-2004 Marvel) #11-15. Written by Brian Michael Bendis. Art by Michael Gaydos and Bill Sienkiewicz. Cover by David Mack. All she ever wanted was to be a super hero. But life had other plans for Jessica Jones. Now, the adventures of the would-be Avenger turned bitter super-powered private eye continue with two new cases. First, Jessica travels to upstate New York to investigate the disappearance of a teenage girl rumored to be a mutant in a prejudiced small town - but a murder mystery and a drunken, ill-advised fling complicate matters. Then, the hard-luck PI goes on a date with...the Astonishing Ant-Man?! Softcover, 128 pages, full color. Mature Readers Cover price $19.99. 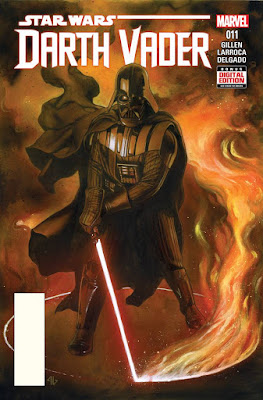 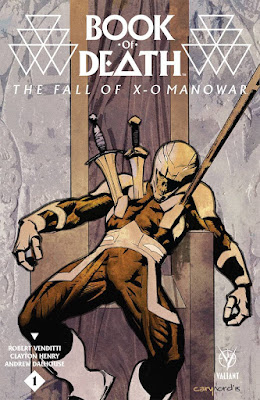 Written by Robert Venditti. Art by Clayton Henry. Cover by Cary Nord. The Book of the Geomancer foretells of a deadly future for the Valiant Universe… but what if the future holds hope for one powerful hero? After hundreds of years in exile on an alien planet, Aric of Dacia has returned to an unfamiliar Earth, only to find a planet that doesn't remember… or want him. Will Aric of Dacia finally find happiness in the aftermath of the apocalypse? Cover price $3.99. 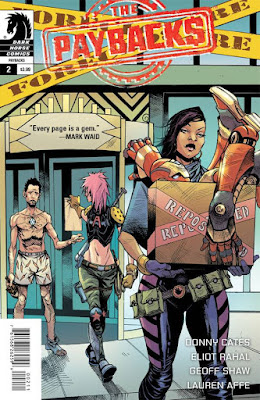 Written by Donny Cates and Eliot Rahal. Art and Cover by Geoff Shaw. When the world's greatest superhero team, the Command, defaults on their loans, their secret underwater base becomes the property of the Paybacks! It's Night Knight's first mission with the superhero repo squad, and the foreclosure goes smoothly . . . until it really, really doesn't. I mean, High Guard can see through walls, you know? How do you sneak past that? Cover price $3.99. 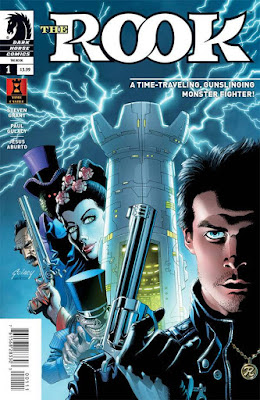 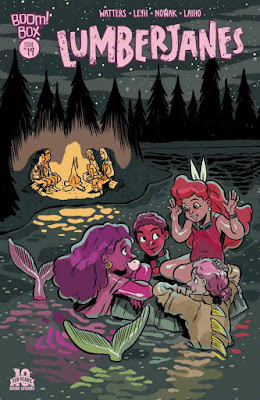 Written by Shannon Watters and Kat Leyh. Art and Cover by Carolyn Nowak. April does her best to repair the mermaids' friendship, but she just keeps making things worse! Cover price $3.99. 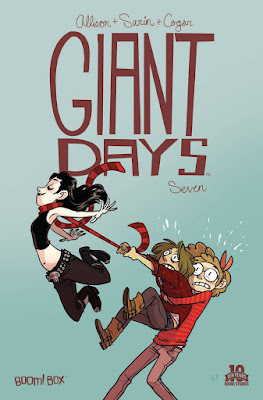 Written by John Allison. Art and Cover by Lissa Treiman. It's time for end-of-semester exams, but Esther was 'too busy living' to attend most of her lectures and it's up to Daisy and Susan to help her prepare. Meanwhile, Susan goes through the schmoopy romantic phase of a new relationship. Cover price $3.99. 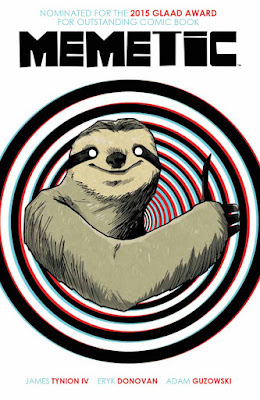 1st printing. Collects Memetic (2014 Boom) #1-3. Written by James Tynion IV. Art and cover by Eryk Donovan. What's to Love: Memetic is truly an event comic, and a wholly unique take on the disaster genre. Much like his work on The Woods, writer James Tynion IV-with the help of fantastic newcomer Eryk Donovan (The House in the Wall)-brings horror to a whole new generation of fans of J-horror films like Uzumaki and The Ring. Plus, Memetic was nominated for the 2015 GLAAD Award for Outstanding Comic! What It Is: A meme is an idea that starts with an individual, and then virally spreads to multiple persons and potentially entire societies. Richard Dawkins suggests a meme's success comes from its effectiveness to the host. But history shows that destructive memes can spread just as rapidly through society. Memetic shows the progression of a weaponized meme that leads to the utter annihilation of the human race within 72 hours. The root of this apocalypse is a single image on the internet, a "meme" in the popular sense. A meme that changes everything. Softcover, 128 pages, full color. Cover price $14.99. 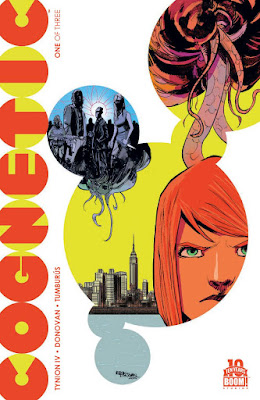 Written by James Tynion IV. Art and Cover by Eryk Donovan. Every human believes that they are self-reliant, self-determined individuals, each set on their own course. They've built civilizations, they've built culture, they've built lives... But what if that isn't the right track? What if there is a singular mind ready to take back control and finally right the destiny of mankind and build a better tomorrow? Cognetic is the story of a powerful psychic being that once controlled one-third of the world's population as a part of its hivemind, and his return to humanity in modern-day New York City. It's a psychic action thriller, precariously positioned on the edge of outright apocalypse. It's also the story of a young woman, the assistant to the director of the FBI, who might be the only one who can save humanity, but at a terrible, terrible cost. Each issue in this miniseries is oversized with 48 pages! Cover price $4.99. 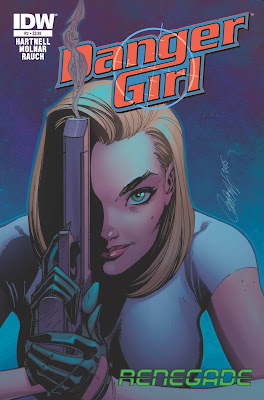 Written by Andy Hartnell. Art by Stephen Molnar. Cover by J. Scott Campbell. More details emerge from Abbey Chase's past as a 16-year-old in Tokyo… learning martial arts and foreign languages from a female member of the secret police. Then, in present-day Brazil, Abbey continues the search for her long-missing father… and for a valuable gem! Cover price $3.99. 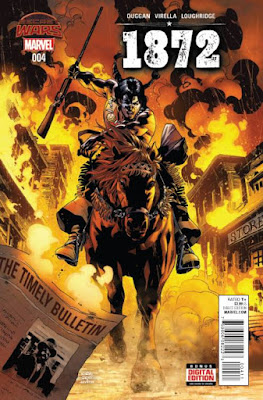 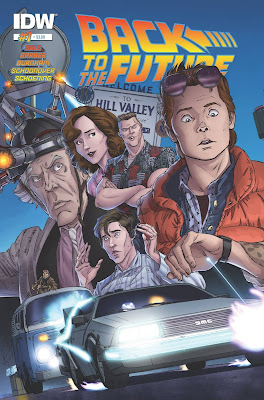 Written by Bob Gale & Various. Art by Brent Schoonover and Dan Schoening. Cover by Dan Schoening. 'Untold Tales and Alternate Timelines,' part 1: BttF creator/screenwriter Bob Gale returns with all-new tales from the twisting and turning timeline that made Back to the Future a, well… TIMELESS pop-culture phenomenon! Take a trip back to 1985 and be there when Doc Brown and Marty McFly first meet, and then jump even farther back, to 1945, to witness Doc's involvement in the super-secret Manhattan Project. Cover price $3.99. 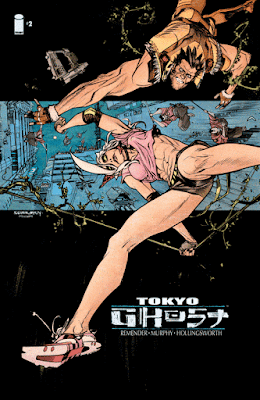 Written by Rick Remender. Art by Sean Murphy and Matt Hollingsworth. Cover by Sean Murphy. Constables Led Dent and Debbie Decay are given their final mission: purge their bodies of all technology and invade the Garden Nation of Tokyo. Cover price $3.99. 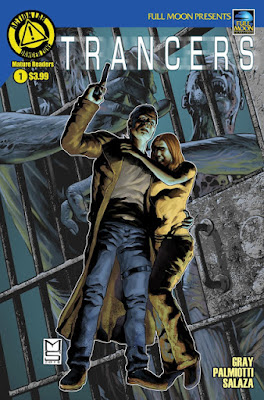 Written by Justin Gray and Jimmy Palmiotti. Art by Marcelo Salaza and Marcio Freire. Cover by Marcelo Salaza. Based on the cult film, Trancers is the story of decorated Police Trooper Jack Deth who has travelled from the year 2247 to 1985 Los Angles on a one-way mission to capture a fugitive with the power to transform ordinary people into psychotic killing machines. Cover price $3.99. 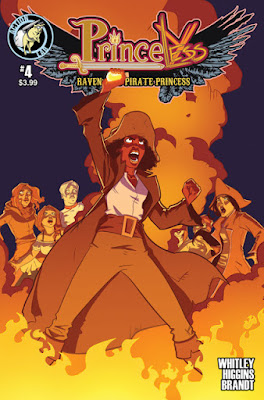 Written by Jeremy Whitley. Art and Cover by Rosy Higgins and Ted Brandt. Raven finally has a crew and is ready for cast off when an old friend and his rambunctious daughter come under threat from the town guard. There's too many to fight and they're too heavily armed. How will Raven and her crew save one of the only allies they have? Cover price $3.99. 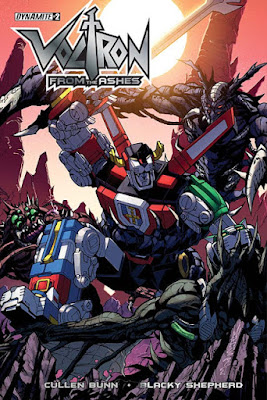 Written by Cullen Bunn. Art by Blacky Shepherd. Cover by Alex Milne. The mighty Voltron fell in battle more than 200 years ago. Now, a new threat has surfaced and Voltron is needed once more. But a new team must be chosen to pilot the lions. Cover price $3.99.