Another comic book day, another eclectic mix to fit anyone's taste. From all-ages: Princeless, Vol. #4: Be Yourself, Cyrus Perkins and the Haunted Taxi Cab #1, Sonic Universe #81, Power Up #4 and more. To more mature stuff: Revival #34, Grayson #13, Shaft: A Complicated Man TPB, The Black Hood #6 and many more.  Whatever your taste we got you covered.


In the spirit of Halloween, this week's comic book slideshow features the music from 'Silence of the Lambs' with accompanying video clips of one the freakiest scenes. Enjoy! 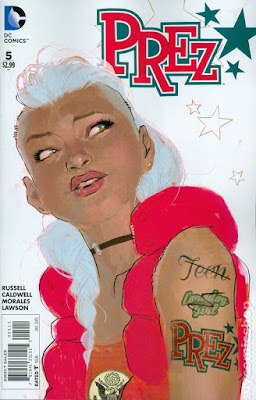 Written by Mark Russell. Art and Cover by Ben Caldwell. President Ross extricates herself from a civil war via the creative use of kitchen appliances! Meanwhile, a self-aware killer robot goes to church, and a couple of hippies escape Boss Smiley's gerbil cage. 32 pages, full color. Rated T Cover price $2.99. 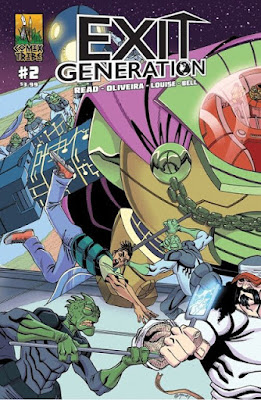 Written by Sam Read. Art by Caio Oliveira. Cover by Ramon Villalobos. To rescue their loved ones from the insatiable Ruleians, Jack and Mo seek the aid of a pair of antisocial outcasts, and get way more than they bargained for. Meanwhile, the humans trapped in orbit by their hungry extraterrestrial kidnappers find an unlikely ally! 20 pages, full color. Cover price $3.99. 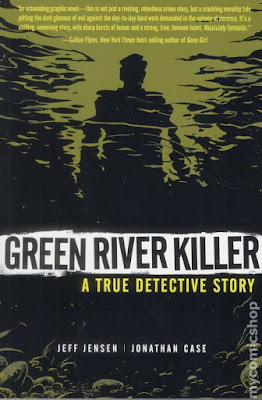 1st printing. Written by Jeff Jensen. Art and cover by Jonathan Case. Throughout the 1980s, the highest priority of Seattle-area police was the apprehension of the Green River Killer, the man responsible for the murders of dozens of women. In 1990, with the body count numbering at least forty-eight, the case was put in the hands of a single detective, Tom Jensen. After twenty years, when the killer was finally captured with the help of DNA technology, Jensen spent 180 days interviewing Gary Leon Ridgway in an effort to learn his most closely held secrets-an epic confrontation with evil that proved as disturbing and surreal as can be imagined. Softcover, 6-in. x 9-in., 240 pages, B&W. Cover price $19.99. 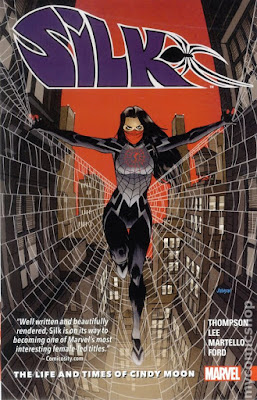 Volume 00 - 1st printing. "The Life and Times of Cindy Moon!" Collects Silk (2015 Marvel) #1-7. Written by Robbie Thompson. Art by Stacey Lee. Cover by Dave Johnson. Cindy Moon exploded into the Marvel Universe when we learned she was bitten by the same radioactive spider that empowered Spider-Man! She then went on to save Peter Parker's life (more than once!) and traverse the Spider-Verse. Now, as Silk, Cindy is on her own in New York City, searching for her past, defining her own future, and webbing up wrongdoers along the way! But she's about to cross the Black Cat's path, and that's not good news for her! Silk has been picking at the edges of Black Cat's operation, and Felicia Hardy has had about enough. Felicia gets the drop on Cindy, and Silk hits rock bottom. Can even a team-up with Spider-Man save the day? Plus: a date with Johnny Storm! Secrets of Silk's past revealed! Will Cindy Moon ever find her family? Softcover, 160 pages, full color. Cover price $19.99. 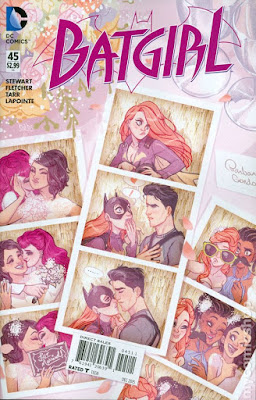 Written by Cameron Stewart and Brendan Fletcher. Art and Cover by Babs Tarr. As Barbara's friends gather for a major celebration, a familiar face from her past returns…and he's got a lot to say about their future together! Cover price $2.99. 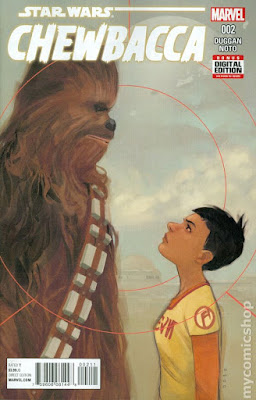 Written by Gerry Duggan. Art and Cover by Phil Noto. Known as the skilled co-pilot of the infamous Millennium Falcon, the legendary Wookiee warrior CHEWBACCA will star in his very own limited comic series! After the battle of Yavin, Chewbacca is on his own when he crash lands his ship on an Imperial occupied planet. Now stranded, Chewie finds himself caught in the middle of trying to return to the rebellion and helping a young and feisty girl in need. Rated T Cover price $3.99. 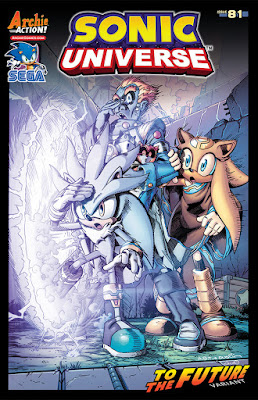 Written by Evan Stanley. Art by Jim Amash & Various. Cover by Tracy Yardley and Matt Herms. Silver fights for his future in 'The Silver Age,' Part 3. Silver is at the mercy of the heartless council, but their cold nature is nothing compared to the evil then unleash! Gold's mysterious past is now revealed, as well as how it's tied to the current calamity. Will it be up to Silver to save his future once again? Cover price $3.99. 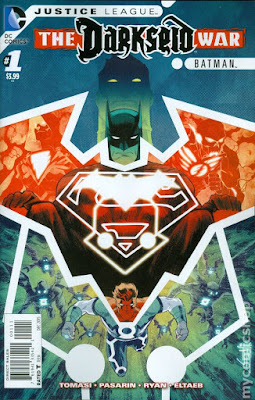 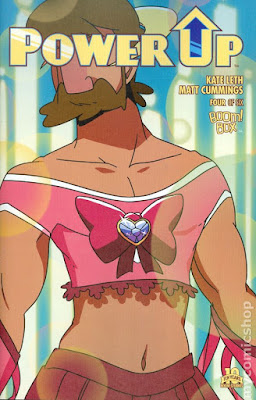 Written by Kate Leth. Art and Cover by Matt Cummings. When Kevin has to face a brutal baddie on his own, he learns an important lesson about self-perception and true strength! 28 pages, full color. Cover price $3.99. 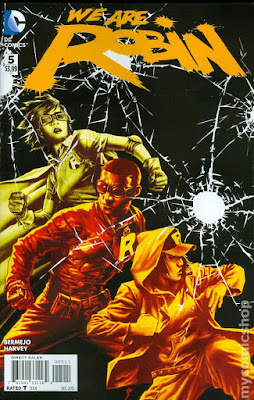 Written by Lee Bermejo. Art by Khary Randolph. Cover by Lee Bermejo. Some of the Robins are ready to return to the streets, but others aren't putting the 'R' back on until they knows who's pulling the strings behind The Nest. Meanwhile, a new player takes interest in the Robins. Will they all be united or pulled apart forever? Cover price $3.99. 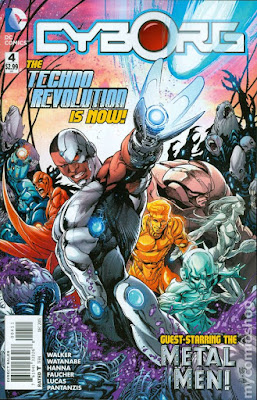 Written by David Walker. Art by Ivan Reis and Felipe Watanabe. Cover by Ivan Reis and Joe Prado. The secret of the Tekbreakers is revealed as Cyborg forms a shaky alliance with the enemy that once killed him! But what choice does he have if he's going to stop the cybernetic terror of the Technosapiens? 32 pages, full color. Rated T Cover price $2.99. 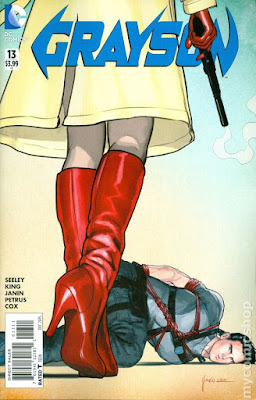 Written by Tim Seeley and Tom King. Art and Cover by Mikel Janin. Back on the job at Spyral, Dick now has a mission all his own: find out more about Agent Zero. What could this mysterious shadow leader want with Agent 37? 32 pages, full color. Rated T Cover price $3.99. 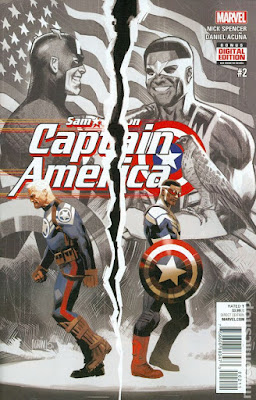 Written by Nick Spencer. Art and Cover by Daniel Acuña. When Steve Rogers was restored to his natural age, he chose one of his closest and most trusted allies to take up his shield. Now Sam Wilson, formerly the Avenger known as Falcon, carries on the fight for liberty and justice as the all-new, all-different Captain America! Rated T Cover price $3.99. 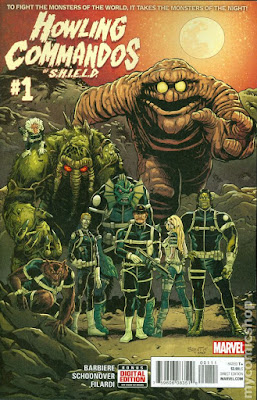 Written by Frank Barbiere. Art and Cover by Brent Schoonover. Hidden deep beneath AREA 13 lies the clandestine headquarters of S.T.A.K.E.--a top secret division of S.H.I.E.L.D. housing aliens, mythical beasts, and all manner of extra-normal entities. Under the command of legendary soldier DUM DUM DUGAN, these monsters step out of the shadows and defend the world against supernatural threats too dangerous for normal men as THE ALL-NEW, ALL-DIFFERENT HOWLING COMMANDOS OF S.H.I.E.L.D.! 28 pages, full color. Rated T+ Cover price $3.99. 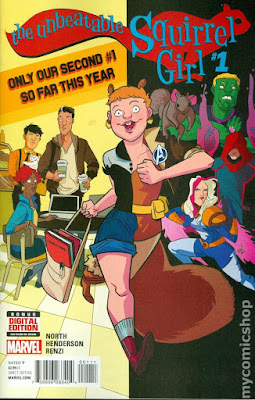 Written by Ryan North. Art and Cover by Erica Henderson. Galactus. Thanos. M.O.D.O.K. With her unique combination of wit, empathy, and totally kick-butt squirrel powers, Doreen Green -- aka The Unbeatable Squirrel Girl -- has taken ALL these chumps down! Alongside her friends Tippy-Toe (a squirrel) and Nancy (a regular human with no powers whatsoever -- they checked), Squirrel Girl is all that stands between the Earth and total destruction! Sometimes. Other times there's no threats and she's just a regular computer science student. That's an adventure too though! Rated T Cover price $3.99. 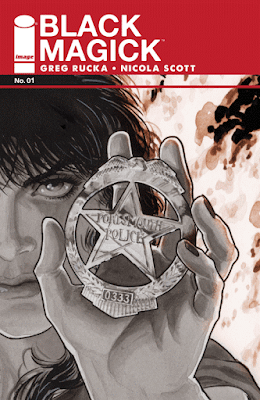 Written by Greg Rucka. Art and Cover by Nicola Scott. The hammer falls this Halloween! Detective Rowan Black works robbery/homicide for the Portsmouth PD, but her greatest mystery is the truth about herself…both who she has been, and who she will become. Yet there are others in Rowan's world with very long memories, and the power that one person holds, another will always covet. PLUS, each issue also features an all-new work of original fiction by GREG RUCKA! A new gothic-noir ongoing series about legacy, destiny, redemption…and the price of magic. Cover price $3.99. 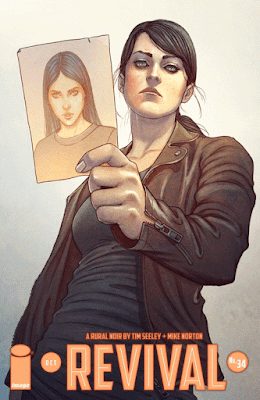 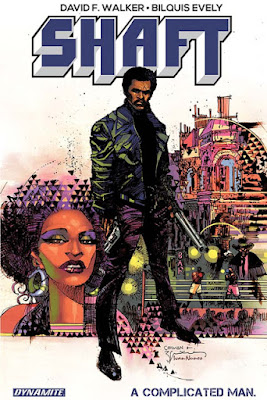 1st printing. Collects Shaft (2014 Dynamite) #1-6. Written by David Walker. Art by Bilquis Evely. Cover by Denys Cowan and Bill Sienkiewicz. Who's the black private dick that's a sex machine with all the chicks? Shaft! (You're damn right!) Created by author Ernest Tidyman and made famous in a series of novels and films, iconic hero Shaft makes his graphic novel debut in an all-new adventure. He's gone toe-to-toe with organized crime bosses, stood up to the cops, squared off against kidnappers, and foiled assassination attempts. But who was John Shaft before he became the hardboiled investigator with a reputation as big as New York City itself? Recently arriving home from his tour of duty in Vietnam, his first case - tracking down a missing person for his girlfriend - quickly turns into a matter of life and death, making him a target of gangsters and the police! Softcover, 176 pages, full color. Cover price $19.95. 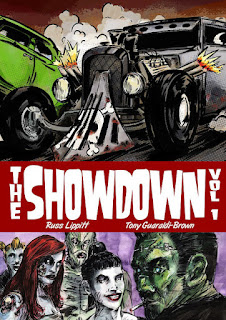 Created and written by novelist, Russ Lippitt (Lion’s Share) and illustrated by Tony Guaraldi-Brown (The Final Plague). As legend has it, monsters such as Vampires, Werewolves, and Zombies once roamed the face of the earth but were banished to Hell for their unspeakable acts on humanity. Now in the depths of Dante’s vision of Hell, Satan holds a race once a millennium, a race unknown to man called The Showdown. Creatures from all walks of existence challenge one another in this death race exhibition of fantastic horror and campy grindhouse 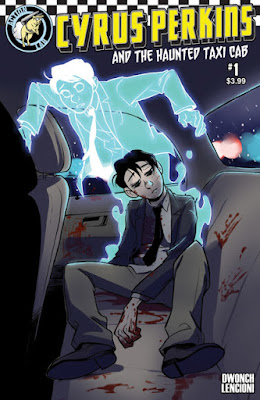 Written by Dave Dwonch. Art and Cover by Anna Lencioni. After a young boy dies in his taxi cab, Cyrus Perkins must solve the boy's murder... or be haunted by the spirit trapped in his car! Double Jumpers creator and co-writer of the hit all-ages series Vamplets teams with rising star Anna Lencioni to deliver a supernatural crime noir with a hero like no other: Cyrus Perkins! 28 pages, full color. Cover price $3.99. 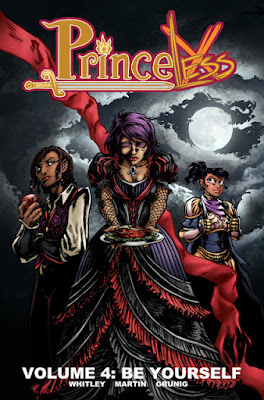 Volume 4 - 1st printing. "Be Yourself!" Collects Princeless: Be Yourself (2015) #1-4. Written by Jeremy Whitley. Art and cover by Emily Martin and Brett Grunig. Angoisse Ashe, the oft-forgotten middle sister of the Ashe royal family, is locked in a castle deep in the swamp. Not only is her castle guarded by zombies, but the swamp is full of dangerous hazards. Everything from quicksand to goblins to swamp monsters to...VAMPIRES! But does that give Adrienne pause? Unfortunately not, as she and Bedelia dive head-first into their most dangerous adventure yet! Be sure to pick up this collection and share every moment of this thrilling chapter of the Princeless saga! Softcover, 7 1/2-in. x 10-in., 128 pages, full color. Cover price $14.95. 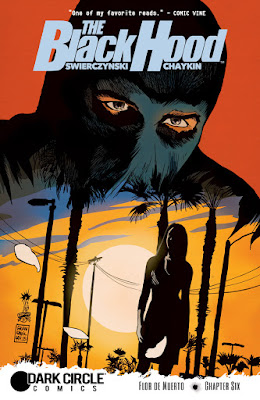 Written by Duane Swierczynski. Art by Howard Chaykin and Jesus Aburtov. Cover by Francesco Francavilla. 'Flor de Muerto.' After the soul-crushing events of 'Bullet's Kiss,' disfigured cop Greg Hettinger leaves Philly and checks into a Southern California rehab clinic. But a plane ride can't separate Greg from his troubles. A fellow patient believes her former drug dealer (and lover) has sent someone to kill her, and it's up to Greg to figure out which member of their circle is preparing to pull the trigger. New to the dark, twisted world of The Black Hood? Then check yourself in for this thrilling one-shot from novelist Duane Swierczynski and superstar artist Howard Chaykin. Cover price $3.99.