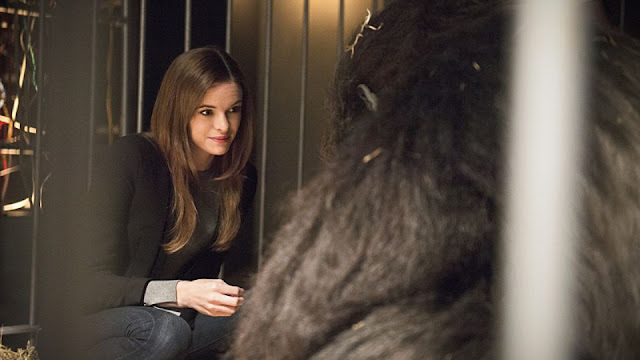 Gorilla Grodd made his return to The Flash and he was as impressive as ever. The effects crew should garner some more awards nominations as Grodd's role in 'Gorilla Warfare' was more vital this time around as he played beast to Caitlin's beauty.


In a season full of fan-friendly easter eggs and Earth-2 look-ins, having Grodd back after such an electrifying episode last week with Zoom's devasting annilation of Barry almost seemed like too much good stuff. Grodd became more of a sympathetic figure, a lonely highly-intelligent telepathic primate with a lust for brain-enhancing serum who just wants Caitlin to produce ape friends like him. His presence also serves as motivation to get Barry out of his one-man pity party after getting his butt kicked in front of Central City.

Iris enlists Henry Allen's help and pulls him from his exciting fishing trip. Still an odd turn of events having Henry gone fishin' after getting out of jail after 15 years. You'd think he'd want to be with his son but that aside it's nice having John Wesley Shipp's reassuring presence and heartwarming chemistry with Grant Gustin back on the show. Henry, as all of Barry's father figures on 'The Flash' do, builds Barry's confidence to overcome his pouty face and regain his strength to take on Grodd.

After the fiasco of luring Zoom to Earth-1 backfired in Harrison Wells' face, he was ready to hightail it back to Earth-2 to take on Zoom on his own. Even though Cisco was more than happy to see him go, Caitlin convinced him that he needed to stay and help find a way to defeat Zoom together. Tom Cavanagh has been putting on an acting clinic. The more dickish Wells of the other Earth was a desperate man trying to use Barry to defeat Zoom to get his daughter back. Cavanagh found the nuances between the two Wells and created another character. Less cerebral with a short fuse, Wells-2 or Harry as he's called, felt defeated and humbled but willing to help get Caitlin back from the clutches of Grodd. He's starting to find his place at STAR Labs.

As you might have expected, Barry regains his confidence and strength and is able to use his super punch to push the big hairy guy into a portal that Harry claims will land Grodd in a sanctuary. The sight of Gorilla City is one of those special gifts to fans that producers and writers want as much as the viewers. Again the special effects are so advanced for a television budget that they defy expectations.

In other shenanigans, Cisco blows his date with Kendra Saunders (Ciara Renee) after a touch sparks a vision of a winged figure. He later realizes it's her who has the wings during a make-up date. It's more 'Legends of Tomorrow' origin building that feels clunky but Carlos Valdes and Renee are irresitably charming nonetheless.

What isn't so charming is Barry's lying and ridiculous excuse-making to Patty Spivot. It seems awfully familiar when he was doing it to Iris and we know how well that went. At this point so many people know his secret what is one more person. Especially, someone as efferfescent and understanding as Patty who makes a great ally. I mean you broke your back and you're keeping Patty at bay because you tell her you have an infectious flu? Come on, son.

Despite Barry's predictable story arc, having Grodd back even in a benign role made the episode occassionaly jaw-dropping. Cavanagh's performance as Harry pretending to be Wells-1 pretending to be Reverse Flash was as dynamic an acting job as you'll see on TV.

And soon all this required character-building for 'Legends' will be over but first the 'Arrow-The Flash' crossover event is headed our way after Thanksgiving. Here's a preview of the 2-part 2-night event with episodes entitled 'Legends of Today' and 'Legends of Yesterday.'


In its second major crossover event with “Arrow,” Vandal Savage (guest star Casper Crump) arrives in Central City and sets his sights on Kendra Saunders (guest star Ciara Renée). After Vandal attacks Kendra and Cisco, they turn to Barry for help. Realizing how dangerous Vandal is, Barry takes Kendra to Star City and asks Oliver and team to hide her until he can figure out how to stop Vandal. However, things quickly go from bad to worse when a man with wings AKA Hawkman (guest star Falk Hentschel) shows up and flies off with Kendra. Meanwhile, Harrison develops a serum to make Barry run faster and asks Jay (guest star Teddy Sears) to test it out

Oliver and Barry Allen take Kendra Saunders and Carter Hall to a remote location to keep them hidden from Vandal Savage while they figure out how to defeat him. Malcolm arranges a meeting between Vandal, Green Arrow and The Flash that doesn’t go as planned. Meanwhile, Felicity, Thea, Diggle and Laurel work with Team Flash to come up with a weapon powerful enough to destroy Vandal Savage.