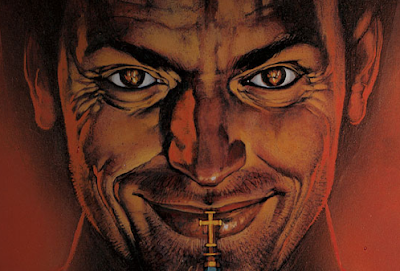 A supernatural Preacher, a gun-toting ex, and an Irish vampire are coming to AMC mid-2016. Watch the World Premiere trailer. For more Preacher: http://www.amc.com/preacher

Cooper plays Jesse Custer, a small-town Texas minister who's lost his faith but becomes possessed by a hybrid angel/demon and imbued with the "word of God," the ability to command others. Accompanied by vampire drunk Cassidy (Joseph Gilgun) and gunslinging ex-girlfriend Tulip O'Hare (Ruth Negga), they're hot on the trail of God who's left Heaven and Custer wants answers.

'Preacher' has been in development in some form or another for almost twenty years with different people attached, but it took producers Seth Rogen, Evan Goldberg and Sam Caitlin to make it a reality. However, the comic was probably more R-rated for even a network like AMC so we'll see how it's handled when the show debuts in mid-2016.
Email Post
Labels: AMC DC Comics Dominic Cooper Preacher Seth Rogen Television Vertigo