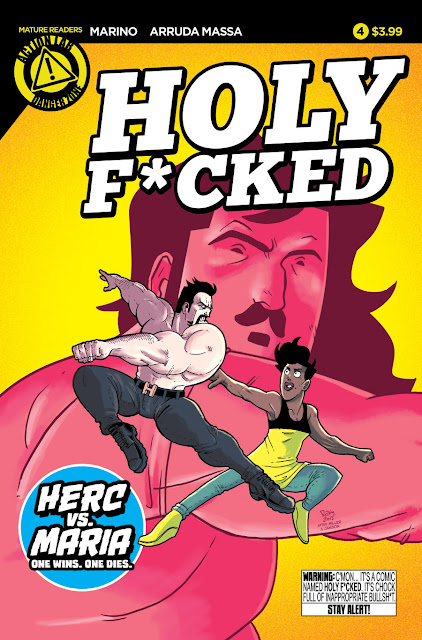 BECAUSE YOU DEMANDED IT: a legendary Greek demigod battles a pissed off Argentinian nun! (Okay, maybe you didn't actually demand it...).  Maria fights her former lover as the fate of Jesus hangs in the balance. Can she dispatch Hercules as easily as his daddy, Zeus?  Plus--what surprise does Satan have waiting at the hospital?

I had the pleasure of interviewing the creators behind 'Holy F*ked,' Nick Marino and Daniel Arruda Massa, via email about the success of their series and the creative process behind it. The last issue of the miniseries arrives this Wednesday completing the second arc of their satirical and hilarious comedy featuring Jesus, Satan, and the vengeful Hercules.

This is your second run of Holy F*cked. It’s a fun and creative book that flirts with controversy but really is a slice-of-life story, albeit with some supernatural shenanigans, that just happens to feature Jesus and Satan in a romantic, domesticated, relationship. Considering the premise, are you surprised the book has made it this far?

DANIEL: When I drew Holy F*ck, I never expected to ever draw a second story arc. To be honest, I was a little surprised to find that someone wanted to publish a comic drawn by some kid. I did (and still do) really believe in Nick's writing, though. So when we got the numbers back for Holy F*ck #1, we were happily surprised and jumped right into F*cked.

NICK: Like Daniel said, I never expected to do a follow up to Holy F*ck! It's been super cool to have the opportunity to do another four issues featuring these unorthodox characters. And while I didn't really think we'd get the chance to do a sequel, it makes a lot of sense in retrospect. Daniel did an amazing job designing the visual identity of Holy F*ck and I like to think that made Holy F*cked a relatively easy decision for Action Lab.

With that said, our first miniseries was a globehopping action movie parody while this second miniseries has been a much smaller story focused on family and interpersonal relationships with a smidge of superheroics in the mix. As far as I'm concerned, the premise has shifted quite a bit over time. 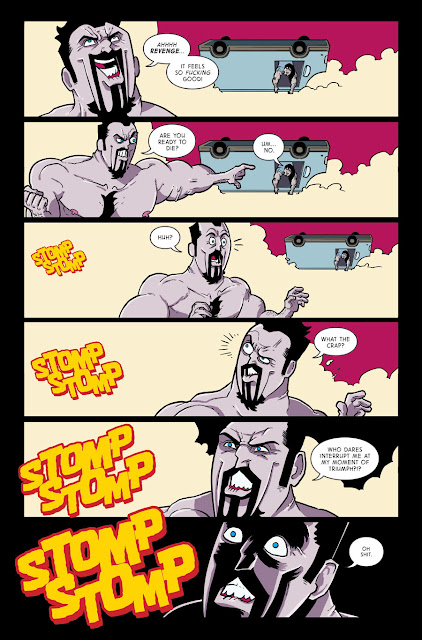 DANIEL: Just the excitement on people's faces when they talk about it has been awesome. I know how excited I can get about someone else's work, but I never expected to get the same reaction.

NICK: I love the way people act when they flip to the Jesus shower scene in Holy F*cked #1. I've also been thrilled to see reviewers call Holy F*cked "sweet" or "good natured" despite all of the ridiculous sexual and scatological humor we crammed in there. 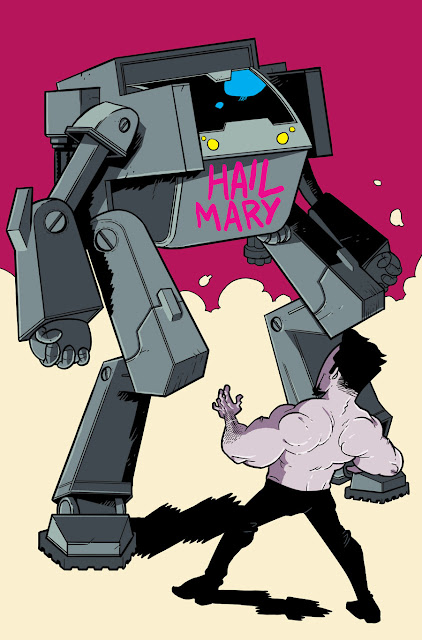 What’s been the worst reaction to your series?

NICK: I think the worst is when there's no reaction at all! I'd rather read a mix of positive and negative reviews than get no reviews.

DANIEL: I feel the same way.

Just how much hatemail do you receive? 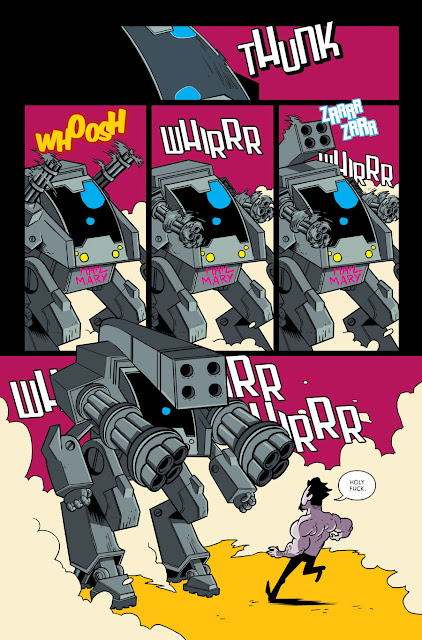 How has the story or characters evolved since the idea was born?

DANIEL: I think Nick can say more about this since he had the story idea a long time before I joined him. That said. I think Satan changed a lot in the beginning. At first, he was gonna be a 50 Cent type of guy and about as muscled up as JC, but that just didn't feel right to me. So I decided to make him the opposite.

NICK: It's tough for me to remember exactly how things were in the beginning. My original plot idea for a story called The Bible 2 back in 2010 was fairly similar to how Holy F*ck turned out, but not nearly as unique or weird.

Daniel and I began collaborating in the spring of 2013 and we rebuilt the concept of The Bible 2 together. He contributed so many incredible ideas that made the characters more compelling. Most notably, he was the one who suggested the romance between Jesus and Satan.

When we dove into the sequel about a year ago, he really pushed for Hercules as the antagonist. I had some other concept in mind where Jesus fights a sexual slavery operation which leads directly to the Pope. Satan and Maria just made cameo appearances in that plot. But once I embraced the potential of Hercules, we ended up with the sentimental tale we have now. 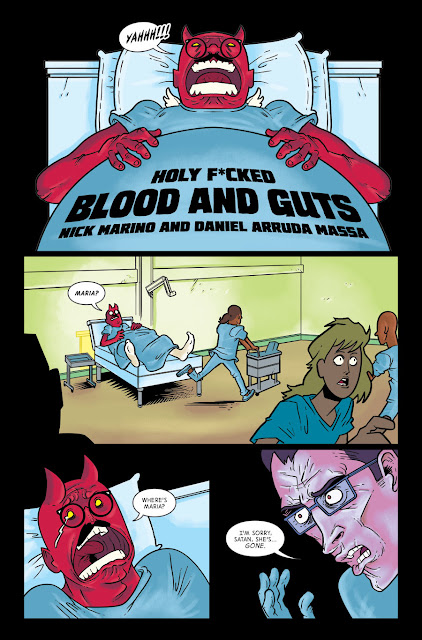 Did you have to alter your pitch or the content once Action Lab decided to publish it?

DANIEL: We wrote and drew all of Holy F*ck before we ever pitched it. When Action Lab said yes, all I had to do was go in and color the whole thing. Holy F*cked was pretty similar. Once Action Lab showed interest in a sequel, we just got to it.

NICK: We've only been asked to make alterations to our covers. Action Lab has been awesomely supportive and hands off when it comes to the story.

Daniel, was there ever a point when you turned to Nick and  said, ”Dude, I’m not drawing that.”

DANIEL: Yes. Nick wrote a one page sequence which involved a small army of possessed animals. In one page they were to be revealed, get possessed, and exorcised again. Nick wanted me to draw this in four panels, but I think I needed fourteen.

NICK: Haha! Yeah, that script was overly ambitious. In its place, we came up with a fantastic fart joke so I think it all worked out for the best.

DANIEL: I always try to put fart jokes in everything. 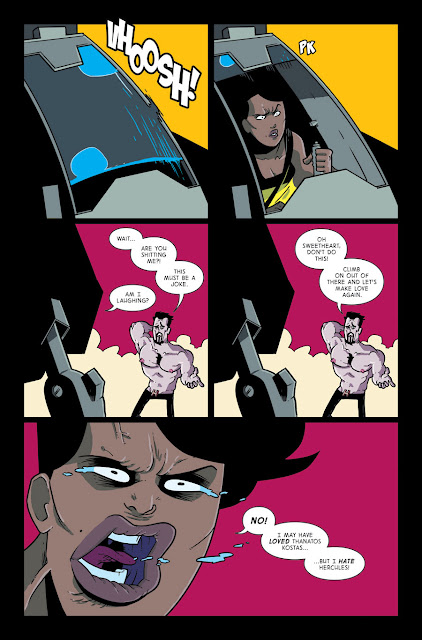 Just how much thought went into designing Jesus’ manhood    for that shower scene?

DANIEL: I felt it just had to be done. In the history of comics, similar scenes have been drawn with a woman, so why not have one with a dude?

NICK: This one was all Daniel! My script called for the issue's title to cover up J-Man's cock, keeping "the body of Christ" a true mystery.

1       Going forward, what’s in store for Jatan or is it Sasus? What can we expect in the next chapter of Holy F*ck?

DANIEL: Jesus and the Army of Atlantis. On his day off, JC decides to go surfing only to disappear! Where did he go? Will we ever see him again? Meanwhile, Satan decides to get a real estate license.

NICK: Whoa, I didn't know about any of that. Atlantis? S'okay. But I'm LOVING this realtor direction for Satan!

Right now, we don't have any plans for more Holy F*ck. But if you're reading this interview and want that to change, then make your voice heard! Buy the books, share them with people, post about them online, and ask Action Lab for a threequel. Then maybe it'll happen.

DANIEL: What about Holy F*cksticks? Jesus becomes the new drummer for KISS and Maria dies.

What other stories outside of Holy F*cked do you have planned, either together or separately?

DANIEL: Nick and I are breaking up... psych! We've got a lot of stuff planned.

NICK: Shit, it's more than just planned! We're almost done with our next story. It's 110 pages of salacious superhero satire. No publisher yet, though, so we can't say anything else about it right now.

As for what comes after that? We're already drumming around some insane ideas and seeing what sticks.