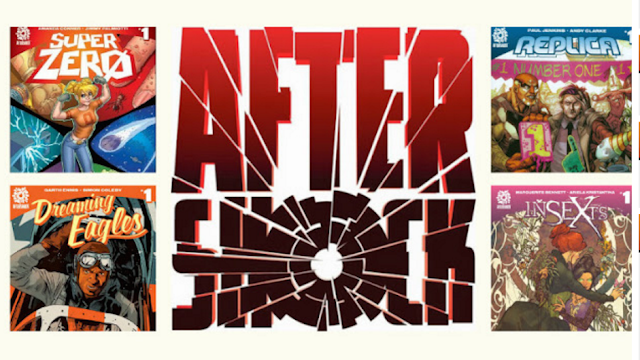 What do you do if you're a fledgling comic book publisher stacking your stables with some of the best talent in the business? You shout it from the rooftops first then you make sure it's as accessible to the masses as humanly possible. AfterShock Comics, an upstart that has so far this year released books by veterans Jimmy Palmiotti, Amanda Conner, Garth Ennis, Brian Azzarello, Paul Jenkins and others, is going to make it easier to find by partnering with Comixology and Amazon.

You'll now be able to get AfterShock's current and future comics straight from your digital device by going directly to Comixology or Amazon's Kindle store.“Since our official launch less than a year ago, AfterShock has experienced incredible traction and acclaim through our inaugural titles from some of the industry’s most celebrated creators,” said Mike Marts, AfterShock’s Editor-in-Chief. “We’re extremely proud of our growing content library and excited to offer AfterShock’s current and future titles to a much wider audience through this partnership with comiXology and Kindle.”

AfterShock's embarrassment of rich talent is getting even more embarrassing as legendary writer Mark Waid (Daredevil, Archie, Kingdom Come, and a million other books) will be collaborating with Tom Peyer to bring 'Captain Kid' this summer. 'Captain Kid' is about a middle-aged comic book fan who transforms into a teenage superhero. Waid is obviously playing to the crowd with this reverse-Shazam fantasy that will surely be a hit.

Also, April will have three new titles from the AfterShock all launching for the low, low price of $1.99.

ROUGH RIDERS #1(W) Adam Glass (A) Pat Oliffe (CA) Pat OlliffeLed by a young Theodore Roosevelt, a motley crew of soon-to-be American legends must work together to solve a mystery that threatens all of existence. Harry Houdini – street magician and master of misdirection. Annie Oakley – a washed-up entertainer, eager for a chance to prove herself in a real war. Jack Johnson – an undefeated brawler and the son of ex-slaves, determined to get his shot at the heavyweight championship… When a terrifying alien technology destroys the USS Maine, these unlikely allies set sail for bloody Cuba, into the heart of a brewing conflict, to wage a shadow war against the greatest threat mankind has ever known. Before they were famous, they were… ROUGH RIDERS.4/6/2016SRP: $1.99

JACKPOT! #1(W) Ray Fawkes (A) Marco Failla (CA) Brian StelfreezeMeet the World’s Greatest Con Artists on the eve of the greatest scam in human history –ripping off the Gods themselves! The high-stakes, high-octane story of JACKPOT! begins here! Ray Fawkes, acclaimed creator of INTERSECT (writer of Gotham by Midnight and Batman: Eternal) teams up with Marco Failla (Spider-Man & the X-Men) to bring a new mind-bending, genre-busting monthly series from AfterShock!In Shops: 4/13/2016SRP: $1.99

BLACK-EYED KIDS #1 (MR)(W) Joe Pruett (A) Szymon Kudranski (CA) Francesco FrancavillaIt’s dark. You’re alone. Then there’s a knock. You open the door to find two seemingly normal kids. They ask to come in, to borrow your phone to call for a ride. You find yourself overcome with an intense fear that you can’t explain. And then you notice their eyes… black… SOLID black. You want to run, but now they’re inside. It’s too late. They have you. Eisner Award winner Joe Pruett (X-Men Unlimited, Cable) is joined by artist Szymon Kudranski (Spawn, Penguin: Pain and Prejudice) for this terrifying new horror series.In Shops: 4/20/2016SRP: $1.99
Here are the on-going AfterShock titles coming out in April:

REPLICA #5 (MR)(W) Paul Jenkins (A/CA) Andy ClarkeIn which we meet Number 5 – a legal genius who was undercooked during the cloning process and came out half-baked. In which Trevor and the gang at the Precinct run afoul of the dreaded Scarlet Empire. In which our trusty heroes go for a “round of golf” and decide instead to undertake a naked assault on an alien Embassy. Because, you know… Tuesday.In Shops: 4/6/2016SRP: $3.99
INSEXTS #5 (MR)(W) Marguerite Bennett (A/CA) Ariela KristantinaAmbushed by an ancient and mysterious order, the lovers battle monsters in the shadows of London. With their true enemy revealed at last, Lady and Mariah race to rescue the stolen women from the clutches of the Hag!In Shops: 4/13/2016SRP: $3.99

SECOND SIGHT #3 (MR)(W) David Hine (A/CA) Alberto PonticelliRay Pilgrim’s visions are becoming more disturbing and the bodies are piling up. His investigative daughter Toni is convinced if they are going to stop the slaughter her father must tell her the truth about the past and his relationship with the twisted killer known as The Reaper.In Shops: 4/20/2016SRP: $3.99
SUPERZERO #5 #5(W) Amanda Conner, Jimmy Palmiotti (A) Rafael de Latorre (CA) Amanda ConnerDru takes the ultimate ride and winds up interacting with her new best friends in the space station orbiting Earth…but all is not as it seems when Dru’s dreams become a reality in the worst way.In Shops: 4/27/2016SRP: $3.99
Read the entire press release below:

“Since our official launch less than a year ago, AfterShock has experienced incredible traction and acclaim through our inaugural titles from some of the industry’s most celebrated creators,” said Mike Marts, AfterShock’s Editor-in-Chief. “We’re extremely proud of our growing content library and excited to offer AfterShock’s current and future titles to a much wider audience through this partnership with comiXology and Kindle.”

Today’s digital debut of AfterShock Comics on comiXology and the Kindle Store sees all the following titles available, with the addition of Strayer #1 on January 27th:

The Kindle Store gives readers access to millions of books on the most popular devices and platforms, including Fire tablets, Kindle e-readers, iOS, Android and more.

With over 75,000 comics, graphic novels and manga from more than 75 publishers, comiXology offers the widest selection of digital comics in the world. ComiXology’s immense catalog and cinematic Guided View reading experience make it the best digital platform for comic fans worldwide.

Launched in April 2015, AfterShock Comics is a comic book company that combines the creative edge of an independent comic book publisher with the strengths and experience of a traditional powerhouse. In addition to Editor-in-Chief Mike Marts, formerly executive editor at both Marvel and D.C., AfterShock’s executive team includes: Publisher Joe Pruett; CEO Jon Kramer, an entertainment entrepreneur with extensive worldwide production and distribution experience; President Lee Kramer, a film/TV production and development executive who has worked with some of the biggest names in Hollywood; and Senior VP of Investor Relations Jawad Qureshi, an experienced Silicon Valley entrepreneur and investor.

ComiXology, an Amazon.com, Inc. subsidiary (NASDAQ:AMZN), has revolutionized the comic book and graphic novel industry by delivering a cloud-based digital comics platform that makes discovering, buying and reading comics more fun than ever before. ComiXology's Guided View reading technology transforms the comic book medium into an immersive and cinematic experience, helping comiXology become a top ten grossing iPad app in 2011 and 2012 and the top grossing non-game iPad app in 2012 and 2013. Offering the broadest library of comic book content from over 75 publishers - and independent creators as well - comiXology will not stop until everyone on the face of the planet has become a comic book fan. ComiXology is based in New York City, with operations in Seattle, Los Angeles and Paris. For more information visit www.comixology.com.