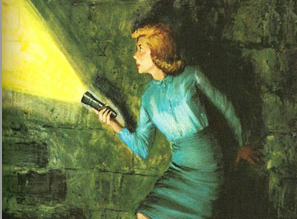 The famous girl sleuth from Hardy Boys author Edward Stratemeyer, Nancy Drew, that debuted back in 1930 and went on to appear in a series of books, movies, television shows and video games is coming to CBS. The network greenlit a pilot featuring a reimagined version of the amateur detective called Drew, aged her to her thirties, made her a real NYPD detective and will be a person of color.

“She is diverse, that is the way she is written,” CBS president Glenn Geller recently told reporters at the Television Critics Association winter press tour. “I’d be open to any ethnicity. … We’re not casting color-blind, we’re casting color-conscious. It’s not ‘the best actor wins,’ it’s the right roles for diversity. … It really is about being conscious of what America looks like. It is always going to change, it’s going to evolve, and we’re aware of that, which is why we’re making efforts every year to get more diverse.”

The revamp of the traditionally younger mystery solver fits right in the CBS mold of procedural crime dramas. It could make a good companion series to the other modern reimagining of a classic detective in the Sherlock Holmes inspired 'Elementary.'

In this contentious time of film's lack of diversity especially when it comes to recognizing black actors for their work, television continues to the inclusive medium for people of color. CBS hasn't been the standard for such diversity thus far so the fact that they're actively looking for a diverse lead is a step in the right direction.