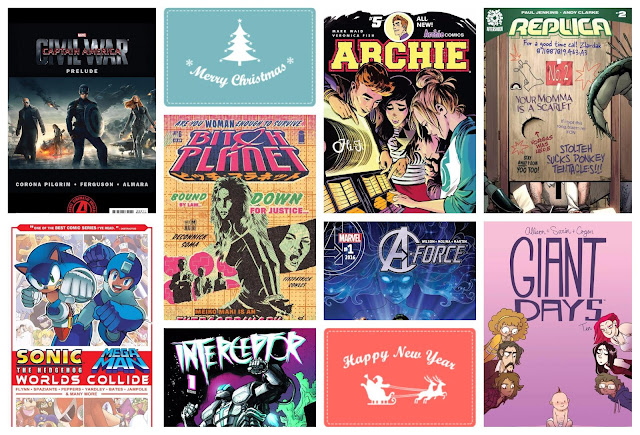 Happy New Year! A new year, a new us as we've revamped our website and are still tinkering with new comic book releases slideshow. Now the music-infused slideshow includes captions with comic titles. There are some great books to open the new year with like Paper Girls, The Sheriff of Babylon, Archie, Bitch Planet, and many more. Also, some impressive debuts like Len Wein's return to a new Swamp Thing series at DC Comics, Donny Cates and Dylan Burnett drop a great new title for Heavy Metal Comics with Interceptor, and Ed Brisson with Lisandro Estherren add a new twist to The Last Contract. Start the year off right with one of these great new books. 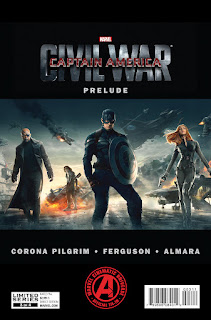 (W) Will Pilgrim (A) Lee Ferguson (CA) TBD
THE ROAD TO CAPTAIN AMERICA: CIVIL WAR BEGINS WITH THE OFFICIAL ADAPTATION OF THE SMASH HIT FILM CAPTAIN AMERICA: WINTER SOLDIER!
•  When CAPTAIN AMERICA encounters an assassin named THE WINTER SOLDIER, he joins forces with BLACK WIDOW and FALCON to uncover a deepseated conspiracy in their very midst!
•  It's spy versus spy as the fate of the country hangs in the balance!
Rated T+ 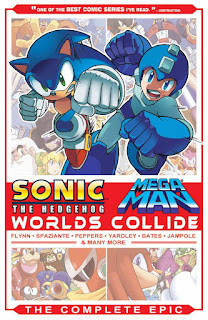 (W) Ian Flynn (A) Ben Bates & Various (CA) Patrick Spaz Spaziante
It's the crossover of a lifetime! The team-up you've been dreaming of! Two of videogame history's most iconic heroes come together for the greatest action story ever told! SONIC THE HEDGEHOG and MEGA MAN unite in WHEN WORLDS COLLIDE! It all begins with a meeting of the minds--EVIL minds! Dr. Wily makes contact with Dr. Eggman, and the two malicious mechanics conspire in a plan that will reshape entire worlds! Using the power of the Chaos Emeralds, they build themselves an unstoppable army of Robot Masters and Roboticized Masters--Sonic's corrupted friends! It's pan-dimensional panic as Sonic and Mega Man race to uncover the doctors' diabolical plot, save Sonic's friends, and brave the nightmarish landscape of the Skull Egg Zone! Along the way they gain new allies, Mega Man gains all new powers, and the stakes keep getting higher until two universe hang in the balance! You CANNOT miss this critically acclaimed crossover! Celebrated by old and new fans alike, beloved by critics and casual readers, this is one big love letter to all things SONIC and MEGA MAN! WORLDS COLLIDE collects the entire crossover event, containing SONIC THE HEDGEHOG #247-251, SONIC UNIVERSE #51-54, MEGA MAN #23-27 and material from SONIC THE HEDGEHOG #252 and MEGA MAN #28.
Script: Ian Flynn
Art: Jamal Peppers, Tracy Yardley, Ben Bates, Ryan Jampole, Evan Stanley, Terry Austin, Gary Martin, Jim Amash, John Workman, Jack Morelli, Thomas Mason, Dustin Evans, Matt Herms and Steve Downer.         Cover: Patrick "SPAZ" Spaziante and Matt Herms
Previews-exclusive Variant Cover: Patrick "SPAZ" Spaziante and Matt Herms 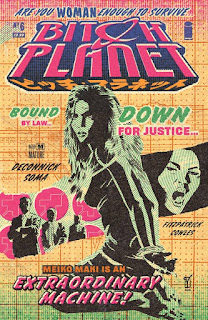 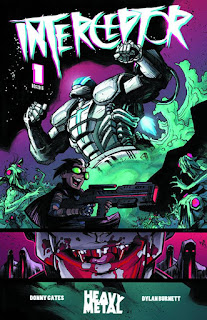 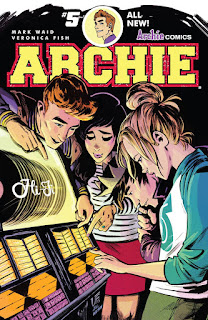 (W) Mark Waid (A) Veronica Fish & Various (CA) Veronica Fish
Betty and Jughead have declared war on Veronica over the heart and soul of Archie Andrews!  Who should you be rooting for? You might just be surprised by the answer! Rising star comics artist Veronica Fish (Pirates of Mars, the Riverdale CW promo image) joins the legendary Mark Waid on creative duties for this brand new issue! 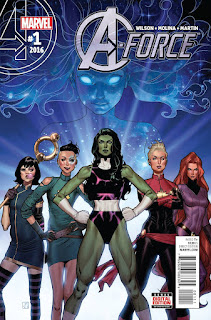 (W) G. Willow Wilson (A/CA) Jorge Molina
A-FORCE, ASSEMBLE! From the ashes of Battleworld, Marvel's newest hero SINGULARITY has risen and entered the Marvel Universe. But she didn't make the journey alone. To combat the most fearsome threats from across the multiverse, Singularity will summon the world's mightiest team of Avengers to her side: SHE-HULK. CAPTAIN MARVEL. DAZZLER. MEDUSA. NICO MINORU. Together, they are A FORCE to be reckoned with!
Rated T+ 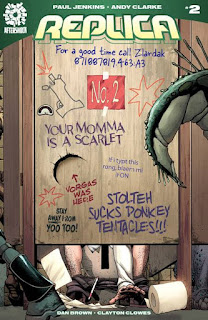 (W) Paul Jenkins (A/CA) Andy Clarke
Number Two! In which Detective Trevor Churchill of the Terran Corporation discovers the only person more annoying than his alien partner is a clone of himself. In which we visit with Number Two, Trevor's overworked and under-appreciated right-hand man. And in which Number Two gets lucky while drowning in a sea of bad luck. Meanwhile, a murder investigation hits a snag when the detectives in charge turn out to be as brain dead as the victim! 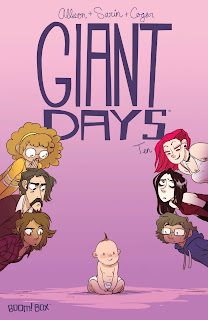 (W) John Allison (A) Max Sarin (CA) Lissa Treiman
Esther's old school friend "Big Lindsay" comes to visit with her baby, but watching the kid and being nice to the insatiable party girl begins to wear on everyone. 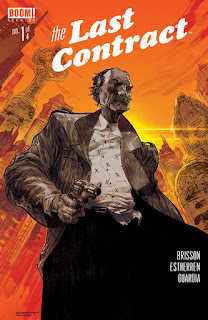 (W) Ed Brisson (A/CA) Lisandro Estherren
What's to Love: Last year, John Wick reminded everyone why hitmen make for awesome stories. Of course, we've known that for years as evidenced by The Killer and Hit. Ed Brisson's (Cluster, Sheltered) take on a retired hitman who finds himself as the target is a well-paced thriller that kept us guessing until the end, and newcomer Lisandro Estherren's (Tall Tales from the Badlands) noirish art perfectly sets the mood.

What It Is: A retired hitman, known only as "The Man," is forced back into the game when a list of his kills is leaked by a mysterious Broker. The list makes targets out of anyone associated with one of the The Man's previous jobs, not to mention The Man himself. As he fights to protect those the list exposes, The Man sets off to uncover the identity of the Broker so he can move on with his new life once and for all. But will the truth ruin those chances forever? 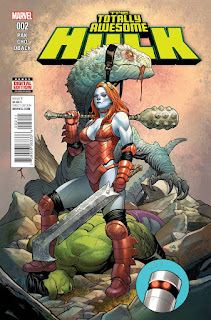 (W) Greg Pak (A/CA) Frank Cho
CHO TIME CONTINUES AS THE HULK TAKES ON THE BIGGEST MONSTERS IN THE MARVEL UNIVERSE!
•  But can Amadeus handle the brand-new danger of Lady Hellbender?
•  Also: Trouble in the family! Snack time with Spidey! And more revelations about just what the devil happened to Banner!
Rated T+ 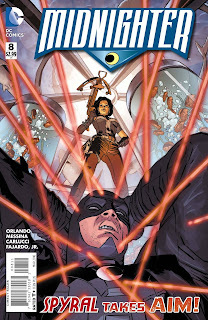 (W) Steve Orlando (A) David Messina (CA) Aco
As he recovers from an assault that hit him harder than he ever could have imagined, Midnighter finds himself back in the sights of Spyral...but this time, they want him on their side! 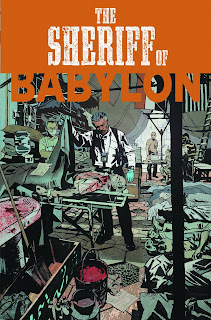 (W) Tom King (A) Mitch Gerads (CA) John Paul Leon
Chris Henry is an American contractor in Iraq with a dead body on his hands and no idea what to do with it. That's why he needs Nassir, one of the country's last remaining old-school lawmen, to return the slain man to his family. Yet, with Saddam Hussein long gone and Nassir's badge long since retired, just what is motivating the man to help out? 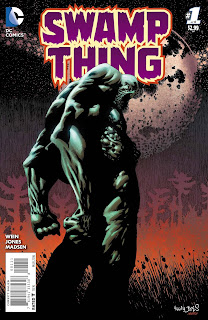 (W) Len Wein (A/CA) Kelley Jones
Swamp Thing returns in an all-new series written by his co-creator, legendary writer Len Wein! Swamp Thing has received an ominous warning, and now he finds himself under attack from the forces of dark magic. These are more than just your average monsters-and there's something much worse looming on the horizon for Alec Holland! 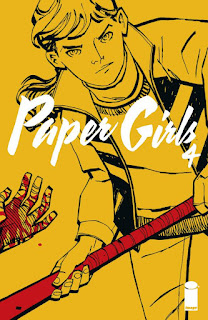 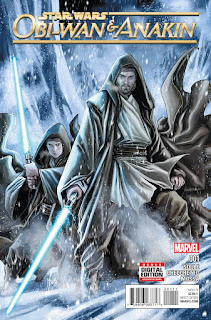 (W) Charles Soule (A/CA) Marco Checchetto
Before their military heroism in the Clone Wars, before their tragic battle on Mustafar, and many decades before their final confrontation on the Death Star...they were Master Obi-Wan Kenobi and his Padawan learner, Anakin Skywalker. It's been a few years since Obi-Wan pledged to train the young "chosen one," but even as they have grown closer through training, it has been a difficult road. Now, called to a remote planet for assistance, Master and Padawan may be pushed to the breaking point. Writer Charles Soule (Lando, She-Hulk, Daredevil) and artist Marco Checchetto (Star Wars: Shattered Empire, Avengers World, Punisher) bring us a tale of the Jedi at the height of their power...
Rated T 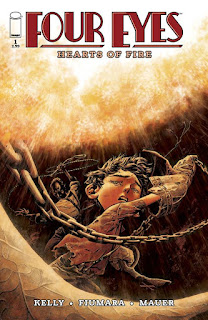 (W) Joe Kelly (A/CA) Max Fiumara
Launching the second arc in the critically-acclaimed story of a boy and his dragon on the hunt for revenge in Depression-era New York City. The training begins.