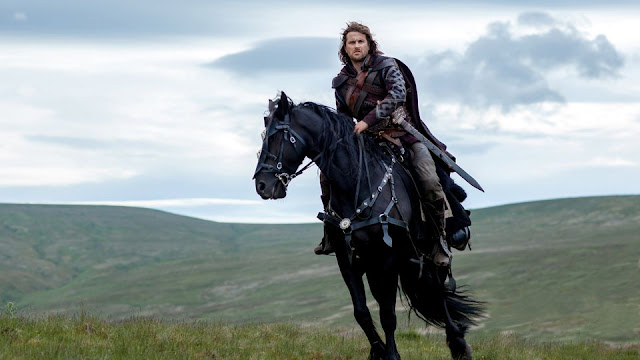 Long before 'Game of Thrones' and 'Lord of the Rings', Beowulf was the source for swords, monsters, and dragons. The epic poem, the oldest of its kind in Old English, followed the titular Scandinavian hero as he protected everyone from the beasts that lurked the countryside. You could say this is the origin story for every fantasy story you ever heard of.

The ITV production comes to the States by way of the fledgling Esquire Network as their second scripted series. The show demonstrates their fantasy bonafides straight from the beginning. We witness a young Beowulf and his father running from a pair of monsters on a beach. It leads to his father's death and the boy avenges him in a cool sequence. The CGI work is average but it delivers a world building moment and introduces Beowulf's soon to be adoptive father in the Thane of Herot, Hrothgar (William Hurt).

We are then thrust into the familial drama that accompanies stories of royal families. Even as a child Hrothgar's son Slean (Ed Speleers) isn't too happy with his new brother, jealous and resentful lashes out but is no match for the child phenom Beowulf. Hrothgar's wife Rheda (Joanne Whalley) doesn't like the favoritism he shows to Beowulf either despite it being clear Slean doesn't have the temperament or smarts to someday become king.

That comes to bare when after being banished from the kingdom, Beowulf (Kieran Bew who distractingly resembles a young Billy Ray Cyrus) returns years later to the Shieldlands and Herot to reconcile with Hrothgar who's on his deathbed. Alas, he's too late and Rheda has taken over as ruler of the kingdom making Slean a pouty slick-haired sourpuss. Seeing Beowulf ruffles his feathers even more.

In order to flesh out the story, creators James Dormer, Tim Haines, and Katie Newman turn to familiar adventure tropes to make it all relatable and fill in the poem's blanks. Beowulf arrives with his buddy Breca (Gísli Orn Garoarsson), who's the quippy lothario sidekick, and are soon on the trail of Grendel to save the damsel in distress and town healer Elvine (Lauren Donnelly). Who also happens to be Slean's love interest but the arrival of Beowulf has caught her attention setting up a potential love triangle. Slean also believes he should be king and he could be conspiring against his mother to gain the crown. A lot of soapy plotlines to chew on as the season moves forward.

There are plenty of positives in 'Beowulf' that make it different to what's available in the swashbuckling sword fantasy genre. Unlike, 'Thrones' and History Channel's 'Vikings,' the sex and violence are toned down to be more family-friendly by comparison. There's no gore or explicit sexy time. The monsters or "Mud-borns" are frightening but not overly grotesque. The show's been designed to be more accessible to audiences who like their 'Downton Abbey' with an occasional cat-bear-hybrid monster thrown in. Lolita Chakrabarti, who plays the feisty blacksmith, has an independent spirit that feels refreshing. Donnelly's Elvine is smart and confident.

Unfortunately, it doesn't feel like enough to stand out among those other shows. The CGI is just okay, the storylines are a bit clichéd, Bew doesn't exhibit enough charm or nuance yet, the fight choreography is underwhelming and it plays out by the numbers. 'Beowulf' lacks the passion and ambition to become the PG-rated 'Game of Thrones' it's trying so desperately to be. I'll stick with it, for now, to see if the material elevates with future episodes.