REVIEW: 'The Black Hood' #8 by Duane Swierczynski and Robert Hack 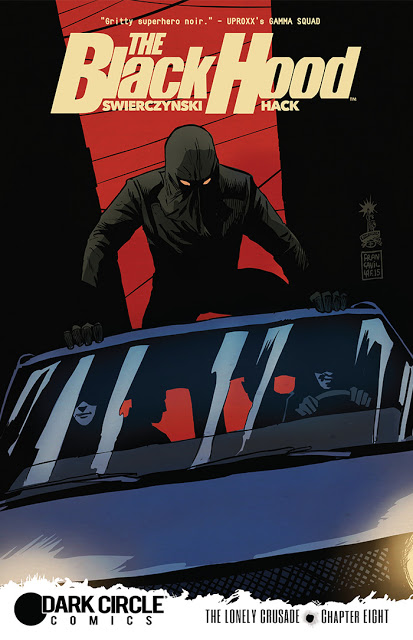 'The Black Hood' continues to chronicle the rocky ride of Greg Hettinger from policeman to vigilante to drug-addicted vigilante cop, to recovering addict. Unfortunately, he can't seem to kick the habit of getting his ass beaten. Duane Swierczynski keeps painting a realistic and gritty picture of a regular guy, a non-superhero, who stubbornly seeks justice despite the odds against him. Special guest artist Robert Hack keeps the streets of Philadelphia dirty and dark in this latest installment of the 'Lonely Crusade' arc.

The issue opens up with Hettinger in mid-fight with the cultish Crusaders and he's outnumbered, outgunned, and homeless people caught in the crossfire. It's an untenable situation that has become his modus operandi. Yet, no matter how many big shots he takes he doesn't given up even when most smart people would turn and run away. No one would blame him if he drew his gun and started firing back. His moral code, however selective, refuses to kill.

As a street level hero, The Black Hood is an admirable protagonist who fights for justice no matter the odds. It sometimes means being on the receiving end of gun fire, fists, or bats like he is in this issue. Swierczynski has made Hettinger more human than most comic book vigilantes. He's not likely to be armed to the teeth mowing down the bad guy. This is really more a three dimensional character study of a guy who's convinced himself that he needs to be on the street administering justice in ways he can't while in uniform. Although, this compulsion to be a hero is just a substitute for his other addicition - painkillers. Clean and sober, still wearing the hood but lying to Jessie makes Hettinger seem small and irrational. He has to lie to coworkers about his injuries (there are many) and the downward spiral begins anew. He's a perfectly flawed character that makes 'The Black Hood' more compelling for it.

Hack does a wonderful job of keeping the dreary and grimy atmosphere of Philly that Michael Gaydos had established. A far cry from his more colorful and classical look of his work on Archie Comics' Chilling Adventures of Sabrina. Hack choreographs the fight for maximum effect getting in tight with every bloody punch, kick or ladder to the face. And can still muster nuance with facial expressions and body language. Kelly Fitzpatrick keeps the pallete muddy with splashes of cardinal and earhtones.

'The Black Hood' is a down and dirty street tale of a determined cop turned vigilante that is doing everything he can to make the streets safer even if it kills him. And it almost does. It's this type of realistic portrayal that makes Hettinger a compelling figure for everything he does right and everything he does wrong. He's no all-powerful gun-toting savior and that's okay. He might be misguided but damn is it gripping.
Email Post
Labels: Black Hood comic books Dark Circle Comics Duane Swierczynski reviews Robert Hack