REVIEW: 'The Hangman' #2 by Frank Tieri and Felix Ruiz 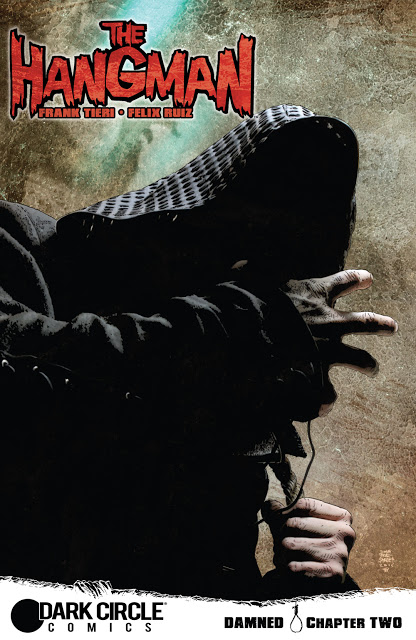 It doesn't happen very often when the second issue of a new series surpasses its debut. 'The Hangman' #2 does just that with a trip to hell and an offer the newly murdered hitman Mike Minetta can't refuse.

The first issue was a fast-paced run-up to Mike getting offed by The Hangman himself in the middle of one of his disposal jobs. It left me with more questions than answers but the execution (pardon the pun) was an adrenaline rush. Now in issue two we get to the heart of the matter as our antihero wakes up in the depths of hell. The opening sequence is pretty impactful as the people he's killed are alive, still showing the damage they were left with - gunshots, severed heads, stab wounds - and they're all out to get them. In steps in the beastly lord of the underworld himself.

Surprisingly, Mike isn't as impressed or frightened as one would expect to be if Satan himself, horns and all, descended before them. Mike expected to wallow in eternal hellfire for his sins. The proceeding dialogue shows Tieri's strength. The banter, blunt and profane, never feels forced and very much conversational. Mike, the ever-defiant lost soul welcoming his fate in the pits of hell and the devil himself, transformed from beast to suited, goateed executive of hades, are having a pissing contest.

Eventually, Satan has his fill of Mike's insolence and shows him who's boss. In the end, the offer to become the new Hangman in the hopes he'll bring in plenty of other vile, hideous, wretched souls to meet their doom in exchange to ascend into heaven becomes a hard sell. And of course, Satan has an ace up his sleeve and uses it to win.

Stylistically, Felix Ruiz provides a grim and nightmarish landscape as is fitting for a place like hell but his character designs are just as unclean. Ruiz creates an ugly world for ugly people. A rough sketchy approach to line-work that works in this dark and gloomy world. Kelly Fitzpatrick does a great job of trying to bring some light and color amid the shadows and piles of dead tortured souls. Satan's initial cardinal-colored appearance was especially well done.

'The Hangman' #2 does the impossible as it improves on the first issue while taking on a familiar plot and making it fresh with great dialogue and haunting images. If you're looking for a grimy supernatural horror story of a reluctant angel of death sent to earth directly on Satan's orders to kill society's worst then this is the book for you.
Email Post
Labels: comic books Dark Circle Comics Felix Ruiz Frank Tieri reviews The Hangman