Indigo Promises an "Age of Chaos" with 4 New 'Supergirl' Clips 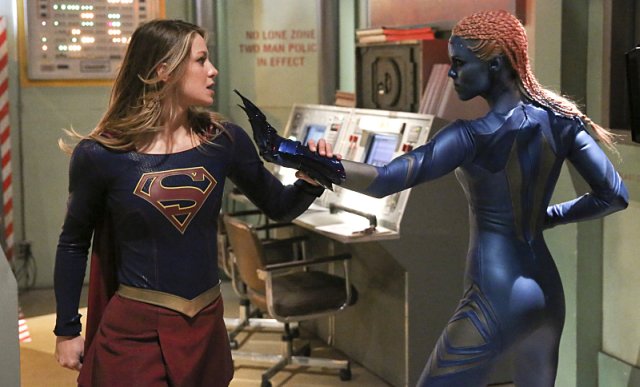 Laura Vandervoort (Smallville's Supergirl) makes her debut as hacker turned supervillain Indigo. The resemblance to Marvel's Mystique is unavoidable but she's able to travel via the Internet and has a connection to Kara's past. The "age of chaos" Indigo threatens to rain down on National City prompts Kara to visit Superman's Fortress of Solitude to find a way to defeat her. Meanwhile, office politics between Siobhan, Kara and Cat still make for an uncomfortable situation. James and Lucy have issues between themselves to figure out. See all three new sneak peeks for Monday's "Solitude" episode.

"Solitude" -- Kara travels to Superman’s Fortress of Solitude in hopes of learning how to defeat Indigo (Laura Vandervoort), a dangerous being who can transport via the Internet and who has a connection to Kara’s past. Also, James’s relationship with Lucy reaches a crossroads, on SUPERGIRL, Monday, Feb. 29 (8:00-9:00 PM, ET/PT) on the CBS Television Network.