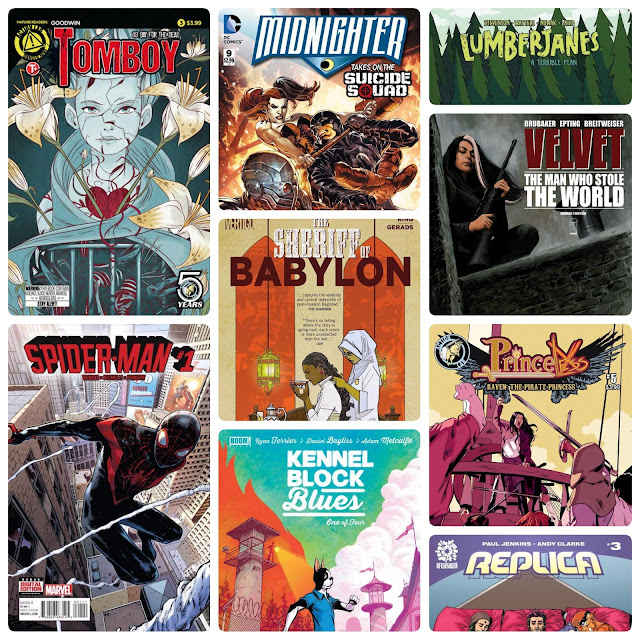 First batch of comics for February have arrived with this week's notable new releases. A lot to choose from, probably too many great choices actually, as there's some intriguing  debuts, some great ongoing, and fantastic trades available today. I hope you all saved up some money to buy them all. Spider-Man #1 gets yet another relaunch, Kennel Block Blues #1 is another quirky Ryan Ferrier gem, Dejah Thoris #1 goes solo with Frank Barbiere, I, Mage #1 is a magical new title from Action Lab, and Mirror #1 is a beautiful new series from Emma Rios. If you're looking for trades check these out: Red Sonja/Conan, Goon Library Vol. 2 HC, THE WICKED + THE DIVINE:Volume 3 "Commercial Suicide!," and  Lumberjanes: Volume 3 "A Terrible Plan!" Happy reading! 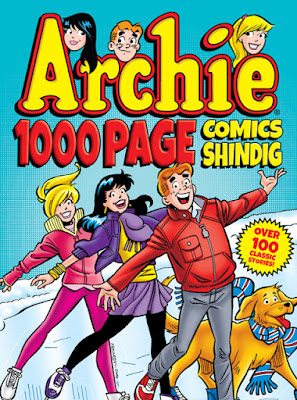 1st printing. Cover by Dan DeCarlo. Put on your dancing shoes and head on over to a Shindig of your favorite Archie comic stories! In this edition of the Archie 1000 Page Comics series, get ready to laugh until your sides hurt and have as much fun as possible along with Archie & his pals 'n' gals! For 75 years, Archie and his friends have been making everyone laugh, with their dating hijinx and misadventures at Riverdale High School! Everything's Archie in the largest Archie collection series ever, offered at an incredible value price! Softcover, 5-in. x 7-in., 1,000 pages, full color. Cover price $14.99. 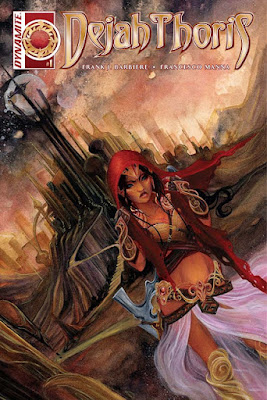 Written by Frank J. Barbiere. Art by Francesco Manna. Cover by Nen. Prepare yourself for Dejah Thoris as you've never seen her before! A shocking conspiracy unravels in Helium as Dejah's father has gone missing. In the wake of assuming the throne, Dejah learns secret information from her past that will have resounding effects on the kingdom - and her life! Dejah discovers a secret past that will have her leaving Helium for an all-new adventure on her own! Cover price $3.99. 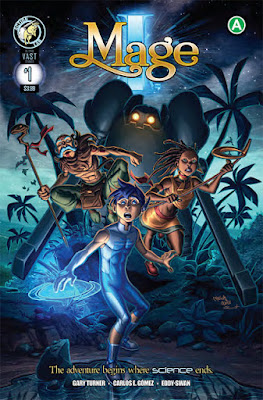 Written by Gary Turner. Art by Carlos E. Gomez. Cover by Carlos E. Gomez and Teodoro Gonzalez. Into a realm of magic and savagery comes a mysterious boy washed ashore. His is a lone survivor. Befriended by an apprentice magi, her quirky mentor, and a metal golem, together they are Kai's only hope to stay alive long enough for rescue. Prepare yourself for a d20 RPG adventure with an all new twist. Cover price $3.99. 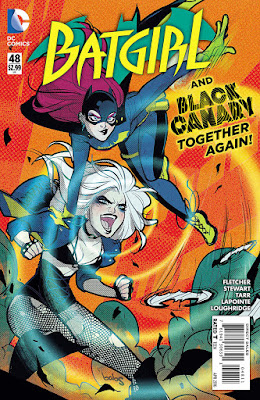 Written by Cameron Stewart and Brendan Fletcher. Art and Cover by Babs Tarr. When Batgirl is down, it's Black Canary to the rescue! Dinah and Barbara reteam to try to discover the identity of the malevolent mastermind making their presence felt in Burnside! Cover price $2.99. 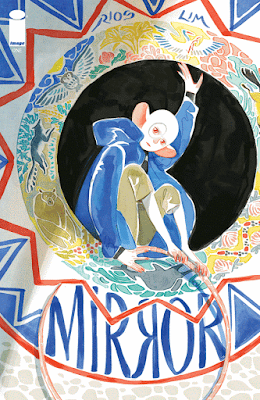 Written by Emma Rios. Art and Cover by Hwei Lim. A new ongoing series, following a terrorist talking dog, an idealist mage, and a heroic lab rat on their quest for acceptance. Cover price $2.99. 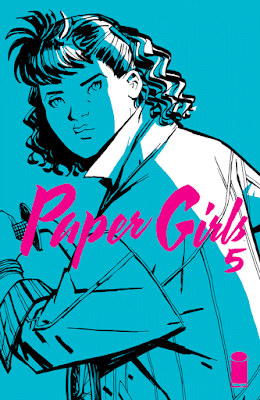 Written by Brian K. Vaughan. Art by Cliff Chang and Matt Wilson. Cover by Cliff Chang. The first arc of the smash-hit ongoing series concludes with major revelations and another game-changing cliffhanger. Lots of answers to our major mysteries in this issue, as well as a final page that will completely transform the book's status quo before our series's first regularly planned hiatus. Cover price $2.99. 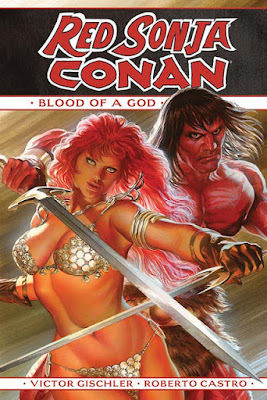 1st printing. Collects Red Sonja/Conan (2015 Dynamite) #1-4. Written by Victor Gischler. Art by Roberto Castro. Cover by Alex Ross. Red Sonja, the fiery She-Devil with a Sword. Conan, the relentess barbarian from Cimmeria. The two legendary heroes of the Hyborian Age are reunited once more, captains in a mercenary army drawn together to wage war on an evil sorcerer. With good swords at their side and loyal men at their backs, Sonja and Conan believe themselves more than capable of defeating Kal'Ang, an ambitious herbalist whose power resides in Blood Root experimentation. But little do they know, a shadow of the past has returned, a foe both familiar and fearsome... and whose secret goal is nothing short of divinity! Hardcover, 96 pages, full color. Cover price $19.99. 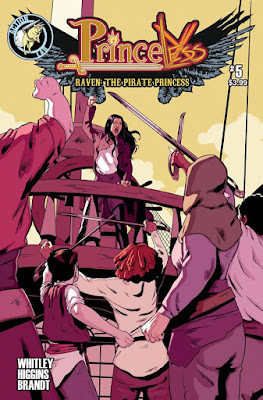 Written by Jeremy Whitley. Art and Cover by Rosy Higgins and Ted Brandt. Raven and her crew have set sail and set their sights on revenge. But when the idea of adventure meets up with the reality of a crew full of relative strangers living in close quarters, will the crew pull each other apart before their first real mission? Cover price $3.99. 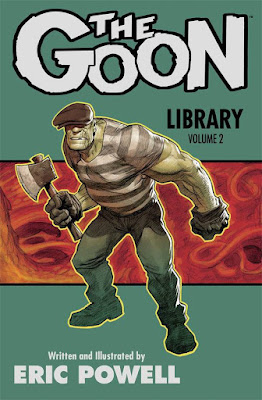 Volume 2 - 1st printing. Collects Goon TPB (2003-Present Dark Horse) 1st Edition Vol. 4-6. Story and art by Eric Powell. Lonely Street comes under all manner of threats both tragic and hilarious in this deluxe hardcover edition of The Goon. A mysterious new figure has entered the crime scene and is taking out the Goon's business operations one by one-systematically intercepting shipments, murdering contacts, and alienating friends. As Goon struggles to keep the city's organized crime under his control, his mind is haunted by the memories of his darkest moments . . . Hardcover, 496 pages, full color. Cover price $39.99. 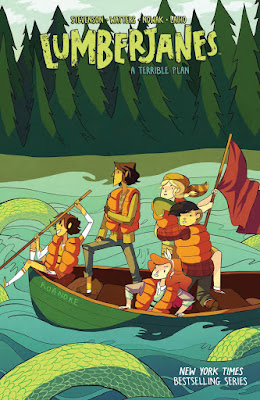 Volume 3 - 1st printing. "A Terrible Plan!" Collects Lumberjanes (2014) #10-12 and material fromBoom! Studios Halloween Haunt (2015 Boom Studios) Halloween ComicFest 2015. Written by Noelle Stevenson and Faith Erin Hicks. Art by Carolyn Nowak. Cover by Noelle Stevenson. It's a free day at Lumberjanes camp, and the Roanoke cabin is...bored out of their skulls. With nothing to fight the girls set themselves to earning all the badges they can that don't involve monsters or the supernatural, which is surprisingly hard! When Mal and Molly sneak off in search of real adventure, they accidentally stumble into something more than they ever bargained for. Softcover, 112 pages, full color. Cover price $14.99. 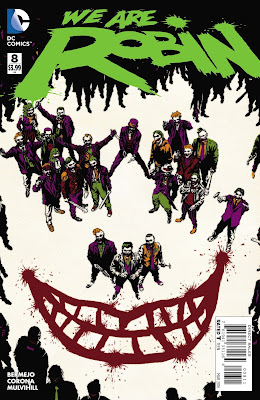 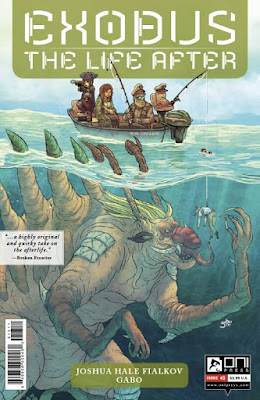 Written by Joshua Hale Fialkov. Art and Cover by Gabo. A conversation between the great 20th century novelist Ernest Hemingway and the great cosmic creator God Potato. Also: Nettie and Essie air their grievances, and the Potato reveals the mysteries of the universe. Cover price $3.99. 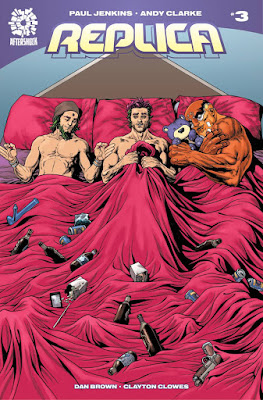 Written by Paul Jenkins. Art and Cover by Andy Clarke. In this issue we meet Number Three, a hippy, stoner, dropout of the highest (or lowest) order whose laziness drives Trevor absolutely insane. We also continue our pentacontagon love affair), the Scarlet are still a pain, Veet-Bot shows his fighting capabilities, a witness actually survives protective custody, and Vorgas gets stoned! Mature Readers Cover price $3.99. 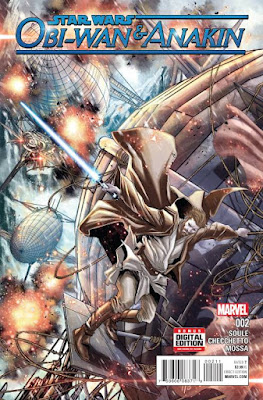 Written by Charles Soule. Art and Cover by Marco Checchetto. Master and Padawan find themselves stranded on an unfamiliar world... …a world of strange, primitive technology and dangerous natives. But even if they can save themselves...why were they called to this world? Rated T Cover price $3.99. 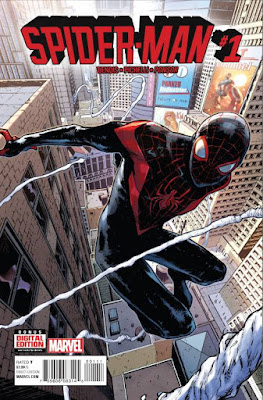 Written by Brian Michael Bendis. Art and Cover by Sara Pichelli. Miles Morales has been doing the super hero thing for a while, now, but after SECRET WARS, he'll be a full-fledged member of the Marvel Universe. Swinging next to The Invincible Iron Man, The Mighty Thor and the All-New Captain America as a card-carrying member of the Avengers is an adventure, but it's not all fun and games for New York City's main Spider-MAN! What happened in the eight month gap? It all starts in SPIDER-MAN #1! Rated T Cover price $3.99. 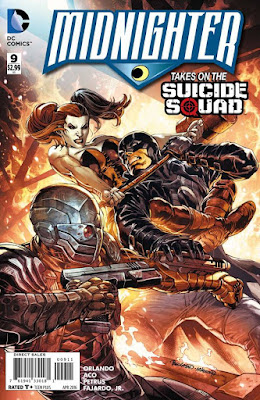 Written by Steve Orlando. Art and Cover by Aco. Spyral wants the deadly Perdition Pistol back-so they turn to the only man who stands a chance of recovering it: Midnighter! The only problem is who has possession of it now...the near-unbeatable Suicide Squad! Cover price $2.99. 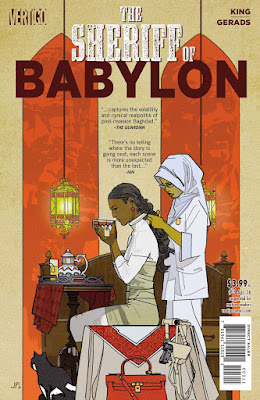 Written by Tom King. Art by Mitch Gerads. Cover by John Paul Leon. The epic, brutal crime tale continues. In the power vacuum left after the American invasion of Iraq, no one is safe. Christopher, Sofia, and Nassir attempt to navigate this dangerous landscape to find the story behind a mysterious dead body. But as they get closer to the truth, and to each other, the bombs start to fall. Cover price $3.99. 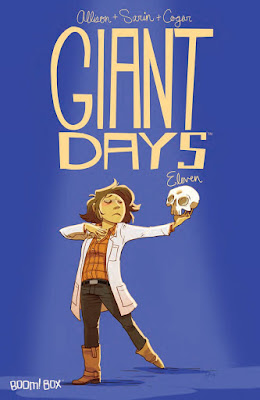 Written by John Allison. Art by Max Sarin. Cover by Lissa Treiman. Now an ongoing series! It's Susan's birthday and she receives the greatest gift at all: it's time for the medical students to start cutting up cadavers. Cover price $3.99. 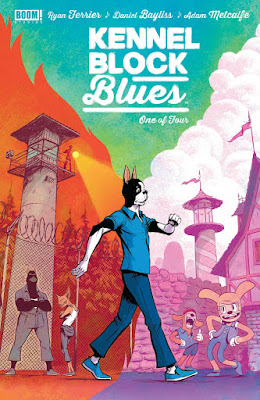 Written by Ryan Ferrier. Art and Cover by Daniel Bayliss. Oliver is a good dog. A family dog. But without warning, he's sentenced to Jackson Kennel, where he's instantly placed on Death Row with the rest of his fellow inmates, awaiting a lethal appointment on The Table if salvation doesn't come. He'll need help escaping the Kennel, but when the stress of prison life builds, he starts escaping reality instead, imagining a fantasy world of cartoon friends. It's time to break out...into a musical number? Cover price $3.99. 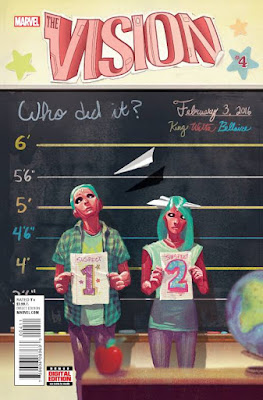 Written by Tom King. Art by Gabriel Hernandez Walta. Cover by Mike Del Mundo. Just as everything is coming together, everything goes to hell. After finally finding love for The Vision, Virginia must respond to the one person who threatens that love - and her response will shock the Marvel Universe. A not-to-be-missed ending that builds to next issue's breathtaking climax. Rated T+ Cover price $3.99. 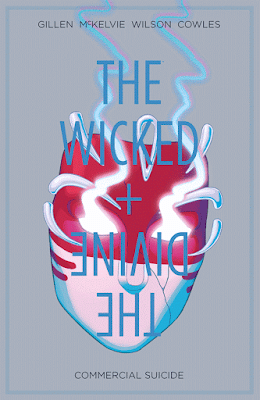 Volume 3 - 1st printing. "Commercial Suicide!" Collects Wicked and the Divine (2014) #12-17. Written by Kieron Gillen. Art and cover by Jamie McKelvie and Matthew Wilson. After the detonation of FANDEMONIUM the gods-as-pop-stars of THE WICKED + THE DIVINE try living in the long dark shadow. Team WicDiv are joined by a stellar cast of guest artists to put the spotlight on each of the gods. The multiple Eisner Award nominated series continues in the only way it knows how: darker, weirder, faster. Don't worry. It's going to be okay. Softcover, 192 pages, full color. Cover price $14.99. 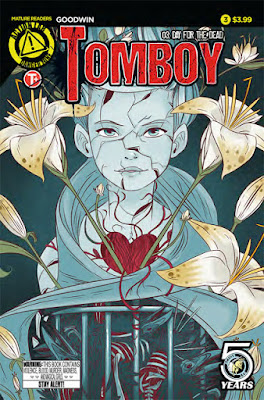 Story, Art and Cover by Mia Goodwin. Double funerals and double lives! Issue 3 of Tomboy reveals Anthony's secret past and Addison's murderous future, while Detective Tico is getting closer to the true identity of the Halloween Killer. Cover price $3.99. 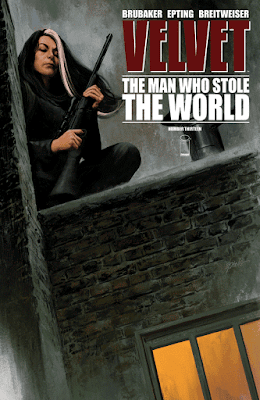 Written by Ed Brubaker. Art and Cover by Steve Epting and Elizabeth Breitweiser. Velvet's answers begin falling into place, and everything is much worse than she ever thought it would be! Cover price $3.50. Written by Markisan Naso. Art and Cover by Jason Muhr. JURASSIC PARK MEETS TOP CHEF! Haunted by the death of his sister, Chef Nate Willner has lost his desire to cook. Forced to move back to his hometown in Utah and work at a coffee shop, Nate's life is quickly becoming a dead end. But when he unexpectedly inherits a time travel suit that takes him to the age of dinosaurs, Nate's passion for cooking is reignited! Extra-Sized Debut Issue! 40 Delicious Pages! Cover price $4.99.