New comic book day has arrived and with it a long list of notable titles ready for the taking. It's mostly ongoing titles that head our list - Saga, Postal, Nowhere Men, Stayer, Faith, Hellcat, Grayson, Cyborg, and others. All great reads for whatever your taste. Check out Wynonna Earp #1 by Beau Smith and Lora Innes from IDW. The Dark Knight III: The Master Race continues and don't sleep on Action Lab's fun Vampblade book. Take a look at this week's recommendations and hit play on our slideshow and enjoy the music. Happy reading! 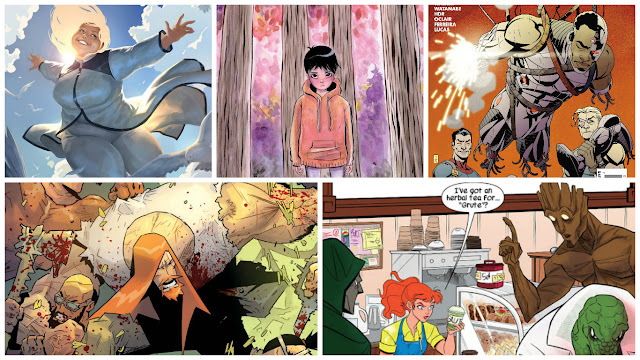 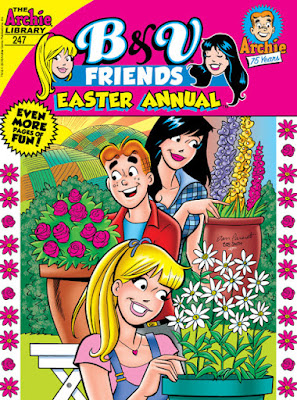 Written by Angelo Decesare. Art by Dan Parent. Cover by Bob Smith and Fernando Ruiz. Betty and Veronica just can't agree who has the more difficult life. Betty says that her financial status means she has to work extra hard, while Ronnie says that her parents put a lot of pressure on her to measure up to the Lodge family name. There's only one way to settle this argument: by trading places for a day! When the girls have to walk in each other's shoes, what will they learn about their BFF - and themselves? Find out in "Room for Improvement," the brand new lead story to this comics annual featuring even more pages of fun! Cover price $5.99. 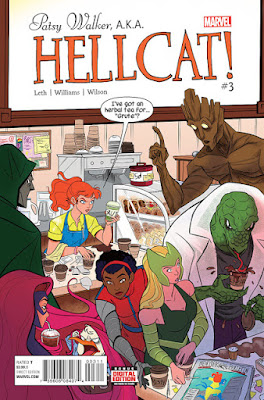 Written by Kate Leth. Art and Cover by Brittney Williams. Hellcat and her pals deal with the true scourge of New York City: BEDBUGS. Plus, Patsy gets another job and tries online dating. Which of these horrors is worst?! Find out in the most third issue so far of Patsy Walker, A.K.A. HELLCAT! Rated T Cover price $3.99. 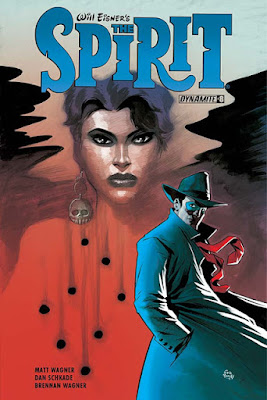 Written by Matt Wagner. Art by Dan Schkade. Cover by Eric Powell. The Spirit and his comrades continue their search to uncover the secrets of the mysterious and deadly Mikado Vaas. Our blue-masked hero's quest brings him into contact with an equally secretive and capable character from his past as well as a fellow (and rather unexpected) crusader for justice on the Central City streets. Weatherby Palmer's desire to unseat Commissioner Dolan runs into a certain immovable object… leading to a far more sinister resolve. Cover price $3.99. 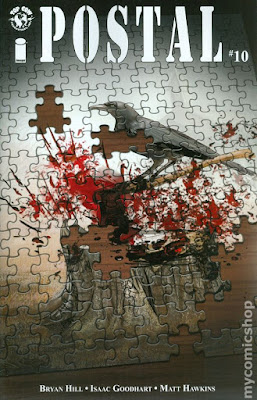 Written by Bryan Edward Hill. Art by Isaac Goodhart. Cover by Linda Sejic. With Eden on the brink of self-destruction, Mark and his mother put aside their differences to stop the internal and external forces seeking to tear Eden apart. Cover price $3.99. 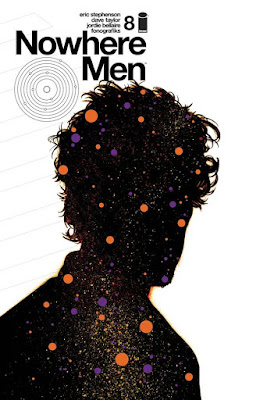 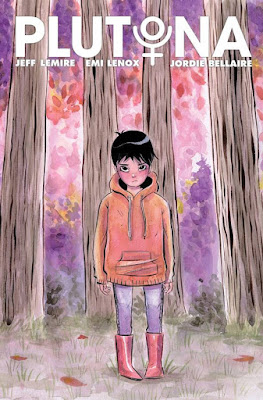 Written by Jeff Lemire and Emi Lenox. Art by Emi Lenox and Jeff Lemire. Cover by Emi Lenox. Mie begins to suspect that one of her friends may have broken their pact to keep Plutona's body a secret, but nothing can prepare her for what she finds next. Cover price $2.99. 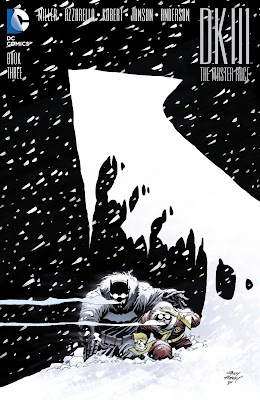 Written by Frank Miller and Brian Azzarello. Art by Andy Kubert and John Romita Jr. Cover by Andy Kubert and Klaus Janson. The hardest thing for Batman is to admit his greatest strength: He's just one man, and sometimes he needs help. With so much at stake, will he turn to help of the Super variety? Cover price $5.99. 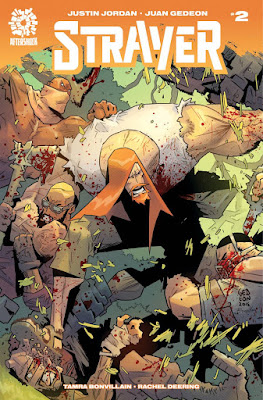 Written by Justin Jordan. Art and Cover by Juan Gedeon. Strayer and Mala discover that on the road, bandits are a huge problem. Not quite as big a problem as four-armed tiger-monkey demons. But still…. Cover price $3.99. 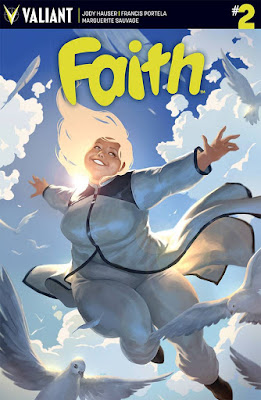 Written by Jody Houser. Art by Francis Portela and Marguerite Sauvage. Cover by Jelena Kevic-Djurdjevic. The most talked-about new book of 2016 is just getting started! Just as she uncovers a conspiracy in the Hollywood Hills that threatens the lives of her fellow psiots and new friends alike, Faith must also deal with the return of her ex-boyfriend and one-time teammate Torque…and a volatile new alien threat that nobody saw coming! Cover price $3.99. 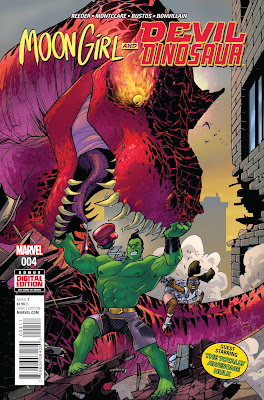 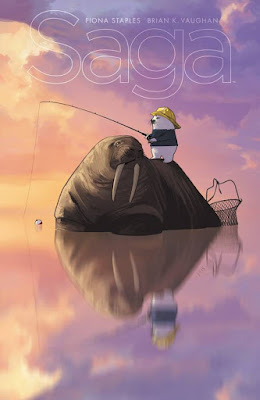 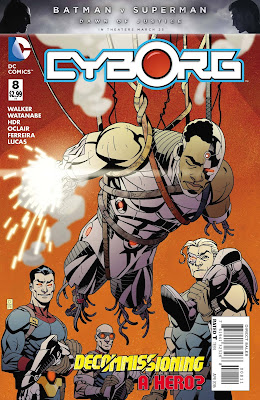 Written by David Walker. Cover by Ethan Van Sciver. Following the Technosapien invasion, the government implements greater regulation on cybernetics. Their first step is determining ownership of the cybernetics implanted in Vic Stone, setting up a major conflict when it is decided that Vic is actually property of the government. And when he refuses to comply, a warrant is issued for his arrest-and Vic Stone becomes a hunted man! Cover price $2.99. 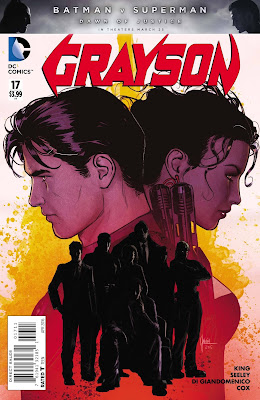 Written by Tim Seeley and Tom King. Art Carmine di Giandomenico. Cover by Mikel Janin. Agent 37 has run out of allies to turn to in his fight against Spyral. His only choice is to go even deeper into the shadows and recruit a team of spies that will help him challenge the monster that Spyral has become since his former friends Tiger and Helena took over the organization. Cover price $3.99. 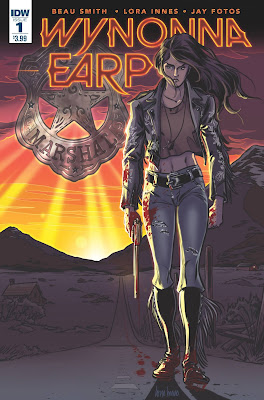 Written by Beau Smith. Art and Cover by Lora Innes. The US Marshals Black Badge division has been fighting back against supernatural threats for decades. But even the toughest werewolf, most bloodthirsty vampire, or grisliest zombie knows there's one agent to avoid at all cost: Wynonna Earp. Descended from the legendary Wyatt Earp, Wynonna is dead set on bringing the unnatural to justice! Cover price $3.99. 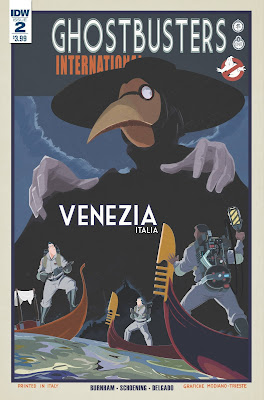 Written by Erik Burnham. Art and Cover by Dan Schoening. 'BENVENUTI A VENEZIA.' Pack your bags! The Ghostbusters head to Venice, Italy, intending to investigate the haunted island of Poveglia, whose spirits are unusually agitated at this time... and on top of it all, Winston is beginning to get a bad feeling about the client that has sent the boys in gray to Europe. Cover price $3.99. 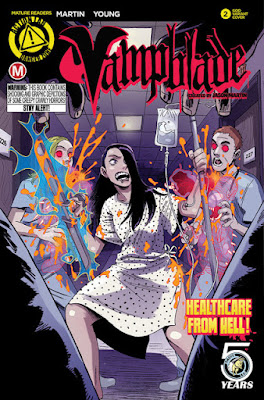 Written by Jason Martin. Art and Cover by Winston Young. After transforming into the Vampblade and having her first encounter with the disgusting other-dimensional 'space vampires', Katie Karver winds up in the hospital. But now that she's connected to the mystical blades there's no place to hide from the vile otherworldly parasites that are drawn to them. Time to check out and kick ass! Cover price $3.99.