The CW's 'Riverdale' Casts Josie and a Non-Ginger Archie 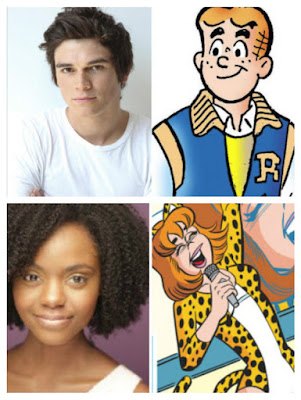 KJ Apa will play America's favorite teen in The CW's live-action "Riverdale" TV series, joining Ashleigh Murray as talented musician Josie McCoy. The news comes hot on the heels of other major casting news for the pilot, including the naming of Cole Sprouse (The Sweet Life of Zack and Cody) as Jughead Jones, Lili Reinhart (Surviving Jack) as Betty Cooper, and Luke Perry (Beverly Hills, 90210) as Fred Andrews.

In the exclusive announcement, Deadline described Apa's Archie as "an intense, conflicted teen, a boyish high school sophomore who got pumped up over the summer working construction and is now juggling the interest of several girls, as well as trying to balance his passion for writing and performing music — against the wishes of his father and his football coach."

Murray’s Josie is described as "a gorgeous, snooty and ambitious girl who is the lead singer for popular band Josie and the Pussycats. She has zero interest in recording any songs written by fellow teen Archie."

The one-hour drama will be written by Archie Comics Chief Creative Officer Roberto Aguirre-Sacasa and produced by Warner Brothers Studios and Berlanti Productions and has been described as a subversive take on the classic Archie mythos. Greg Berlanti, Sarah Schecter, Jon Goldwater, and Roberto Aguirre-Sacasa serve as executive producers.

The live-action series offers a bold, subversive take on Archie, Betty, Veronica, and their friends, exploring small-town life and the darkness and weirdness bubbling beneath Riverdale’s wholesome facade. The show will focus on the eternal love triangle of Archie Andrews, girl-next-door Betty Cooper, and rich socialite Veronica Lodge, and will include the entire cast of characters from the comic books—including Archie’s rival, Reggie Mantle, and his slacker best friend, Jughead Jones.

Popular gay character Kevin Keller will also play a pivotal role. In addition to the core cast, “Riverdale” will introduce other characters from Archie Comics’ expansive library, including Josie and the Pussycats.