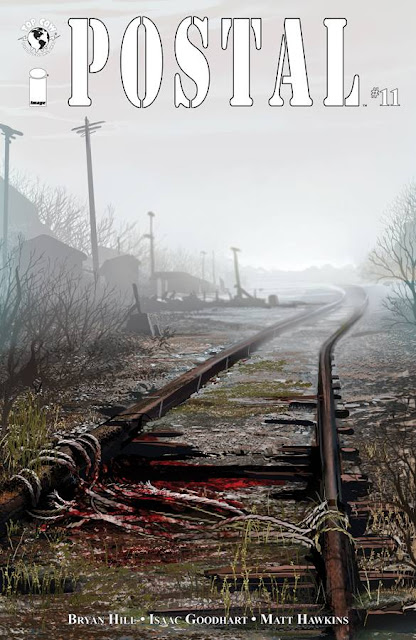 Reading the latest 'Postal' from Bryan Hill and Isaac Goodhart is a lot like watching the latest addictive television series. "Breaking Bad","The Sopranos," and "Mad Men," all had a way of drawing you in, keeping you involved and wanting more. Such is the case with issue eleven where Molly begins to dig her claws deeper into Eden and Mark as well.

After leaving the unsuspecting Maggie half dead, Molly has her sights squarely on Mark. The young beautiful sociopath is a cold-blooded killer with the protection of a reluctant mayor and the privilege of being the FBI director's daughter. Hill has been able to create another great character that serves as a counter-balance to the earnest Mark and a rival to his conniving mom Laura.

There isn't a lot of action in the issue but the fireworks come from a chilling conversation Molly has with Mark in the diner. She lays out her cards on the table making him an offer he can't refuse. Mark is one of the most riveting characters in comics and such a stunning portrayal of Asperger syndrome. Any perceived deficiencies of his condition are really his strengths. He's stoic and cool but blunt,"That is hate on my face.” It's a turning point in this arc that sets the stakes for all the characters involved.

Seeing Goodhart grow in confidence with mastery of his pencils has been one of the benefits of following the series from the beginning. Crisper, cleaner, and more dynamic lines are throughout the issue. His facial expressions and attention to detail has shown marked improvement. More importantly, and it's explained in the after notes by Goodhart, his setting of scenes that convey an accompanying tone to underline the character's mood makes him a storyteller in his own right. Betsy Gonia continues to color 'Postal' using a distinctive palette that gives it own special look.

'Postal' is a special book that continues to evolve and grow while maintaining a degree of intrigue, danger, and uneasiness. Especially, in this arc where Hill and Goodhart have been flawless. Molly is a charming monster and things are likely to come to a head soon. You can't binge watch this thriller but you'll be dying to know what happens next.