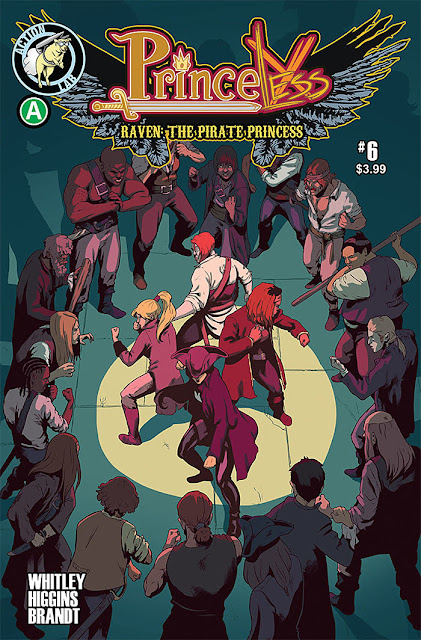 Raven and her all-woman crew survive each other long enough on their sea voyage to make a stop at a hidden seaport.  A port that was established with the help from Raven's great, great, great grandmother. A great place to replenish supplies and gather some information about her brothers. At least, that was the intent.

The large ensemble starts to take shape as the crew is divided into groups before hitting the village. Team Raven heads out looking for a lead, Team Ximena helps Jayla acquire all that she needs from an apothecary, Team Katie for other supplies, and Team Sunshine stays behind on the ship to train the newbies how to be pirates. Lesson number one: the art of pick-pocketing.

An amusing set of situations occurs with each group; a frustrated shopkeeper assumes something stereotypical, rude elderly ladies are rude, the many forms of rope are explained, and shady information merchants sound like they're making it up. Whitley juggles this large cast of characters with great pacing and giving each group a chance to contribute to the issue. What ties them together comes across at the end with a cliffhanger that affects all of them.

Rosy Higgins continues to do great work in character designs providing plenty of expressions, eye-rolling, head-shaking, incredulous looks, you name it, it's all in issue fifteen. William Blankenship keeps the earthy tones while on the island, plenty of browns, purples and some greens. It's the signature look of 'Raven' you'd come to expect.

'Princeless: Raven the Pirate Princess' #6 feels less restrained on the island than while at sea. The various characters get to have something more to do before things went awry. The crew's personalities have started to get fleshed out leading to some amusing scenes. It all works to build up to the ending that should make the next issue a lot more exciting.