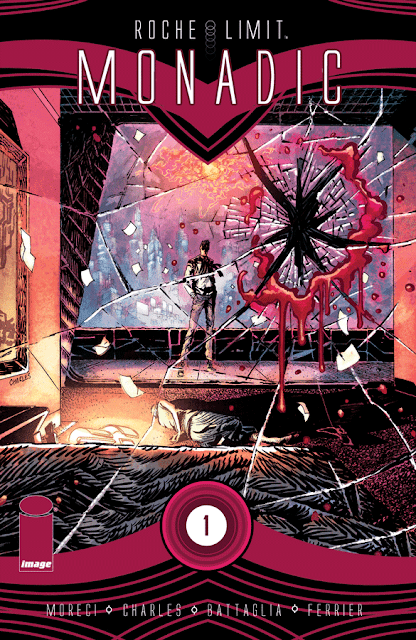 Alex Ford is a wanted man. He may or may not have killed someone. Either way, he's being guided by mysterious forces, manifesting in a familiar face. He's a man on a mission but the authorities and friends of the deceased want answers. Meanwhile, Sasha is back and making the most of her surroundings. She's given some new information from a mysterious stranger that changes everything.

There's a lot going on in Roche Limit: Monadic #1 we just don't why. Nevertheless, the mystery sucks you in and the need for answers grows but get more questions instead. It's just the type of risk-taking you'd expect from writer Michael Moreci. Always ready to challenge the reader, piquing interest without showing his hand, all the while setting up an unexpected reveal down the line. Moreci is daring you to jump on a freight train, extending his hand to help you onboard as it barrels down the track at breakneck speed. 'Monadic' is definitely worth taking that leap of faith.

Artist Kyle Charles also returns from his work on Clandestiny. Instead of bizarre and unique landscapes of a foreign planet, Charles is tasked with a much harder job of bringing this version of earth to life by creating a dense urban environment, dilapidated and dark at times, Charles flexes his artistic muscles with precision and meticulous detail. An ode to Blade Runner and Dark City with a more violent edge that bubbles to the surface on occasion. Matt Battaglia is also back on colors and amid the dark shadows, there is a surprising amount of warm colors that cuts the gritty edge in certain scenes, like the splendor in the observatory, or used sporadically that pop in the grimmer panels.

Moreci and company are back with a defiant series that asks you to take the plunge and dive into their dark and mysterious world. A world where you have to pay attention, invest in these characters' lives, because you're either all-in or you're out. As we've witnessed in the last two arcs the pay-off is worth the journey.