TRAILER: New 'Ghostbusters' Team Up, Get Slimed and Possessed 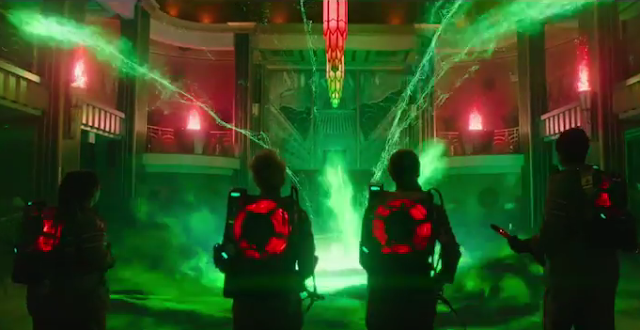 
Ghostbusters makes its long-awaited return, rebooted with a cast of hilarious new characters. Thirty years after the beloved original franchise took the world by storm, director Paul Feig brings his fresh take to the supernatural comedy, joined by some of the funniest actors working today – Melissa McCarthy, Kristen Wiig, Kate McKinnon, Leslie Jones, and Chris Hemsworth. This summer, they’re here to save the world!

Oh, and there's plenty of slime, loads and loads of it. The opening scene in the trailer finds Abby and Erin approaching an apparition, like in the original, in the New York Public Library before spewing a torrent of slime. And yes Slimer is back but the trailer didn't spoil expected cameos from original cast members - Dan Aykroyd, Bill Murray, and Sigourney Weaver.

The premise of the movie is something is amplifying psychic activity in New York resulting into an onslaught of ghosts all over town and the ladies assemble to take down the threat. This time around the apparitions can also possess humans which leads to a funny bit with Patty and Abby.Staying true to the first film we'll see an Ecto-1, a Lower Manhattan headquarters, and proton packs.

Some lucky fans got to see the trailer a day early on the Sony lot with director/writer Paul Feig and co-writer Katie Dippold. Feig emphasized the film was a reboot and not a sequel. There's no passing of the torch but instead an organic story of discovery and invention that feels totally original for the new cast.

The trailer introduces the team quite well, establishing them as smart capable paranormal hunters but not leaning too much on humor just yet with the first trailer. The scope and effects of the film look great and as epic as we'd expect from a summer blockbuster. The movie arrives in theaters on July 15 so there'll be plenty more trailers to come that show more of the film's humor and monsters. So far it looks like fans and skeptics alike should feel at ease with Feig's vision (just don't read the comment sections!).