Watch Netflix's 'Luke Cage' Teaser in All Its Glory 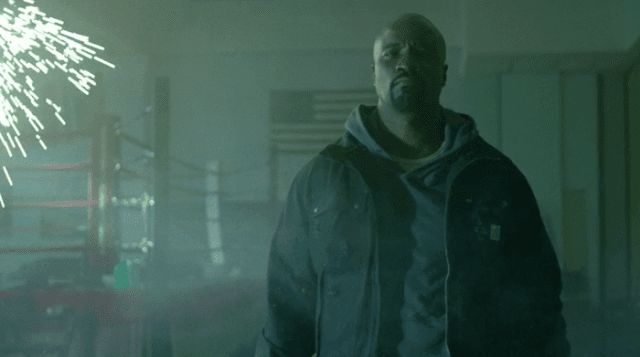 Amid the frenzy of watching the second season of Netflix's 'Daredevil,' fans who gave up sleep, school, or maybe work to binge all 13 episodes on day one were rewarded with a short teaser for 'Luke Cage' that auto-played after the last episode.

The next Marvel hero in the streaming service's line of "street-level" Defenders series has already appeared on 'Jessica Jones' as the sexy love interest played by Mike Colter. The affable level-headed bar owner with the unbreakable skin and super strength served as a great foil for the emotionally damaged Jones.

The simple but effective teaser shows Luke entering a dimly lit boxing gym only to find a couple of armed thugs suddenly shooting at him. Luke, unfazed by the bullets because of his impenetrable skin, calmly says,”I guess you haven't heard about me.” A few bullet holes later,"I'm about sick of always having to buy new clothes."

It hints to a possibly lighter tone than the darker 'Daredevil' and 'Jessica Jones' series. The teaser also ends with some hip hop, Nas's "Made You Look" to be precise, which hopefully is a sign a killer soundtrack is on its way.