When it was announced that Elizabeth Banks would be the main baddie, Rita Repulsa, of the upcoming Power Rangers film adaptation everyone wondered if she'd rock the iconic elaborate head designs of the campy 90's television series. Sadly, the answer is no but Banks looks every bit as evil with a sleeker modern look. 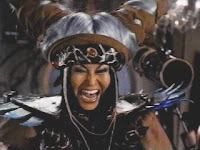 “It’s definitely a modern and edgy re-imagining of the original Rita Repulsa,” Banks tells PEOPLE. “We wanted to give her a backstory that connects her to the new Rangers.”

She'll be seeking world domination in futuristic Poison Ivy-looking attire with gold accents on top of green hair and costume, unleashing hellish monsters that only a band of colorful teens can save us from. The titular heroes are played by  Naomi Scott, Becky Gomez, RJ Cyler, Dacre Montgomery and Ludi Lin. Dean Israelite directs.

Power Rangers will be out on March 24 next year.