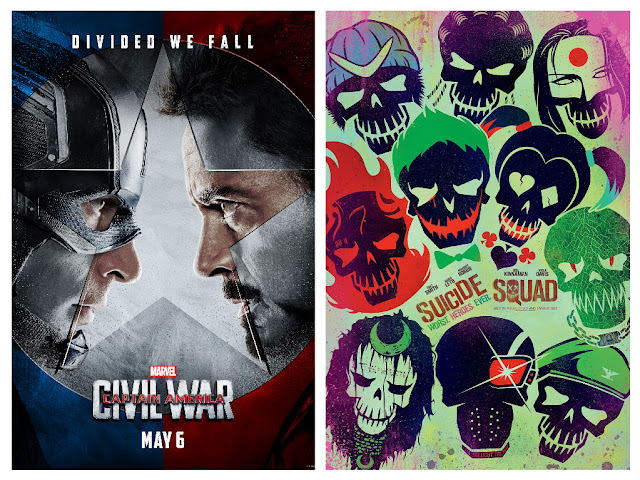 Amid the wild shenanigans during the 25th MTV Movie Awards, two highly anticipated comic book movies premiered new previews. The first was an exciting wall-to-wall action clip from Marvel's 'Captain America: Civil War.' The other was Warner Bros' new trailer for 'Suicide Squad' with new footage and if you're skittish don't worry it looked like fun.Take a look.

Chris Evans aka Captain America himself was in attendance to introduce the new clip. It features Cap, The Falcon (Anthony Mackie), and Scarlett Witch (Elizabeth Olson) infiltrating an enemy stronghold and wiping out each baddie with flair. Crossbones looks especially formidable with some impressive armor in a brief appearance. Looks like critics from the early screening were spot-on about the epic action in 'Captain America: Civil War' coming to theaters on May 5, 2016.


Set to Lesley Gore's "You Don't Own Me" and Sweet's "Ballroom Blitz" the new 'Suicide Squad' trailer asks the question, “What if Superman had decided to fly down...grab the President out of the Oval office? Who would have stopped him?” To which Amanda Waller (Viola Davis) offers up a "team of bad people who...can do some good."

With reports of reshoots recently to supposedly "lighten the mood" this teaser shows plenty of good-natured dialogue between the team. Skeptics who have complained about the dark and unpleasant tone of 'Batman V Superman' and are weary about 'Suicide Squad' probably don't have anything to worry about. So far it looks "fun" aplenty.