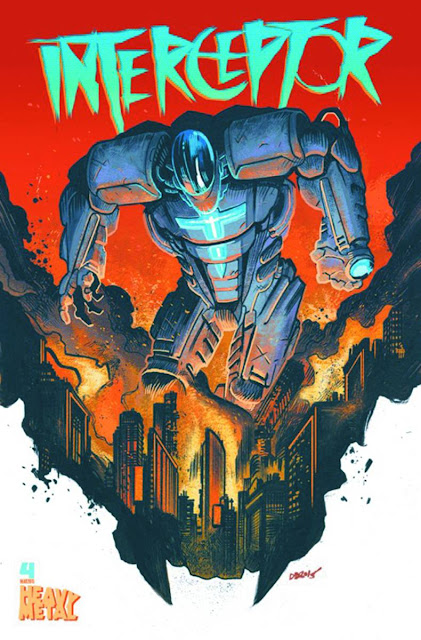 Poli goes on a rampage in her mech suit trying to vanquish the vampire city of New Wallachia once and for all. This issue is a non-stop action bonanza of destruction that could put an end to any threat to earth's survivors back on Palus. Will it come at the price of her own safety?

Donny Cates takes a different approach in issue four of 'Interceptor' where the narration is Poli's verbal recording, presumably her first and last status report to Palus, while she lays waste to the city. It's a clever way to handle the exposition in a way that makes sense without weighing down the story. Admittedly, it's panel after panel of Poli blasting her way to get to Matilda, the vampire queen, but as usual Dylan Burnett and Dee Cunniffe put together a fluid and eye-popping display of art along the way.

There is some great subversive messaging about humanity's tendency to go to war over land even if innocents suffer. Cates isn't afraid to provide subtext in his stories, sometimes with a wink or a subtle jab to downright an indictment of the abuses of the powerful. 'Interceptor' isn't so fictionalized that we couldn't see a governing body decide who stays on a dying planet or who lives. Or a government preemptively starting a war before the "enemy" can strike. The speed and execution of Cates' dialogue and action doesn't allow for the messages to appear heavy-handed at all. It's still an exciting and electric sci-fi adventure.

With such an action-laden issue it's a feast for the eyes as Burnett goes to town with massive sequences of destruction in splash pages to smaller panels of explosive precision. It all comes together with Cunniffe's dark bold colors in the sky, in the buildings, in Matilda's lair, and a lot of bloody reds. All of this is strikingly cut with bright explosions of whites and blues. The art team basically cuts loose and shows off their wares in spectacular fashion.

In this penultimate issue of the 'Interceptor' mini, what starts as a single-minded venture takes a sharp turn by the end. After an pulse-pounding march to Matilda everything changes leaving the reader gassed but demanding more answers. This all adds up to a magnificant prelude to next month's conclusion. Get on this if you haven't and binge read it now.
Email Post
Labels: comic books Dee Cunniffe Donny Cates Dylan Burnett Heavy Metal Interceptor reviews