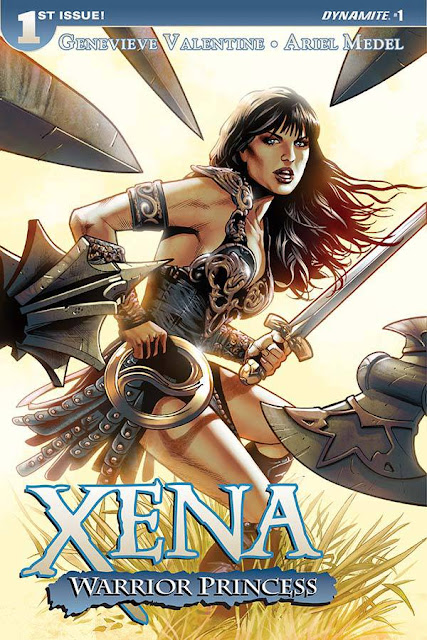 Xena: Warrior Princess was one of the most entertaining fantasy television shows of its era during the turn of the last century. It was fun, campy, and the titular hero and her companion kicked all kinds of ass. When Dynamite announced it was bringing Xena to comics it sparked a lot of fan excitement. Unfortunately, the first issue by Genevieve Valentine and Ariel Medel is a bit of a jumbled mess with good bones to flesh out a potential fun series going forward.

Surprisingly, Valentine struggles to find a cohesive narrative as the story flips back and forth from the present to the past. Trying to do justice to a fan favorite pop culture character like Xena and also introduce her to new audiences is an extremely difficult task. Issue one doesn't establish Xena beyond what longtime fans expect of her. She's smart, strong, kind, and loyal but doesn't stand out enough at this point to attract new readers. Over time, the next issue hopefully, Xena can transcend her witty personality and superior warrior skills into a pull-worthy title.

Ariel Medel's pencil work seemed to improve as the issue went on, looking cleaner and more distinctive by the end. Xena and Gabrielle have a slight resemblance to their former live-action counterparts but stand on their own. Nanjan Jamberi enlivens the page with bold color schemes that give the book the energy lacking in the script.

'Xena: Warrior Princess' #1 unfortunately, disappoints to thrill but does have the potential to become more engaging with a more straight forward approach in the next issue. The disjointed storytelling makes it hard to grasp what's going on or why we should care about Xena and Gabrielle. Valentine has done better work and I expect she'll recover her stride in the issues to follow. I'm cautiously optimistic.
Email Post
Labels: Ariel Medel comic books Dynamite Comics Genevieve Valentine reviews Xena