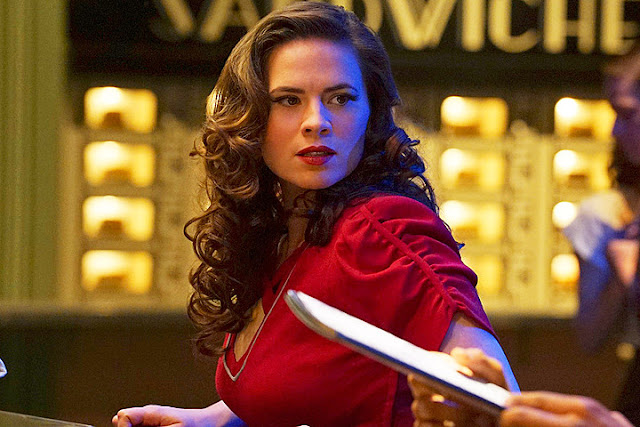 It was a bad news/good news kind of day for actress Hayley Atwell. Her fan favorite but low-rated Marvel series 'Agent Carter' was cancelled after two seasons but has landed another ABC series in the drama 'Conviction.'

Variety describes the upcoming series for the 2016-2017 season is described as the following:

In “Conviction,” Atwell stars as a lawyer and the former First Daughter Hayes Morrison, who is about to accept a job offered from her sexy nemesis, NY District Attorney Wayne Wallis (Eddie Cahill), to avoid jail time for cocaine possession and avoid hurting her mother’s Senate campaign. Working with his team at the new Conviction Integrity Unit will let her use her brilliant mind to turn over cases where there is credible suspicion of wrongful conviction, and give her a chance to turn things around with her high-powered political family.

It's a far cry from the determined and capable agent of the SSR who overcame the sexist office politics of the 1940s to show her mettle and wits in 'Agent Carter.' The show was the fill-in for 'Agents of SHIELD' while on hiatus and it gave Marvel an intelligent and kickass leading female character on broadcast television. However, it never satisfied ABC ratings-wise as it averaged a 1.4 rating in adults 18-49 and 4.4 million viewers overall in "live plus-7" estimates from Nielsen, down sharply from its first year.

The absense of 'Agent Carter' leaves the CW's newly acquired 'Supergirl' and Netflix's 'Jessica Jones' as the only comic book-based shows with female leads. Fans' reaction online has been one of disappointment and devastation. Peggy Carter was a source of inspiration and excitement. While Marvel refuses to make a solo movie by an equally capable kickass heroine like Black Widow, Peggy filled that role in some way on television. And Atwell's portrayal was one of dignity, class, and confidence.

On a side note, ABC's ill-conceived and seemingly derivative 'Agents of SHIELD' spin-off 'Marvel's Most Wanted' starring the adventures of Bobbi Morse/Mockingbird (Adrianne Palicki) and Lance Hunter (Nick Blood) that was planned for next season has been scrapped altogether. Presumably they'll return to the ranks of 'SHIELD' in the fall.