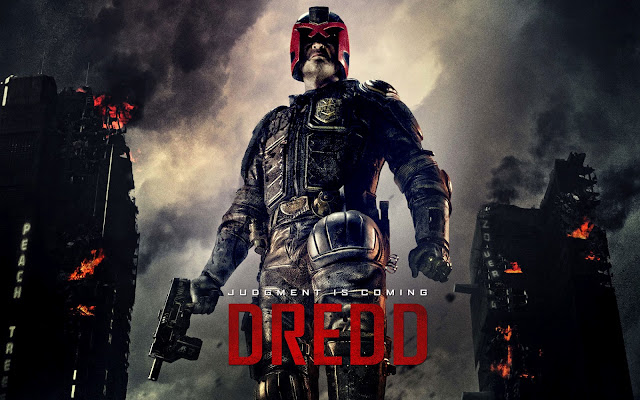 In 2012 Karl Urban (Star Trek, Almost Human) starred in the comic book adaptation 'Dredd.' Despite being well received by action fans and critics it tanked at the box office. Its loyal fanbase has made it a cult classic and after years of rumors concerning a sequel it may finally find a home on a streaming network according to its star.

Fans are so passionate about seeing Judge Dredd again they've started an online petition to get the attention of Amazon Prime, Netflix, HBO, or any studio to produce a sequel or television series. The petition is at about 145,000 signatures and growing. Urban's comment at the Calgary Comic & Entertainment Expo that "conversations are happening" with one of the streaming services is a welcomed sign and would fit perfectly among comic book fare already being produced. However, Dredd isn't like your typical comic book fare.

With a "Certified Fresh" Rotten Tomatoes score in the 70s from critics and audiences, 'Dredd' certainly proved to be a quality film that just went under the radar and highly underrated by general audiences. Starring Urban, Olivia Thirlby (Juno, The Wedding Ringer) as his young partner, and an awesome villainous turn by Lena Heady (Game of Thrones, The Purge) 'Dredd' was able to stay true to its gritty comic roots while invoking a 1980's-style action movie with a relentless amount of violence, dry humor, and self-satire.

This might be the last gasp for a live-action feature of some kind as its been rumored before to no avail. It did so surprisingly awful at the box office ($35 million worldwide/$50M budget) it made Sylvester Stallone's 1995 corny predecessor "Judge Dredd" ($113M/$90M) look like 'Avatar.' Still, 'Dredd' has a few things going for it. A passionate star willing to don the helmet and frown again, a loyal fanbase, new creative outlets where the budgets and risk are lower but the reach is greater than before. It's a binge-worthy sci-fi action bonanza just waiting to happen.

The future America is an irradiated waste land. On its East Coast, running from Boston to Washington DC, lies Mega City One – a vast, violent metropolis where criminals rule the chaotic streets. The only force of order lies with the urban cops called “Judges” who possess the combined powers of judge, jury and instant executioner. Known and feared throughout the city, Dredd (Karl Urban) is the ultimate Judge, challenged with ridding the city of its latest scourge – a dangerous drug epidemic that has users of “Slo-Mo” experiencing reality at a fraction of its normal speed.

During a routine day on the job, Dredd is assigned to train and evaluate Cassandra Anderson (Olivia Thirlby), a rookie with powerful psychic abilities thanks to a genetic mutation. A heinous crime calls them to a neighborhood where fellow Judges rarely dare to venture – a 200 story vertical slum controlled by prostitute turned drug lord Ma-Ma (Lena Headey) and her ruthless clan. When they capture one of the clan’s inner circle, Ma-Ma overtakes the compound’s control center and wages a dirty, vicious war against the Judges that proves she will stop at nothing to protect her empire. With the body count climbing and no way out, Dredd and Anderson must confront the odds and engage in the relentless battle for their survival.