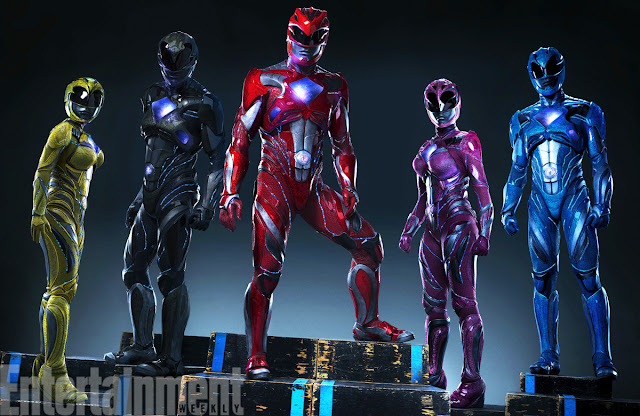 The risk of launching an updated adaptation of classic pop culture properties from the past are the unpredictable ways they'll be reimagined. The latest fan favorite to emerge from 90's television to the big screen next year is Lionsgate's Power Rangers. Gone are the colorful Lycra suits and now say hello to the much darker and alien tech complete with boob armor and wedges.

The five Power Rangers, Ludi Lin (Black), Naomi Scott (Pink), RJ Cyler (Blue), Becky G. (Yellow) and Dacre Montgomery (Red), have what Entertainment Weekly calls "translucent extraterrestrial armor that crystallizes around their bodies."Director Dean Israelite (Project Almanac) says "These suits needed to feel like they were catalyzed by these kids and their energy, their spirit."


"It’s tricky finding a new language for a superhero costume,"

production designer Andrew Menzies tells EW. "Ours is an alien costume that grows on them, that’s not man-made." He goes on to say the suits needed to feel more advanced than their predecessors for a more sophisticated audience and appeal to new fans.

Naturally, the Internet has voiced their opinion and it remains rather mixed. It's a little jarring considering the vast difference in appearance especially the women's suit. Looking as if designed by Tony Stark himself, the suits look more space-age and alien but also look like leftovers from Iron Man 3. There's no reason to have boob armor and heeled shoes for the women but practicality was not part of the design apparently.

Anyway, what do you think? Do you like the redesign or is it a complete garbage fire? Let us know in the comments.