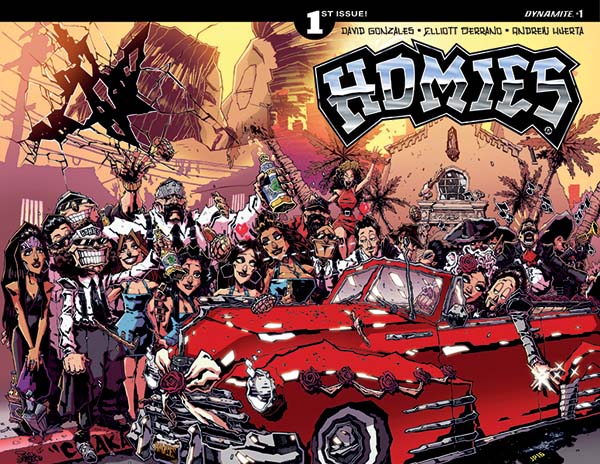 The cultural phenomenon that swept the nation in the 90's is back, and for the first time ever, Homies are coming to the comic shop! Dynamite Entertainment proudly presents the comic book adventures of Hollywood, Big Loco, Smiley, Gata, and the rest of the Homies cast, courtesy of all-new stories by Homies creator David Gonzales, Elliott Serrano, and Andrew Huerta. The October 2016 comic book debut precedes the widely-anticipated November release of Homies: A David Gonzales Retrospective, a 280-page art book chronicling the turbulent times, remarkable artistry, and youthful street culture of a pop culture phenomenon. 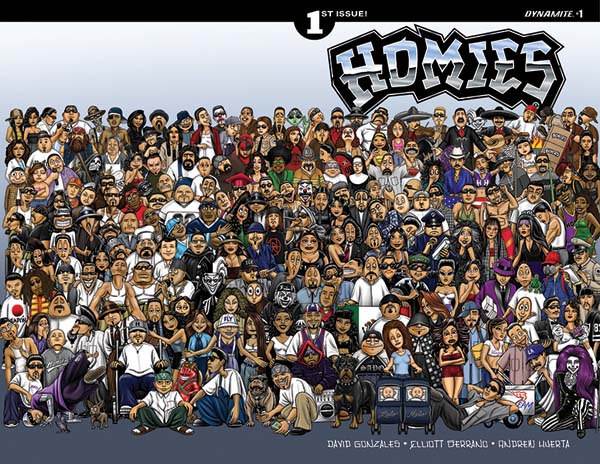 Set in the fictional "Barrío Quién Sabe", the Homies comic book series features the long-awaited wedding of Hollywood and Gata. It's been a day that she has imagined for her entire life, but now Gata has to deal with everyone trying to ruin it! What will she do when she hears the whispers about Hollywood and his womanizing ways? Will the wedding still take place when everything that can go wrong actually does? Is Hollywood destined to be a bachelor for life, or will Gata finally get him to settle down? It's a day that will be full of love, laughs, and possibly heartbreak! 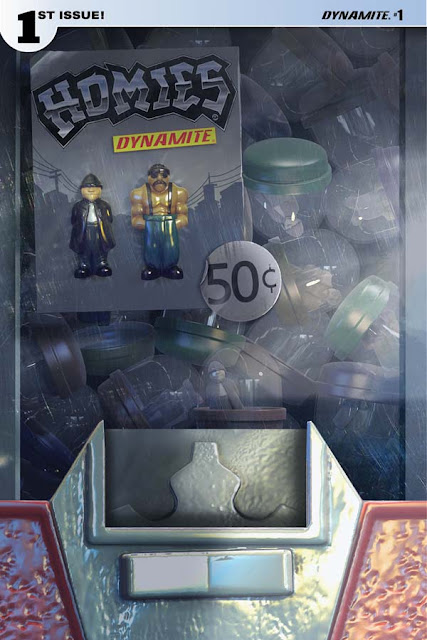 Co-written by original Homies creator David Gonzales and Grumpy Cat writer Elliott Serrano, the series features stunning artwork from rising star artist Andrew Huerta (Sovereign, Pathfinder). Together, they bring the world of the Homies to life as never seen before! 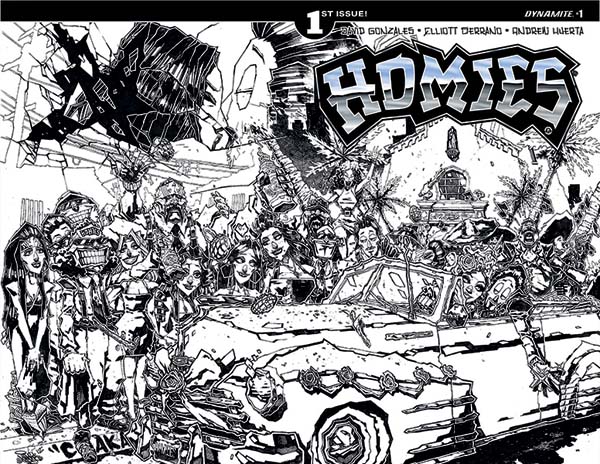 "It's hard to share the total creative workload of Homies with other artists, but I am really stoked about the job turned in by Andrew and Elliott," says David Gonzales. "Elliott shows an intimate understanding of the world I've created, and Andrew blows my mind with his artistic renditions of my Homies. He's taken them back to the edgy, urban, graffiti-influenced period they were born in, in a style that I have immediately became a fan of." 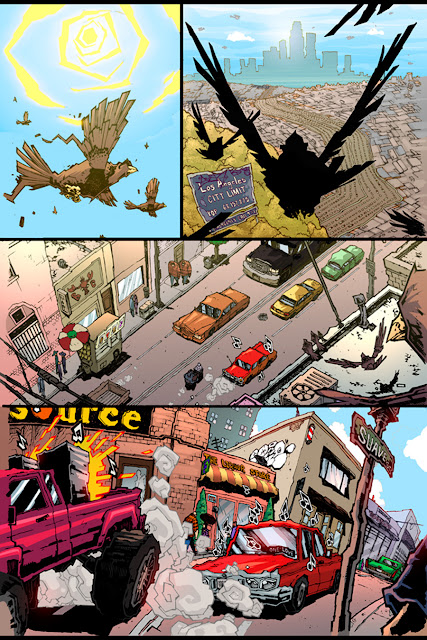 "I remember getting the toys at my local carnicería when I was a kid, and I jumped at the chance to work on the comic," says co-writer Elliott Serrano. "When I pitched story ideas to David, he liked the idea of a wedding where everything goes wrong, and immediately knew who the two characters getting married should be! We want the book to be full of humor, heart, and colorful characters, and I don't mind saying that the work that I've seen Andrew do has really blown me away!" 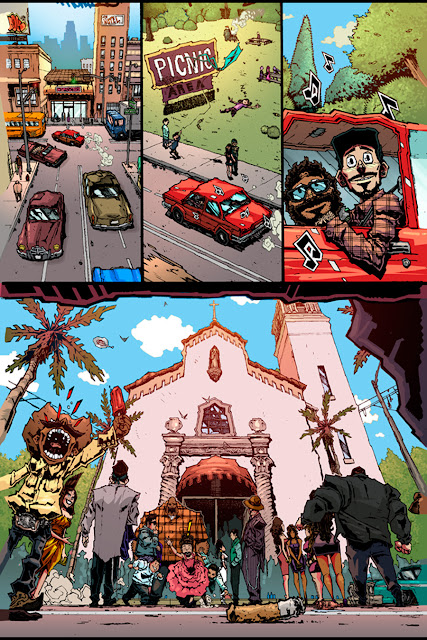 "Everything about this project is dope. I've been a fan of the Homies since high school," says series artist Andrew Huerta. "When I found out I was the artist to bring the Homies to life, I was happy to be a part of a Chicano comic." 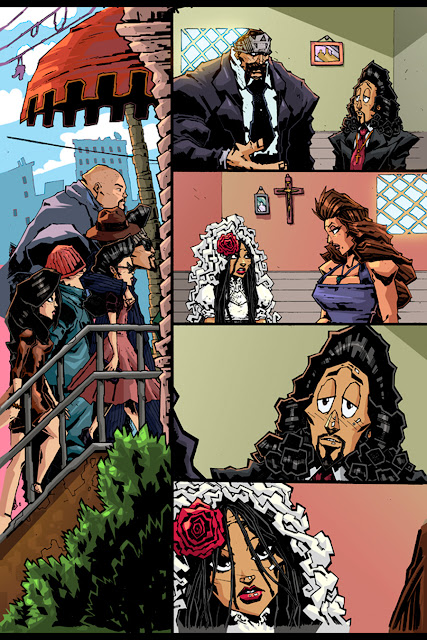 "We decided it would be a good idea to do wraparound covers on this series, so we could fit as many Homies in as possible of course… but when our cover by Andrew Huerta came in, it just floored everyone," says editor Rich Young. "Andrew is a man whose love for the Homies comes through in every page and panel, and is the perfect fit to draw this comic. He brings the heart and soul of David's characters to life in his own fresh and authentic way!" 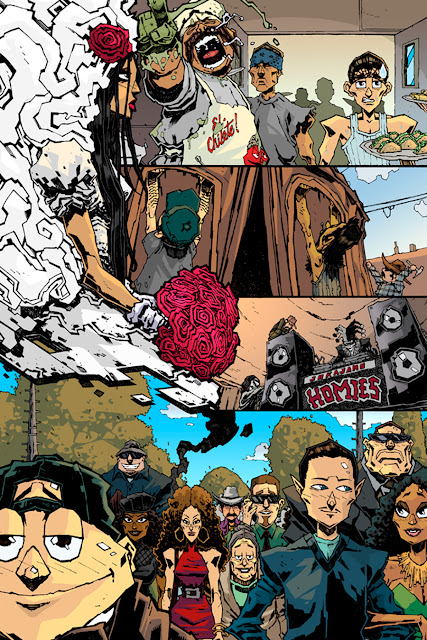 Fans and retailers will be able to choose from three different covers for the debut of Homies: Cover A Wraparound by Andrew Huerta, Cover B Wraparound by David Gonzales, and Cover C "Vending Machine Variant" by Michael Adams. Special covers include a Blank Authentix Edition which aspiring and professional artists can illustrate, and a rare Huerta "Black & White" Wraparound incentive edition only available to qualifying retailers. 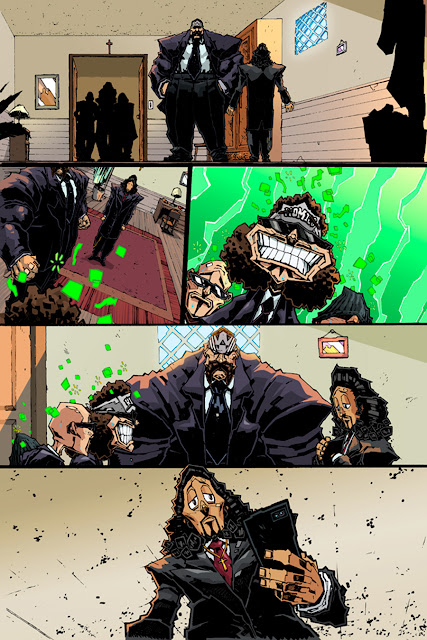 Created by David Gonzales, the Homies first appeared as an underground comic strip that debuted in Lowrider Magazine in 1978, a reflection of his friends and lifestyle. At first a group of tightly knit Chicano buddies from East Los Angeles, the Homies expanded their crew to over 300 characters from all different cultures, genres, and even species. In an inner-city world plagued by poverty and oppression, they formed a strong, binding cultural support system that enabled them to overcome negativity and turn to laughter and good times as an antidote for reality. Homies erupted as a mainstream sensation in 1994 when trend-savvy retailer Hot Topic offered Homies shirts for sale, rapidly becoming popular with the youth market. Following on the heels of a successful T-shirt run, Homies was licensed for figurines in the vending machine toy industry, where all sales records were broken, with over 150 million figurines sold worldwide. The licensing program soon spread to products such as action figures, remote-control and die-cast cars, notebooks, posters, plush, Halloween masks, video games, music, and more, carried by specialty and mass retailers everywhere. 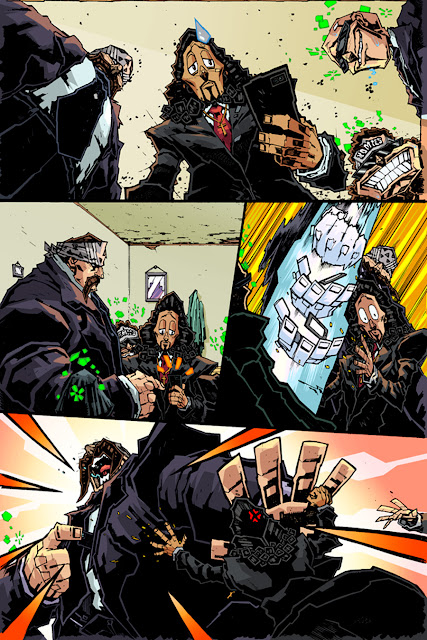 Homies #1 and Homies: A David Gonzales Retrospective will be solicited in Diamond Comic Distributors' August 2016 Previews catalog, the premiere source of merchandise for the comic book specialty market, and slated for release in October and November, respectively. Comic book fans are encouraged to reserve copies with their local comic book retailers. Homies will also be available for individual customer purchase through digital platforms courtesy of Comixology, Dynamite Digital, iVerse, and Dark Horse Digital. 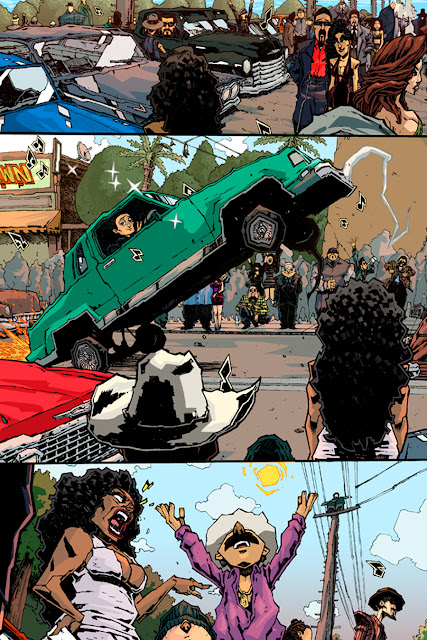