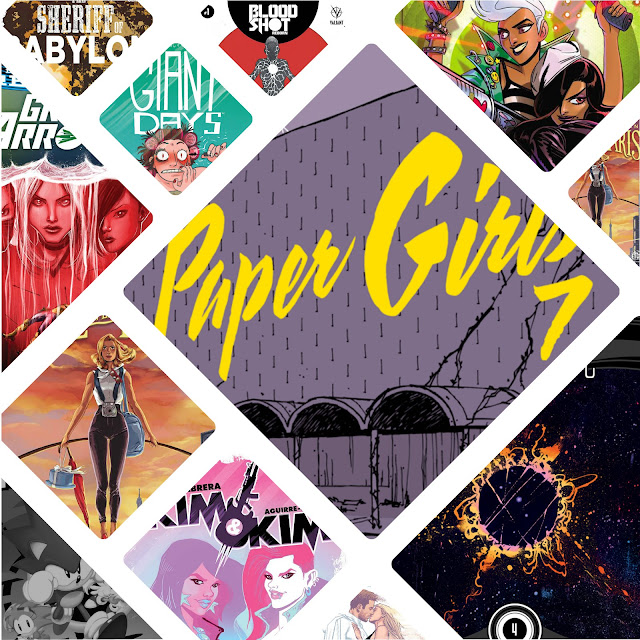 Back from vacation and I'm overwhelmed with so many great new comic book releases. I've selected just a small collection of notable new books to check out but there are plenty more to seek out. From one of the Big Two, DC Comics continues to make their Rebirth titles worth buying again with traditional storytelling and great art. You really can't go wrong with any of them this week. I've highlighted Batman and Green Arrow below.

On the indie side, Roche Limit Monadic comes to a close from Michael Moreci, Kyle Charles, and Matt Battaglia. The sci-fi passion project that became an acclaimed trilogy goes out with a bang. Kim & Kim is a wild tale of interdimensional bounty hunters   that puts queer women and trans women front and center. Giant Days is always a winner, Paper Girls is BKV and Cliff Chiang's ode to childhood sci-fi adventure, and Gwenda Bond, Kate Leth, and Ming Doyle bring a new mini, set within the world of Bond's exotic, magical Cirque American, Girl Over Paris.

Check these and other new titles this week. As always, play the slideshow with great music. This week it features Twenty One Pilots from the 'Suicide Squad' movie soundtrack with 'Heathens.' Happy reading! 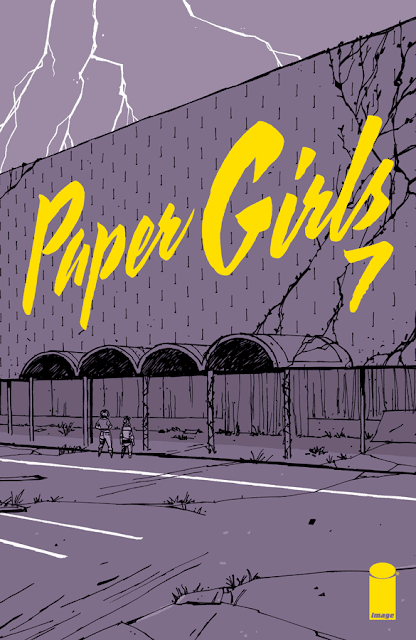 (W) Brian K. Vaughan (A/CA) Cliff Chang
Trapped in a dark future, Erin and her fellow deliverers from 1988 uncover shocking truths about their own fates. 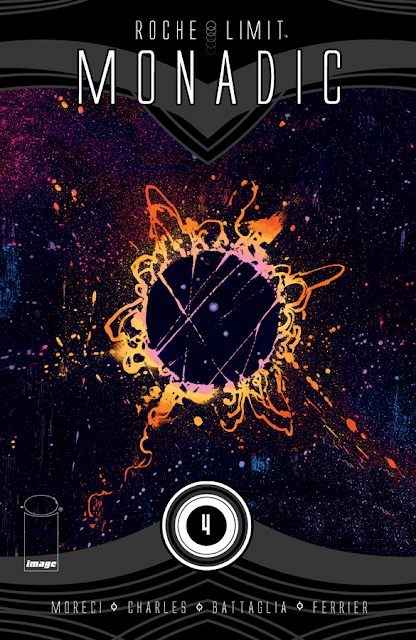 (W) Michael Moreci (A/CA) Kyle Charles
MINISERIES CONCLUSION
This final issue of ROCHE LIMIT brings the acclaimed, existential, mind-bending saga to a close. But not before some crazy sh*t goes down! Can humanity be saved and the Black Sun stopped once and for all? 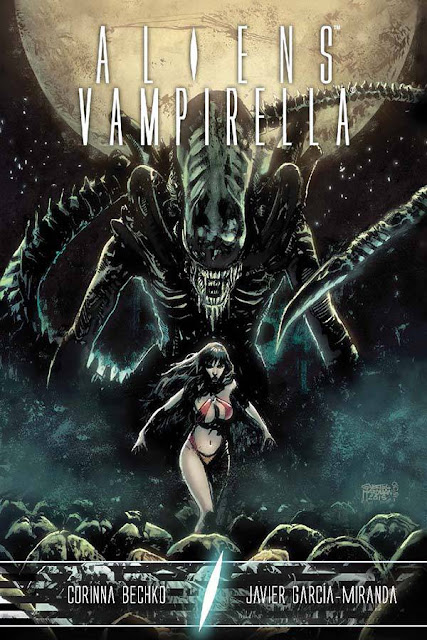 (W) Corinna Bechko (A) Javier Garcia-Miranda (CA) Gabriel Hardman
Two iconic horror franchises collide, as Vampirella - the fan-favorite supernatural heroine - faces the most nightmarish creatures ever to appear in cinema: the Xenomorphs from Alien! As the first human colony on Mars digs deeper into the crimson soil, they discover the catacombs of a hibernating civilization, tens of thousands of years old. The evidence suggests that they are Nosferatu, an ancient and sinister species that Vampirella is all too familiar with. Called to the Red Planet to investigate, the monster hunter and her human allies find a chamber with hundreds of ellipsoidal, leathery eggs... and after they hatch, the true horror begins. In space, no one can hear Vampirella scream! 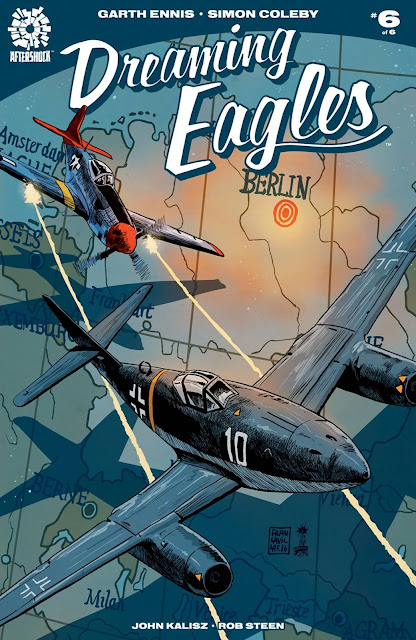 (W) Garth Ennis (A) Simon Coleby (CA) Francesco Francavilla
FINAL ISSUE. In the skies above the Nazi capital, the men of the 332nd fight their ultimate battle, assuring their place in history for all time. But back home in the US a violent welcome awaits, and Reggie and Fats discover the terrible cost of progress. The legacy of the Tuskegee Airmen is not one all Americans can accept... 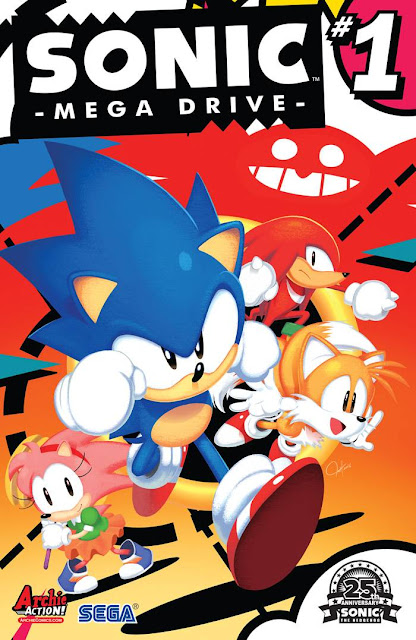 (W) Ian Flynn (A) Matt Herms, Tyson Hesse (CA) Tyson Hesse
Sonic spins into a brand new, Classic-styled, Super Special one-shot "Mega Drive"! Join Sonic, Tails, Knuckles and Amy Rose on a brand new adventure-set after the fall of the Death Egg! The nefarious Dr. Eggman is trying to build a new engine of destruction: the Megadrive, and it's up to Sonic and his whole crew to stop the mad doctor and save the day! Join Sonic and his friends in this special commemorative issue celebrating the 25th Anniversary of the Blue Blur! 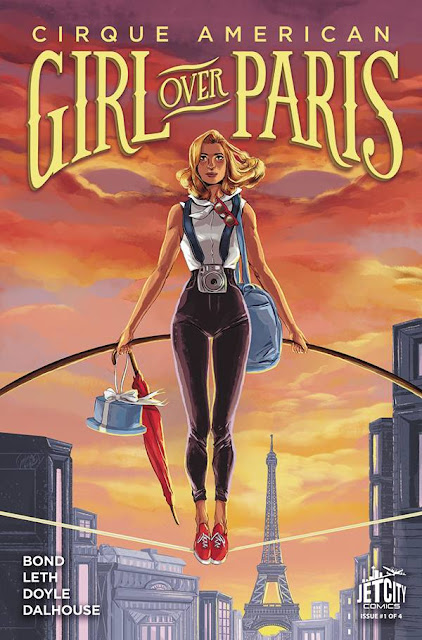 (W) Bond,, Kate Leth (A/CA) Ming Doyle
From bestselling writer Gwenda Bond (Lois Lane: Fallout), this four-issue comic book series, written by Kate Leth (Patsy Walker A.K.A. Hellcat, Adventure Time: Seeing Red) features a new stand-alone story set within the world of Bond's exotic, magical Cirque American. After a high-profile tumble, Cirque American's star wire walker, Jules Maroni, has a lot to prove-and her invitation to an exclusive exhibition in Paris looks to be just the opportunity to put her back on top. Unfortunately, the City of Lights glitters with distractions, including the presence of her first serious boyfriend and a mysterious figure haunting the venue. 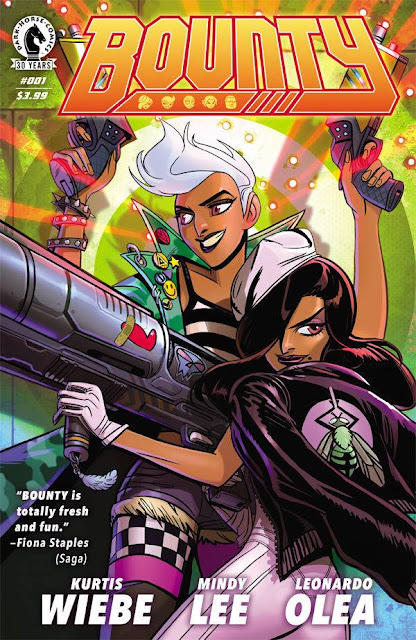 (W) Kurtis J. Wiebe (A/CA) Mindy Lee
The Gadflies were the most wanted criminals in the galaxy-robbing corporations to redistribute wealth to the destitute. Now, with a bounty to match their reputation, the Gadflies are forced to abandon banditry for a career as bounty hunters . . . 'cause if you can't beat 'em, join 'em-then rob 'em blind! 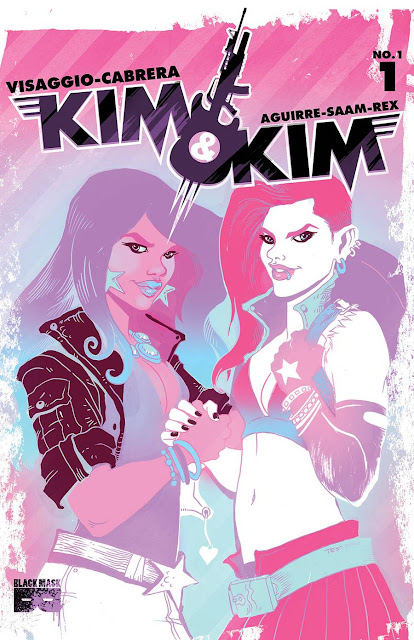 (W) Magdalene Visaggio (A) Eva Cabrera (CA) Tess Fowler & Various
Kim & Kim are twentysomething besties out to make a name for themselves in the wild world of interdimensional cowboy law enforcement. In a massive "screw you" to their parents and the authorities, they decide to hijack some high stakes bounty - and end up in way over their heads. Kim & Kim is a day-glo action adventure that's bursting with energy and enthusiasm. It puts queer women and trans women front and center, with a story that embraces the absurd alongside realistic pathos. It's a mature book that focuses on the power and meaning of female friendships as engines of validation. 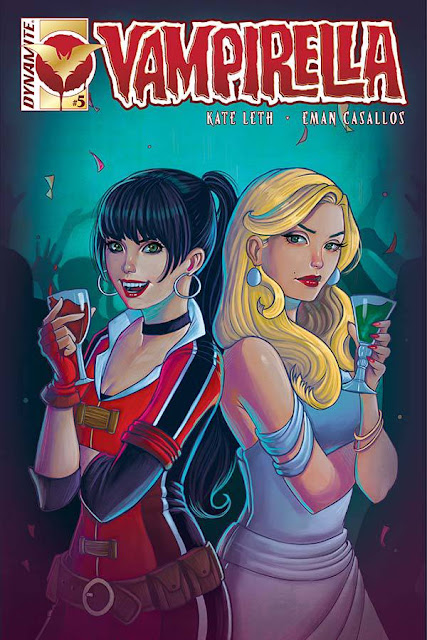 (W) Kate Leth (A) Eman Casallos (CA) Chrissie Zullo
What do you get when you put two werewolves, a telepath, a vampire from space, and a demonically-charged horror queen in the basement of a mansion filled with monsters? You get the fifth issue of Vampirella, that's what - the epic conclusion to our first arc! 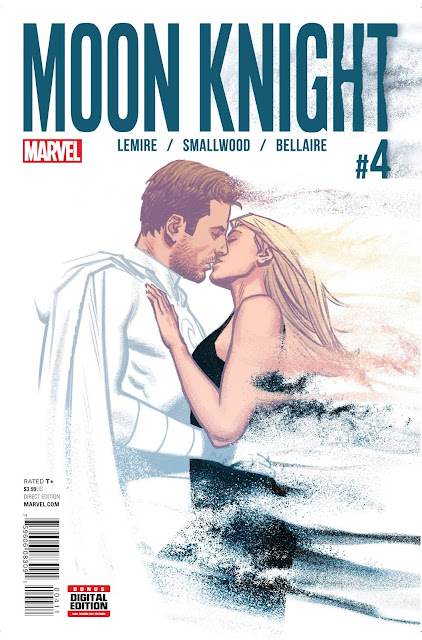 (W) Jeff Lemire (A/CA) Greg Smallwood
"NOT IN BLOOD, BUT IN SAND."
•  MARC SPECTOR and his fellow asylum patients - FRENCHIE, GENA and MARLENE - finally reach street level.
•  But Marc doesn't see streets. He sees New York City sinking in the sands of NEO-EGYPT!
•  How much of himself - and how many more friends - will Marc lose before he reaches his true enemy?
Rated T+ 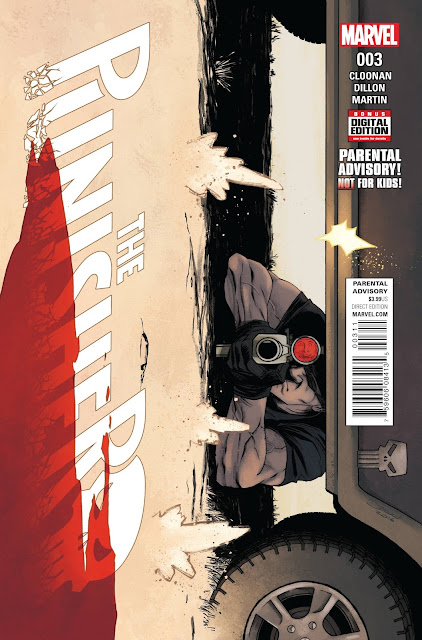 (W) Becky Cloonan (A) Steve Dillon (CA) Declan Shalvey
STRAIGHT TO HELL!
•  On the trail of horrific drug EMC, FRANK CASTLE lands on the doorstep of a crew of bloodthirsty Appalachian warriors.
•  But the leader of the group knows THE PUNISHER's brutal style, and is prepared to fight fire with fire...on an innocent bystander!
•  In the midst of the carnage, how will Frank weigh the crimes of CONDOR against the life of an innocent?
Parental Advisory 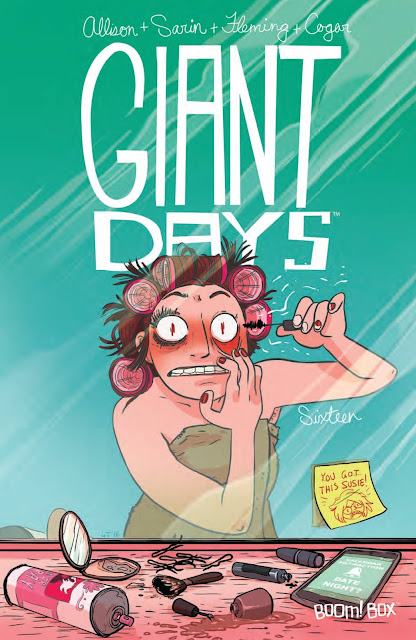 (W) John Allison (A) Max Sarin (CA) Lissa Treiman
Daisy has to draw on new reserves of inner strength after she loses control of a party of prospective students on an open day, while the "lonely, unlovable spinster" Susan tries dating again with disastrous results. 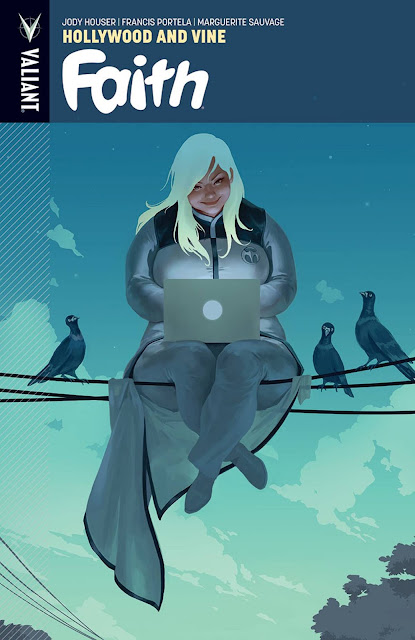 Orphaned at a young age, Faith Herbert - a psionically gifted "psiot" discovered by the Harbinger Foundation - has always aspired to greatness. But now this once ordinary teenager is taking control of her destiny and becoming the hard-hitting hero she's always known she can be - complete with a mild mannered secret identity, unsuspecting colleagues, and a day job as a reporter that routinely throws into her harms way!

Well, at least she thought it would... When she's not typing up listicles about cat videos, Faith makes a secret transformation to patrol the night as the City of Angels' own leading superhero - the skysoaring Zephyr!

But flying solo is going to be tougher than she ever thought when Zephyr uncovers a deep-rooted alien conspiracy. Two-bit burglars and car thieves are one thing, but when the world needs a hero to stave off a full-blown extraterrestrial invasion, will Faith find herself in over her head...or ready for her biggest challenge yet? 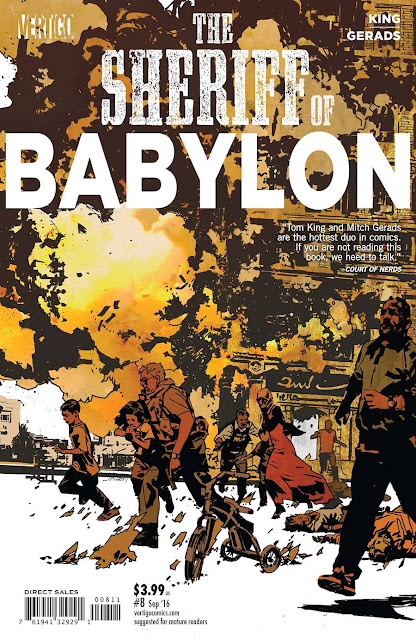 (W) Tom King (A) Mitch Gerads (CA) John Paul Leon
Chris and Sofia are in the wrong place at the wrong time when a bomb goes off, threatening to add two more corpses to the body count that's been growing on their own mission to get back at the murderers who started them on this path to begin with. 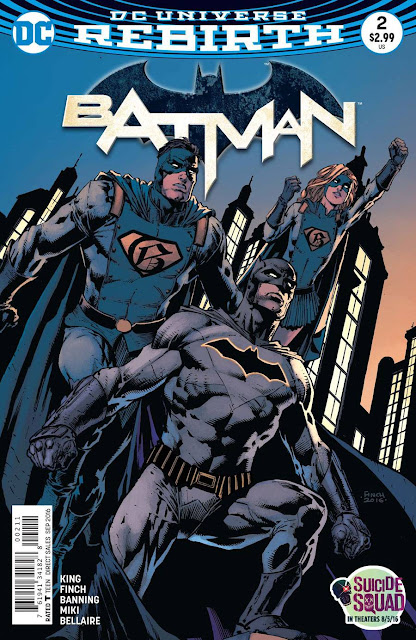 (W) Tom King (A/CA) David Finch, Matt Batt Banning
"I AM GOTHAM" Chapter Two: In issue #2, after a brush with disaster, Batman struggles to reconcile the fate he could be leaving behind for his city, and reaches out to the idealistic new hero, Gotham. But an evil is building that may overcome both Batman and his new ally. 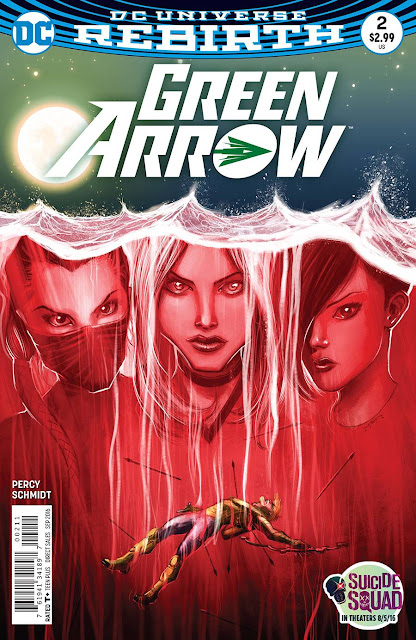 (W) Ben Percy (A) Otto Schmidt (CA) Juan Ferreyra
"THE DEATH AND LIFE OF OLIVER QUEEN" Chapter Two: In #2, Green Arrow is betrayed, broken and left for dead. He wakes up in a world where the once-wealthy Oliver Queen has no resources and only the faintest clue what's happened to him. Meanwhile, in a distant land, an old ally begins a quest to help the Emerald Archer in his darkest hour. Get up close and personal with the fearless Bloodshot epic of the summer with this 48-page special, stripping down BLOODSHOT REBORN #14 to pencils, inks, and letters alone! Spotlighting Mico Suayan’s brutally immaculate pencil artwork alongside Lemire’s complete script, Valiant’s next essential Director’s Cut must be seen to be believed! Experience BLOODSHOT ISLAND in the purest form possible right here with an all-access presentation of the savage first issue featuring the first appearance of the character that has everyone talking: DEATHMATE! 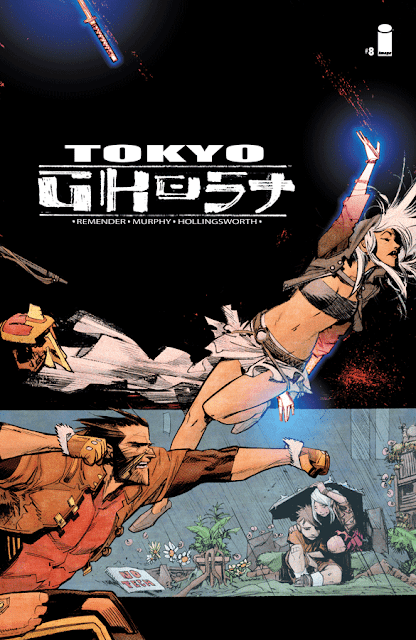