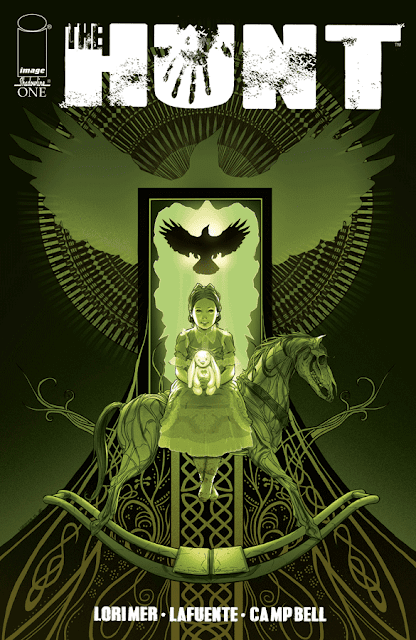 Colin Lorimer is a creator on the rise. He's already a talented artist whose work on BOOM! Studios' 'Burning Fields' recalled the best of Michael Lark and Michael Gaydos. His dark moody art helped make it one of the best comics of the year. Now, as both artist and writer, he introduces us to another dark realm this one inspired by Irish mythology, The Hunt.

Orla is young girl haunted from witnessing her father's soul being stolen by the Slaugh, a spirit cursed to roam earth seeking souls to consume, years earlier. Mocked and bullied for being different, Orla doodles in class often including monsters like the Slaugh. It's unclear what part she plays in all this. Can she see these lost souls and the monster that took them? Is there an impending disaster she can feel approaching? Is it the Slaugh? It's hard to say as Lorimer makes sure these things remain steeped in mystery.

The entire tone of the issue is eerie and menacing. The opening sets the stage for what terror lurks ahead. The splash page early on is a work of horror magic. Emboldened by Joana Lafuente's colors, the frightening scene is sharply delivered with gripping detail. There are some great elements throughout even though some story points don't correlate. Some transitions are unexplained, we don't know how these characters interconnect. The Irish dialect takes some getting used to but shouldn't deter anyone from reading 'The Hunt.' It adds to its charm and ties it to the mythology being examined.

Lorimer's art is still the draw here as the story unfolds awkwardly. Drenched in shadows, close-ups, and Lafuente's colors, 'The Hunt' pulls you into the darkness, suffocating you with unease, and shocking your eyes at the end. Lorimer knows how to frame a scene, the layout is solid and develops with good pacing. It's just the glue between scenes that are missing.

'The Hunt' takes a unique approach with Irish mythology and modern setting. Lorimer has put together a supernatural story with good bones that intrigues enough to want more. The art perfectly captures the terrifying tension from the beginning and hovers throughout. 'The Hunt' could develop into the best horror comic with an even better follow-up issue. It's worth getting on board now.