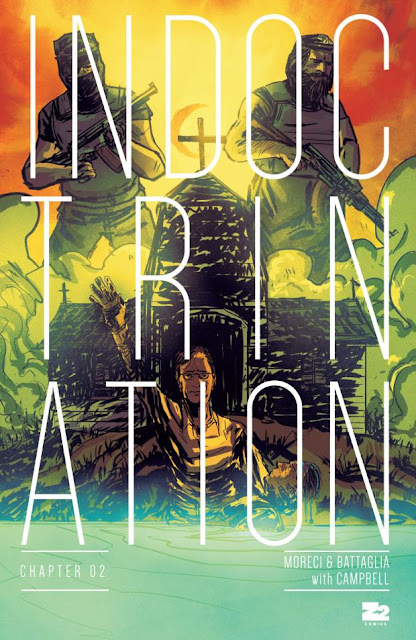 'Indoctrination' #2 raises the stakes, blurs the lines of justice, and takes you deeper into the rabbit hole. Michael Moreci is known for his fluid dialogue and political intrigue but Matt Battaglia brings the gritty, muddy, world to life with the same reckless abandon as the characters.

The beauty of indie comics is the energy it provides the medium with morally ambiguous characters doing objectionable things to meet an end. You won't find this kind of bravado from the Big Two no matter how hard they try to seem "edgy" and "dark." With 'Indoctrination,' Z2 Comics has itself a sort of Homeland/True Detective hybrid that delves into the gray areas of federal investigation that are usually left classified especially when it comes to terrorist suspects.

Georgia and Trent continue their pursuit of the killer with the serpent tattoo. No one seems more determined than Georgia who's willing to do whatever it takes to get a lead. Capturing the tattoo artist is the first step. They first have to get through a Mexican cartel on their own and off the books to get to him. It's complicated since they recruited Denton, took him out of prison, and now CIA handler Huxum is looking to get the suspected terrorist under his control and away from Georgia and Trent. Their long term goal is to get to the terrorist Sahir but will that get derailed with Huxum's interference?

Battaglia's dark sketchy lines amid his vibrant colors are the ultimate example of contrast in a story of full shady characters. There's no black and white, literally and figuratively, in this story and Battaglia's style isn't designed to be crisp and clean in a world as ugly as this. The pacing and layouts hit the right beats from one scene to the next.

If you enjoy crime procedurals that are dark, mired in political intrigue and suspense then 'Indoctrination' is for you. Moreci and Battaglia have brought an intelligent, intense, crime drama to comics that is completely riveting. Do yourself a favor and get your hands dirty with 'Indoctrination.'