Deathstroke as Nemesis to Affleck's Batman is a Refreshing Change 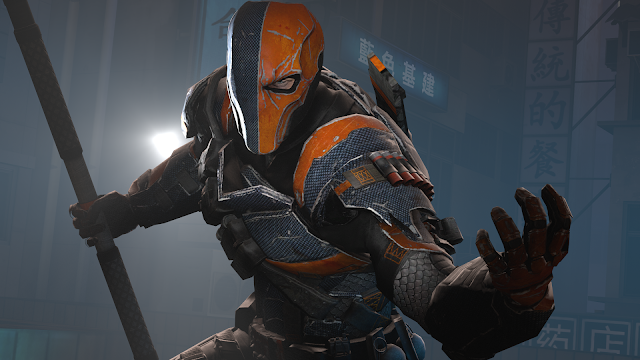 When you think of Batman's long line of villains you think Joker, Penguin, Riddler, Catwoman, and Poison Ivy. If you're director of the Batman solo film, Ben Affleck, you have other DC Comics characters in mind. As evidenced by the video tease on his Twitter feed Monday morning, it looks like Deathstroke will have his big screen debut.

The Wrap reported shortly after Affleck's mysterious video that Deathstroke will be the main antagonist in the standalone Batman movie. So that helps explain what could be test footage of Slade Wilson, mercenary, and assassin, also known as Deathstroke the Terminator. Could he have a part in setting up the Batman solo with a cameo in 'Justice League'?

Created by Marv Wolfman and George Perez in 1980, Deathstroke first appeared in 'The New Teen Titans' #2 and went on to become DC's deadliest assassin and went from mercenary to villain to anti-hero back to supervillain over his history. He terrorized the Teen Titans primarily but found ways to be a menace to the Justice League including Green Arrow and occasionally Batman. Pitting him against the Dark Knight is a refreshing and unexpected turn that could lead to new storytelling opportunities as well as an epic fight between two of DC's most skilled hand-to-hand combatants. Seemingly avoiding traditional Batman foes that have long been part of popular culture for an unpredictable but formidable new rival. Forget the wacky shenanigans offered from a Riddler or Penguin and expect a more cerebral and strategic villain in Deathstroke.

Deathstroke possesses various enhanced abilities granted by an experimental serum including superior strength, heightened speed, stamina, endurance, and reflexes. He's multilingual, a tactical genius, capable of using more of his brain than a normal person and through his military training is one of the best fighters in the nation using various martial arts and weapons. He also has an accelerated healing factor that allows him to recover from wounds much quicker. Slade is virtually superhuman despite the loss of one of his eyes.

It shouldn't come as a complete shock that Deathstroke is being used in the DC film, 'Arrow' executive producer Marc Guggenheim revealed that despite appearing on the show's first two seasons a return wasn't likely. "The character of Slade Wilson is currently tied up in another DC project," Guggenheim told fans back in February. It appears that project is Affleck's Batman movie.

Deathstroke has also appeared on Lois & Clark, Smallville, the animated Teen Titans television series, Young Justice, and Beware the Batman. No word on casting yet and Warner Bros has yet to confirm the rumor.