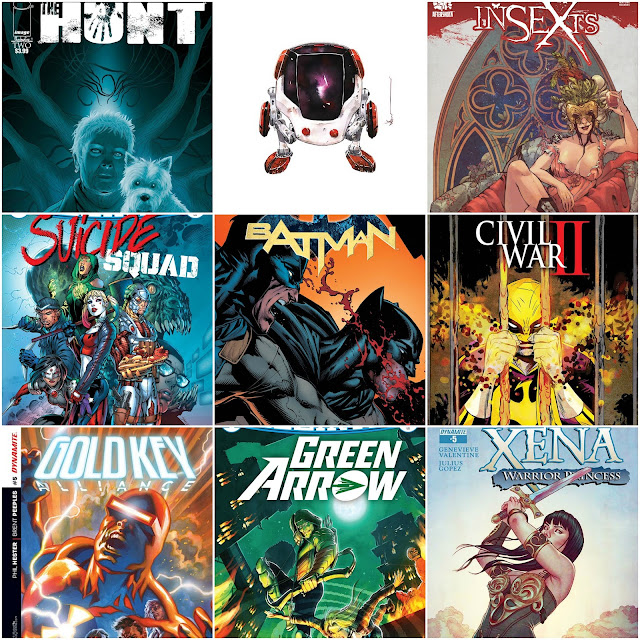 Another week, another batch of great DC Comics' "Rebirth" titles. Batman, Green Arrow, Suicide Squad, Supergirl, and more are out this Wednesday after a successful July that has DC finally competing with Marvel for top ten sales. Don't miss out on other books from other publishers like AfterShock's InSexts #7, IDW's Rocketeer at War trade, and many new issues from Image - The Hunt #2, Horizon #2, and Descender#14 from Eisner Award-winning creators Dustin Nguyen and Jeff Lemire. Also, check out the newest series from Brian Wood and Briggs Land from Dark Horse Comics. There's so much more too. Happy Reading! 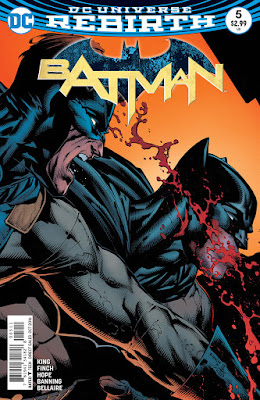 (W) Tom King (A/CA) David Finch, Matt Batt Banning
"I Am Gotham" part five. In the final chapter of this epic, is Batman truly the hero Gotham City deserves-or does it deserve better? In this ultimate showdown, where the line between allies and enemies blurs, the question will finally be answered...and the fate of Gotham will be decided. 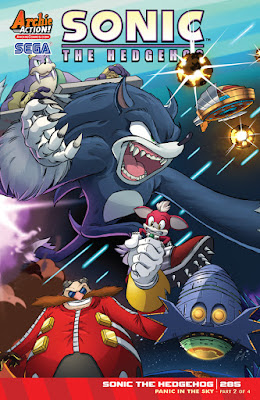 (W) Ian Flynn (A) Terry Austin, Diana Skelly (CA) Dan Schoening
"Panic in the Sky," Part Two. Sonic and the Freedom Fighters have faced a crushing defeat at the hands of Dr. Eggman and his entire evil Eggman Empire! Now it becomes a race against time to get back in the fight and save the day!  But when Dr. Eggman uses Chip and the power of the Chaos Emeralds, are our heroes already too late? Featuring the second of four connecting covers by comics pro Dan Schoening plus a "Gaia Colossus" variant by the excellent Evan Stanley! 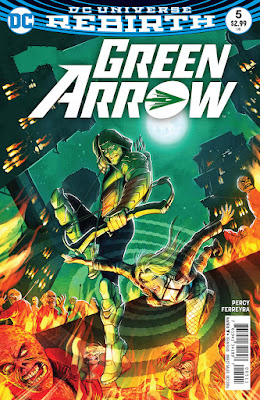 (W) Ben Percy (A/CA) Juan Ferreyra
"The Death and Life of Oliver Queen" part four! Black Canary steps through the deadly gates of Inferno, the global super-villain answer to Fort Knox, to discover the truth behind the destruction of Oliver Queen's life, fortune and reputation. Meanwhile, Seattle's manhunt for the outlaw Green Arrow takes an exhilarating twist when an old frenemy makes an unexpected return.
"The Death and Life of Oliver Queen" part five! It's Green Arrow and Black Canary versus Shado and the Ninth Circle in the belly of the Inferno. 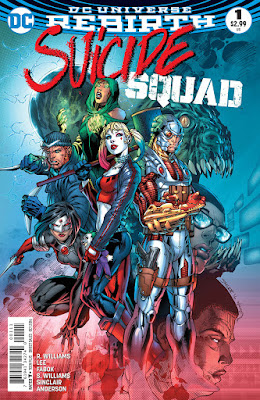 (W) Rob Williams (A) Jason Fabok (A/CA) Jim Lee, Scott Williams
"The Black Vault" part one! When a mysterious and definitely super-important cosmic item falls out of the heavens and into enemy hands, America has only one option: Task Force X, Amanda Waller's strike team of incarcerated super-criminals. A one-stop-shop for plausibly deniable espionage and ultra- violence, this "Suicide Squad" only handles missions they're not expected to survive. An insane new era of SUICIDE SQUAD begins here with superstar artist Jim Lee and red-hot writer Rob Williams (UNFOLLOW, MARTIAN MANHUNTER). 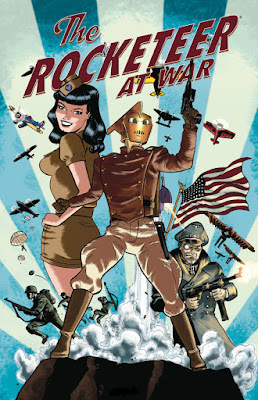 (W) Marc Guggenheim (A/CA) Dave Bullock
Europe, 1942-the world is at war! As the Allies battle against the Axis, able bodied men everywhere enlist in the war effort, including Cliff Secord. Secord, also known as The Rocketeer, has been thrust full throttle into the heat of battle, and-with or without his jet pack-he will depend on his wits and daring if he is to survive! Collects issues #1-4. 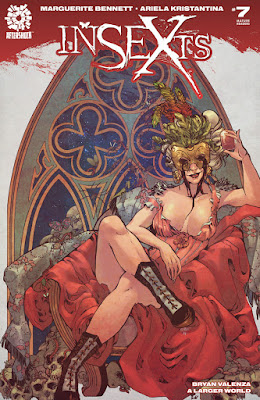 (W) Marguerite Bennett (A/CA) Ariela Kristantina
In the finale of our first arc, Lady, Mariah and their allies race through the lair of the venomous Hag who holds her victims in a deadly thrall! Hearts rip, heads roll, and the lovers pay the final price for their freedom... 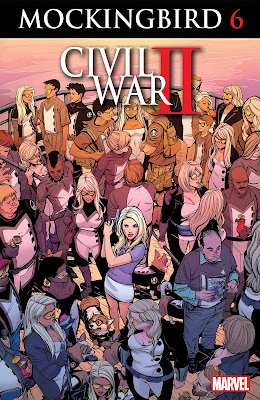 (W) Chelsea Cain (A) Kate Niemczyk (CA) Jo?lle Jones
CIVIL WAR II TIE-IN!
•  A top secret mission on behalf of an old friend, a tropical cruise. What could go wrong? Turns out it's a theme cruise - super-hero themed, naturally - a floating comic con. Now Bobbi is trapped on a boat with a thousand cosplayers, caped colleagues she was trying to avoid, an ex-boyfriend who keeps showing up at inopportune times and a rampaging herd of corgis.
•  When a passenger is murdered, Bobbi must play Hercule Poirot to find the killer and confront some uncomfortable truths from her past in the process.
Rated T+ 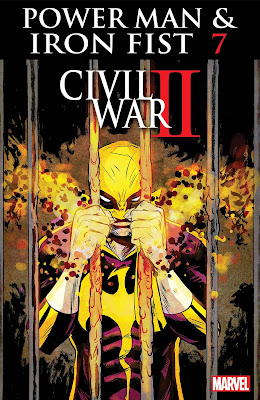 (W) David Walker (A) Flaviano (A/CA) Sanford Greene
CIVIL WAR II TIE-IN!
•  The IRON FIST is behind IRON BARS!
•  DANNY and LUKE are on the same side, but predictive justice vigilantes PREEMTIVE STRIKE split them up!
•  Will Danny's new criminal allies protect him from all his old criminal enemies?
Rated T+ 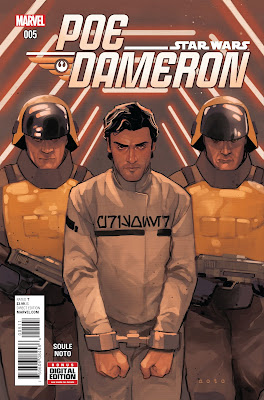 (W) Charles Soule (A/CA) Phil Noto
• Black Squadron's been locked away in a Republic prison!
•  But they're not locked in there with us, they're locked in with...Terrex?!
•  Can Poe and co. get the info they need and get free?
Rated T 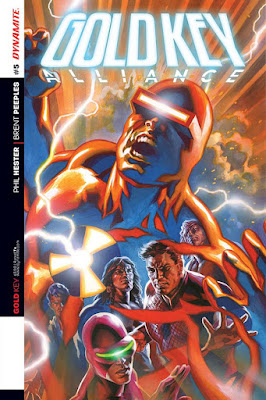 (W) Phil Hester (A) Brent Peeples (CA) Felipe Massafera
With their universe being torn apart, Turok, Magnus, Samson, and Solar are lured by Dr. Spektor into a strange dimension where only the ultimate sacrifice will be enough to preserve reality. Do not miss the soul-searing climax to this critically acclaimed series! 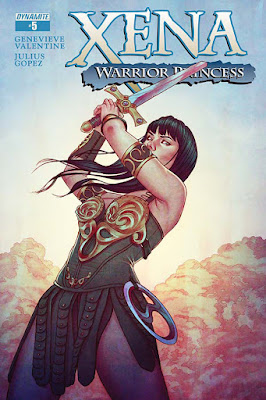 (W) Genevieve Valentine (A) Julius Gopez (CA) Jenny Frison
The daring rescue of Chilapa and the captive Harpies has made Xena into Rome's newest, greatest enemy... just like old times! It will bring the might of an empire to Xena's doorstep... and Gabrielle is going to stop it, by any means necessary. All roads lead to Rome! 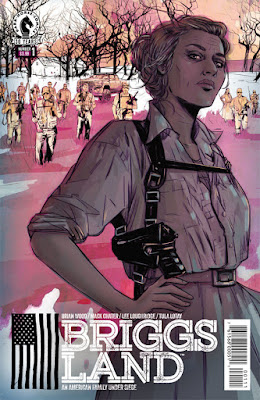 (W) Brian Wood (CA) Brian Wood (A/CA) Mack Chater
Briggs Land, nearly a hundred square miles of rural wilderness, contains the largest antigovernment secessionist movement in the United States. When matriarch Grace Briggs wrests control of the operation from her incarcerated husband, she sparks a war within the community-and her immediate family-that threatens to bring the full power of the federal government down on their heads.

o Perfect for fans of Sons of Anarchy and Justified!

o In development for an AMC television show! 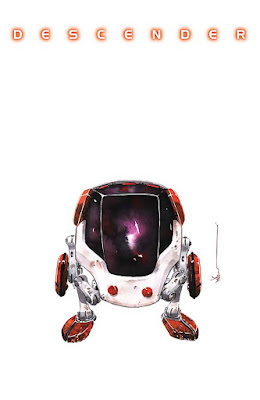 (W) Jeff Lemire (A/CA) Dustin Nguyen
"SINGULARITIES" continues as the secret history of everyone's favorite pet-bot, Bandit, is revealed. What did Bandit do on the mining colony all those years while Tim-21 slept? And what does it mean for the future? 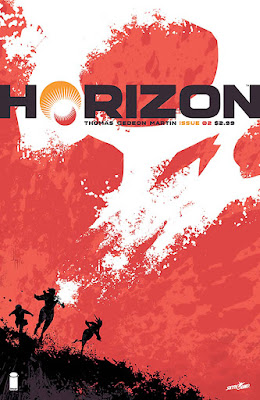 (W) Brandon Thomas (A) Juan Gedeon (CA) Jason Howard
Zhia Malen is not the only newcomer on our planet. Now, Earth will meet the rest of her squad, as their six-fingered hands hover over humanity's throat. The retaliation against Earth has already begun... we just don't know it yet. 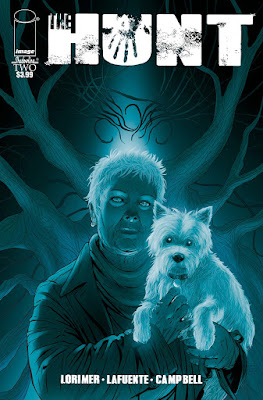 (W) Colin Lorimer (A/CA) Colin Lorimer
It all began with witnessing her dying father's soul being ripped from his body by demonic soul-stealers known as the Sluagh. Now with the ability to step between two worlds-the otherworld and ours-and with an army of changelings harvesting souls, it would seem the nightmare has only just begun for Orla Roche.