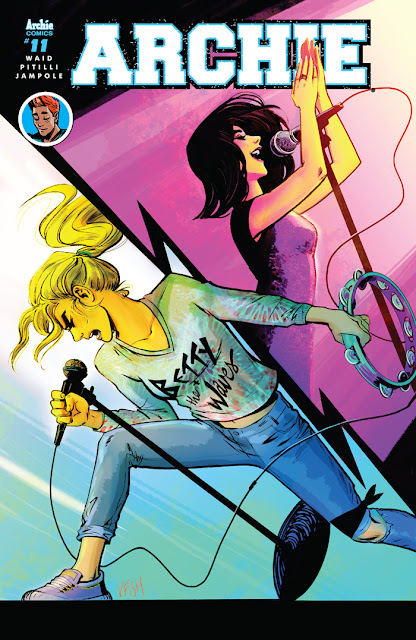 The line has been drawn. Two bands enter, only one comes out on top. With Veronica's popularity waning after her father's mayoral campaign drives his opponent, an equally loved and reviled teacher who happens to be Betty's uncle, out of town she and Team Ronnie form a band to win back the public. Still steaming and hurt, Betty does the same as the two meet at the Battle of the Bands.

It's a classic showdown between rivals in a familiar trope that reveals the emotional state of both Veronica and Betty. Seeking to get back in the good graces of her fellow Riverdale classmates, Veronica enlists Archie and Jughead to form "The Ronnies" (what else, of course) and win the school's talent contest. It's an interesting way to make good to half the student body but for someone used to the limelight as a reality star it makes perfect sense.

Betty is incensed when she hears The Ronnies rehearse, she demands her friends form a band of their own. "Betty and the Waves" are born with Sayid, Moose, Dilton, and Toni. It becomes an outlet for Betty's rage, banging on drums and spitting out some angry lyrics. Needless to say, Team Betty is concerned.

Mark Waid usually adds some deeper meaning to Archie and the gang's shenanigans but this whole rivalry between Veronica and Betty should have been handled more directly than the passive aggressive route Betty takes here. She shows some immaturity in the way she handles her anger at Veronica and Archie. She alienates Sayid and has to be consoled by Toni. Ultimately, the battle of the bands doesn't resolve Betty versus Veronica but does reconciles Betty's friendship with Archie but way too easily. The plot seemed to be tied up far too cleanly considering the set-up.

In issue eleven we're also greeted by new artists, Ryan Jampole and Thomas Pitilli, whose work is excellent and in the same spirit of this new series. There's nothing wrong with the art but this revolving door of artists is a little dizzying. The rebooted series began with the award-winning Fiona Staples for three issues, then Annie Wu did issue four, Veronica Fish took over from there until this issue. That's five pencilers in the first eleven issues. Just when you've fallen in love with one particular look, you have to adjust again to someone else's style becoming extra critical of the difference. Jampole/Pitilli do fine work but isn't as clean as Fish's lines but do convey a sense of fun during the rehearsals.

'Archie' has become one of the best comics available. It's a testament to some of Waid's best work in years. So the bar has been set pretty high in only eleven issues. The fact that issue eleven isn't as good as we've become accustomed to is normal and probably a little unfair. We expect more but it's still a pretty good read despite the simple resolutions and shallow plot. And now we have to get used to new artists yet again. We're probably being picky because 'Archie' is still worth waiting for every month.