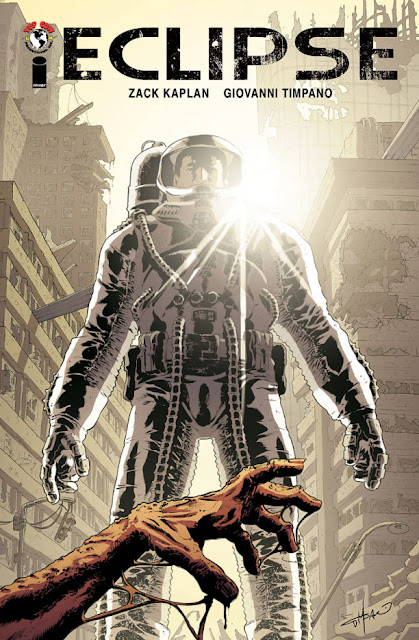 Any great comic starts with a great idea. 'Eclipse' #1 by Zack Kaplan and Giovanni Timpano is off to a good start thanks in part to their own unique dystopian future world where sunlight can kill you instantly. A cataclysmic solar flare wiped out billions driving survivors underground during the day. If that wasn't bad enough, there's a killer on the loose and a reluctant hero emerges.

David Baxter is just your normal working stiff, a solar engineer who dons an "ice man" suit to help maintain the electrical infrastructure above ground. Without the protective suit, he and his co-workers would burn to a crisp in seconds. It's a fascinating new twist in the post-apocalyptic genre with a very different New York City. It provides the perfect landscape to explore above and below ground as people have adjusted to being nocturnal and returning to their homes at curfew - sunrise.

Unfortunately for Baxter, the corporation that employs him enlists him to train a group of others to hunt down a murderer who killed after curfew. What happens next is a clever introduction to an already dangerous world made deadlier by an unknown killer that uses the toxic sun rays as a weapon. Kaplan broadens the scope of the series at the onset and slowly sharpens the story down to Baxter's conflict. 'Eclipse' combines sci-fi, horror, and mystery exceptionally well and that leads to a cliffhanger that works to hook the reader.

Timpano has a lot of world-building, both above and below ground, to do and does so with a mixture of intricate details and sweeping crowded scenes. He sometimes sacrifices details to incorporate so many elements in a scene. It doesn't suffer because of it but instead leaves space for Betsy Gonia's brilliant use of colors. In a world ruled by the sun, Gonia conveys a blinding scorching sun with whites and yellows that you can almost feel burn off the page. The book falls apart without her convincing portrayal of implied heat from the sun's death rays.

'Eclipse' #1 is an effective and unique dystopian murder mystery that draws you in. Kaplan takes a great premise and deftly executes a well-paced and intriguing sci-fi story. Art from Timpano and Gonia make it all work with an expansive world-building layout full of detail and color.